Mean Girls in the City: My NYC Bachelorette Party Weekend 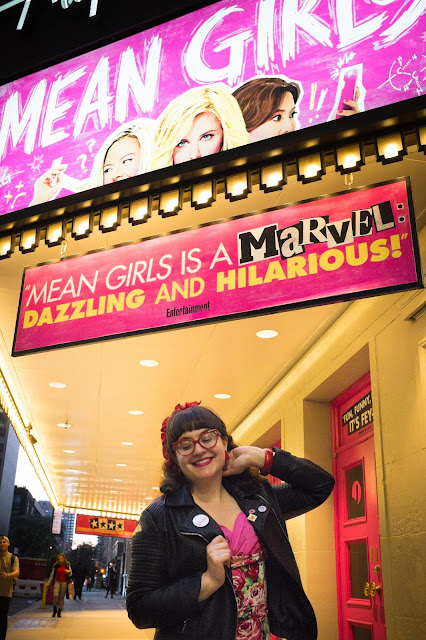 Well, well, well! If I am writing this post, it means I have survived my bachelorette party weekend in NYC with my girls! 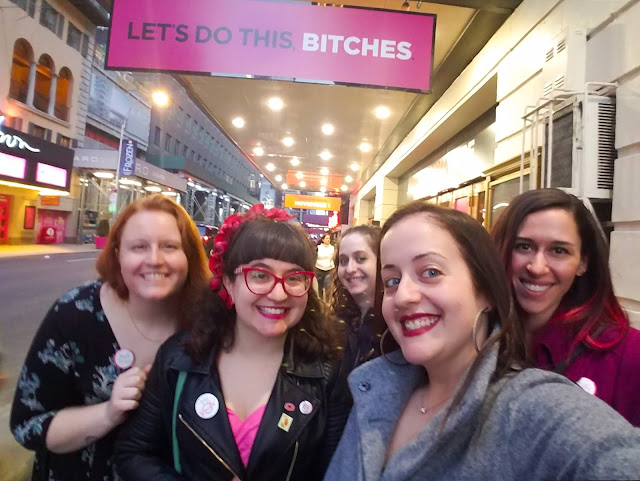 Saturday morning, we all climbed aboard what we fondly named the Party Whale (a rented black minivan Red decorated with decals that declared us Team Bride) and made the 3 1/2 road trip down to New York City for the weekend. 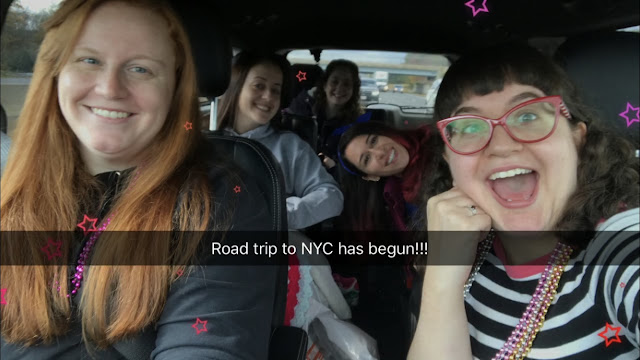 For the past 6 months (or more - these gals have been busy!), my sister, Emma, and my maid of honor, Red, have been in cahoots putting together my bachelorette party. To my surprise, it became a whole weekend in NYC that included dinner in an Italian restaurant followed up by Mean Girls on Broadway and a fun night in a hotel just outside of Times Square. 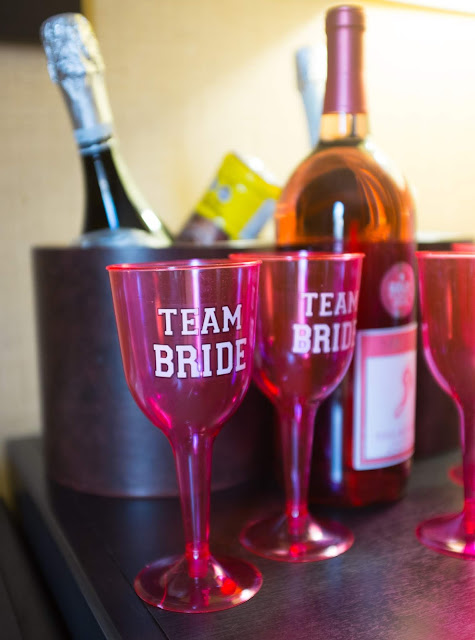 The weekend was just what I could have asked for - really, nothing was missing! We got to NYC in the afternoon. Once settled in at the hotel, we took a walk down to Times Square and did some shopping and wandering. We took my older sister, Tory, to the M&M store and Hershey World and she got to shop to her chocolate/candy loving heart's delight. Walking around Times Square is a destination in itself - there's so much to see with all the lit up billboards, street performers (impressive AND creepy ones are all over!), and stores. Then there are landmarks like Radio City Music Hall, the spot where the ball drops on New Year's Eve, Rockefeller Center, and then some!

Needless to say, there's SO much to see in NYC. We headed back to the hotel to get dolled up for dinner and the show and I even got to see Red and Tory, who are VERY against being girly, in dresses for a change! I was honored! 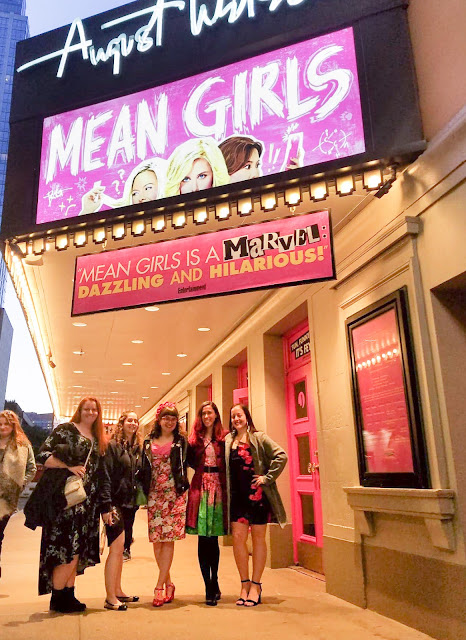 Red found an adorable (and delicious!) little Italian spot near the theater called Maria Pia and we had the perfect table out in their covered patio in back where it wasn't too crowded. We sipped on yummy cocktails and all devoured some of the most delicious and fresh pasta we ever had. Mine was simply fettuccine with mushrooms and it was hands down some of the best pasta I ever had in my entire life! I mean it! I was only slightly buzzed on champagne at that point so I'm not even exaggerating. 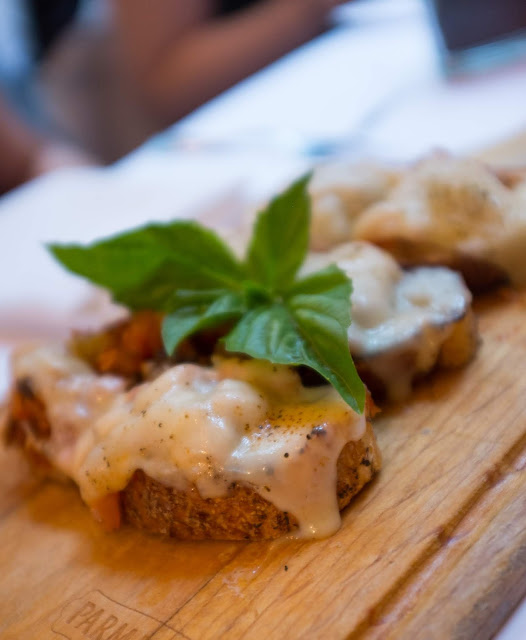 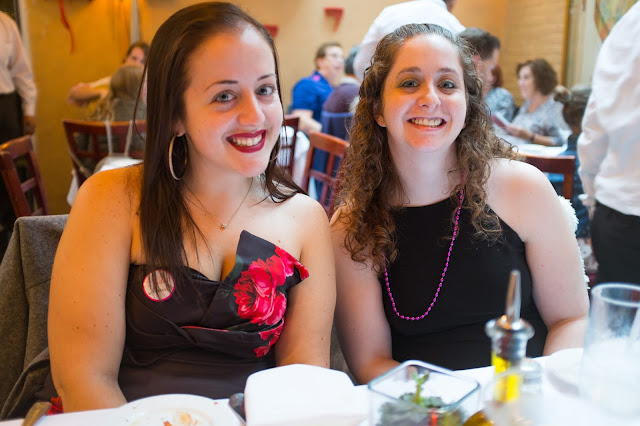 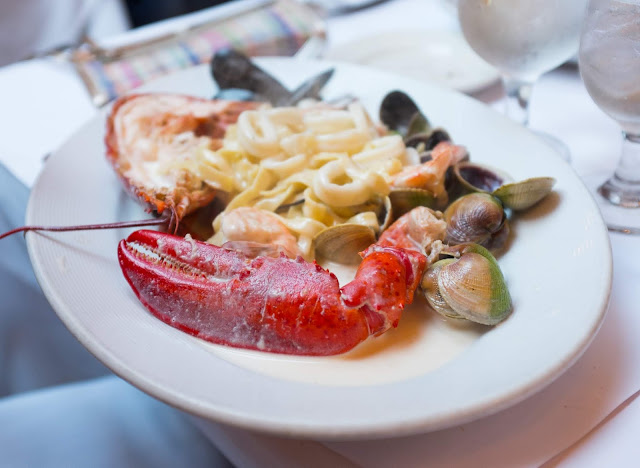 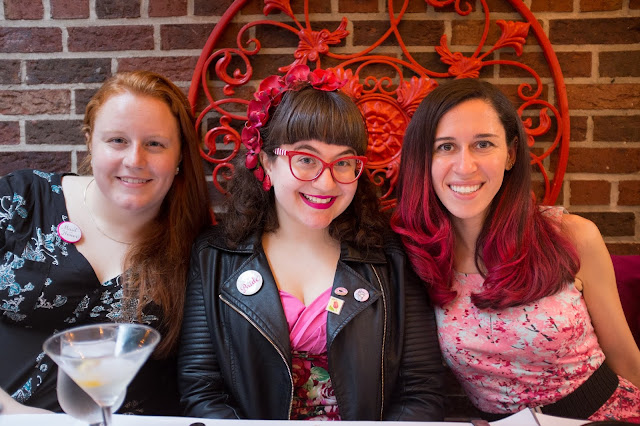 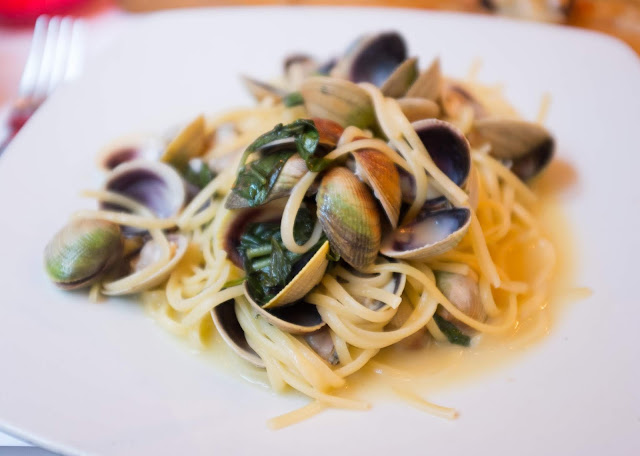 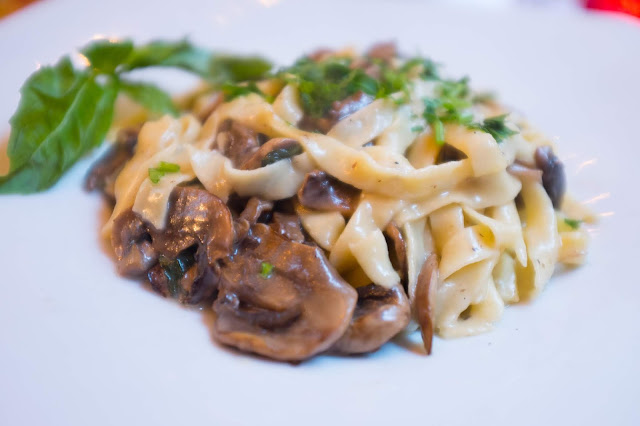 After dinner we had some time to kill so after we found the theater and successfully snapped some photos with the adorably pink exterior, we wandered down toward Rockefeller Center and got some dessert at Magnolia Bakery, one of my favorite stops when I am in NYC. I always get their banana pudding. It's heaven in a plastic cup. 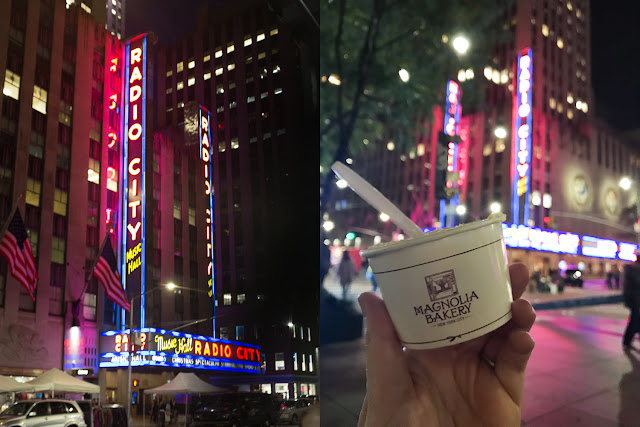 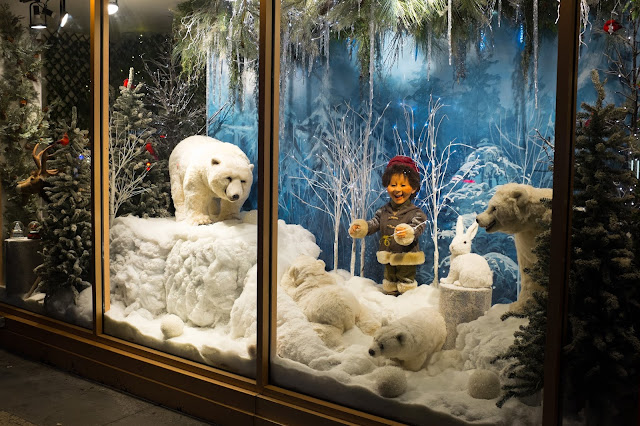 We also stopped in one of the city's Christmas Shops and I got a new ornament, which I am going to personalize with our wedding date at some point. These shops are open all year round (aptly called Christmas in the City) and it definitely seemed fitting to include it during my time there. I could live in these stores with their holiday cheer all year round! 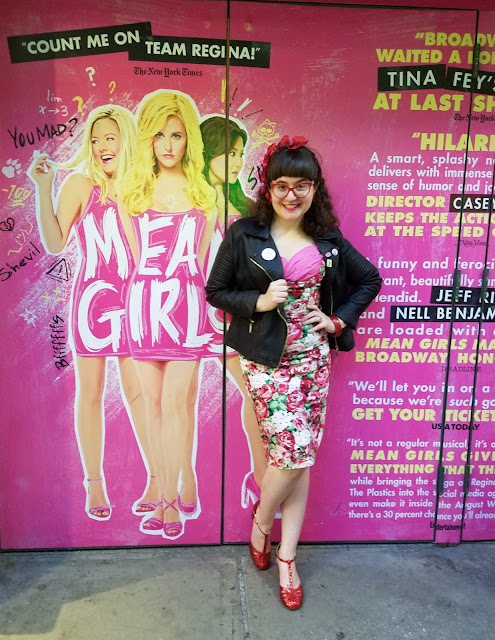 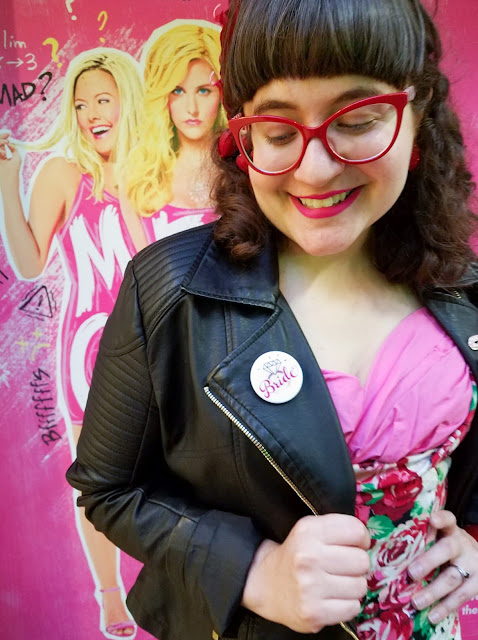 Back at the theater, we treated ourselves to an overpriced souvenir cocktail (mine was called "On Wednesdays We Wear Pink" and was made with Rose and other yummy fruity things) and took our seats. The show was AMAZING. Instead of physical sets/backdrops, they had HUGE screens stretched across the back of the stage and they used those to put up the backdrops or play animations as the show went on. It was pretty accurate to the movie - only updated to fit 2018 and had even more hilarious jokes. I LOVED it. 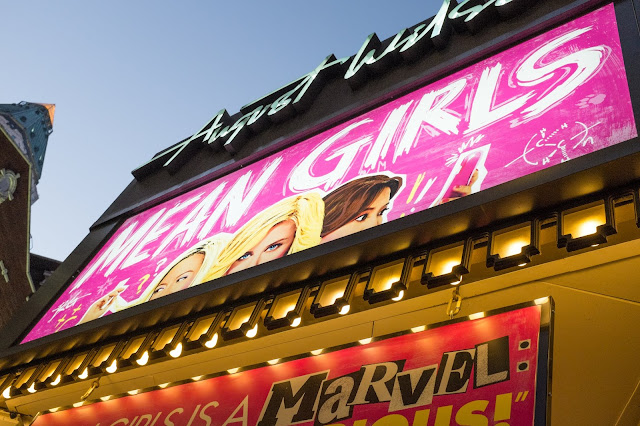 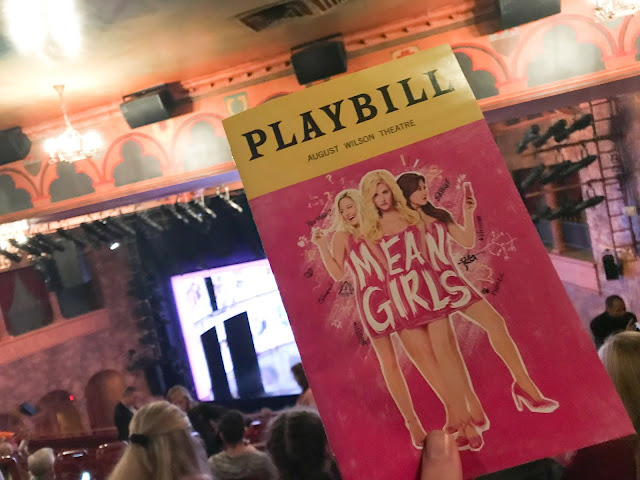 After the show, we took the walk back to the hotel and grabbed 99 cent slices of pizza on the way. I was happily buzzed by then and was ready for pajamas. Once we got back to our rooms, we got comfortable, poured more champagne, and basically had a slumber party with all its requirements - snacks, bubbly drinks, crappy TV, and a ton of laughter. So much so that around midnight, there was a knock on our door and a member of the staff let us know they had gotten a noise complaint! This only made us laugh MORE but we decided to call it a night by 1am and went off to sleep. 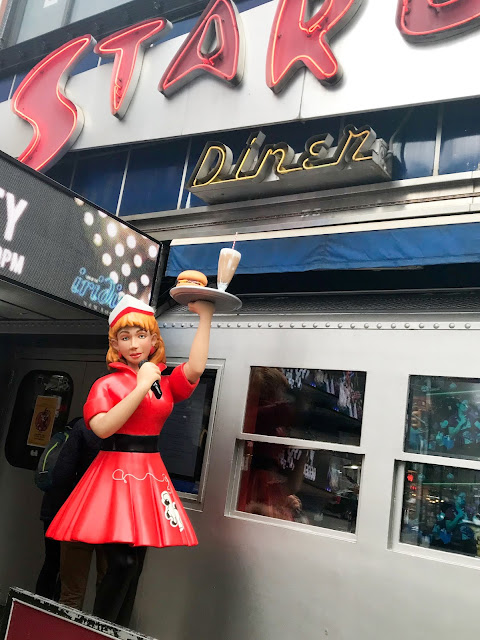 The next morning, we packed up the van, checked out, and headed back toward Times Square for brunch at the Stardust Diner. This was definitely one of my favorite parts of the weekend. The Stardust is a 2 level retro diner with singing waitstaff. They're constantly singing - one after the other - and every so often confetti will fall from the ceiling after a particularly fun number. It's only done every couple of hours or so and you're lucky if you get to witness it. 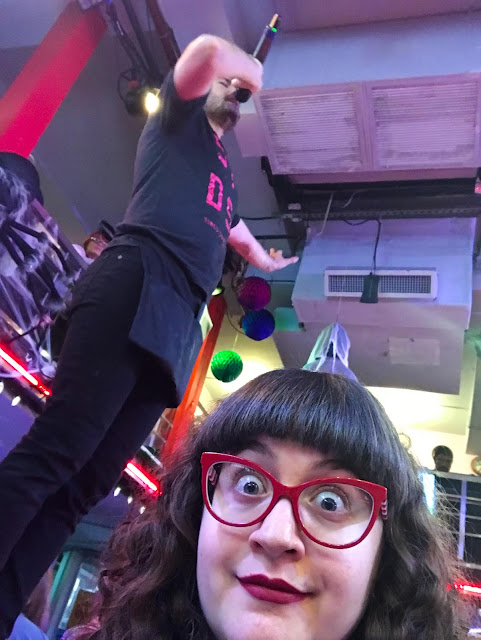 We enjoyed it thoroughly and even got to see the confetti after a waiter and waitress sang a Grease mashup on the booths around us. 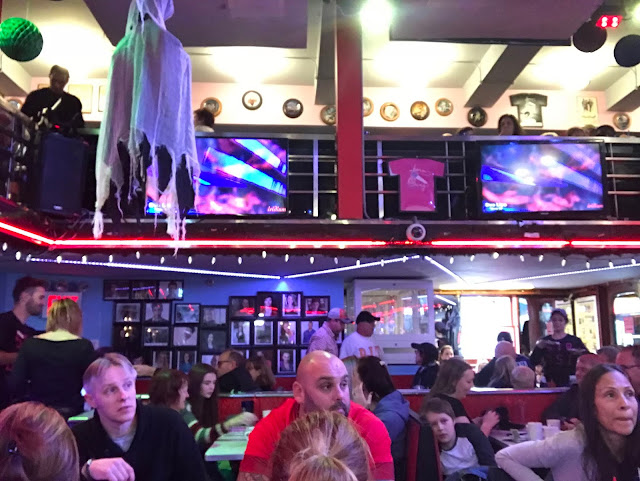 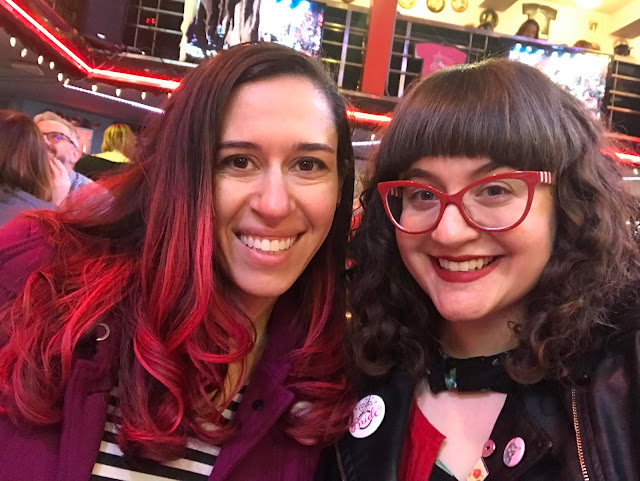 All in all, it was an amazing weekend and I could not thank my two sisters, Red, and Jen enough for all their planning and support. I loved every minute of it (even though I did not feel my best Sunday  morning after all the champagne I had!) and wouldn't change a thing!