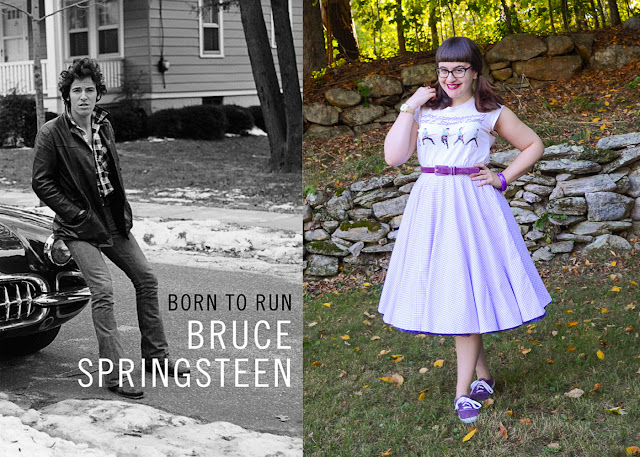 I have been SO PUMPED to share this edition of "What's Sara Reading?" you have NO clue! As many know (since I will gush about him to anyone who will listen), I am a HUGE Bruce Springsteen fan. I have been my whole life. Sometimes I think it's due to the fact that my mom attended one of his concerts when she was pregnant with me. Or maybe it was one of my sisters. Meh, the story changes every time! 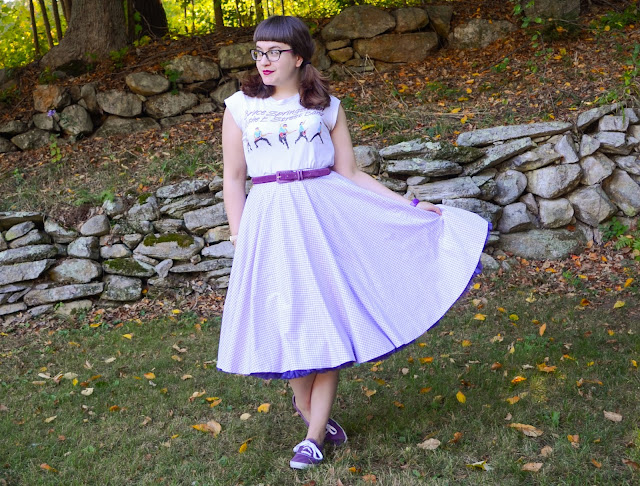 While I have seen Bruce only twice (don't even talk to me about the Springsteen Tickets Disaster of 2016 - I still suffer from PTSD from failing so hard), my father can't even count the times he has gotten to see the E Street Band. Yep, my entire family are Bruce maniacs. He is one of our family favorites. Okay, we have a few. But he's always kind of been top dog in our household. 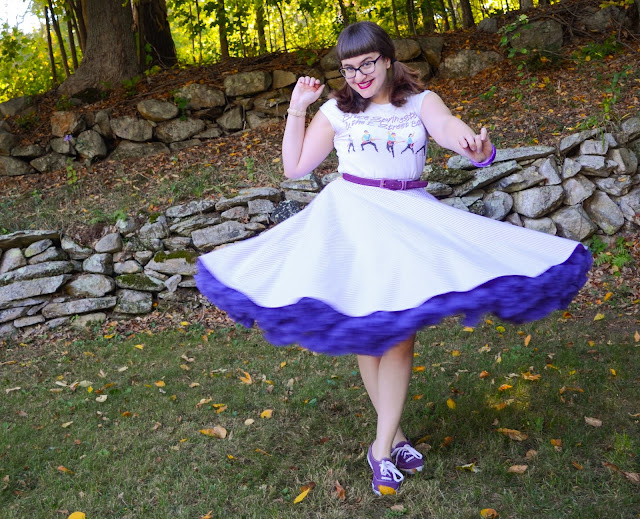 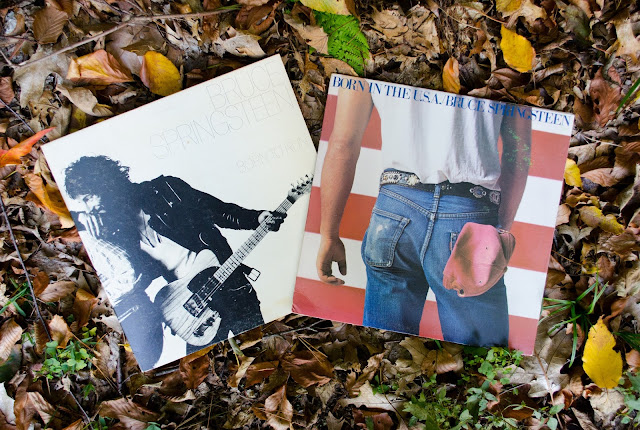 With my heart still aching from not getting tickets to see him this year (and he came 'round my area TWICE!), I heard about his autobiography and kind of lost my shit. YESSSSSSSS! I immediately pre-ordered it and waited. 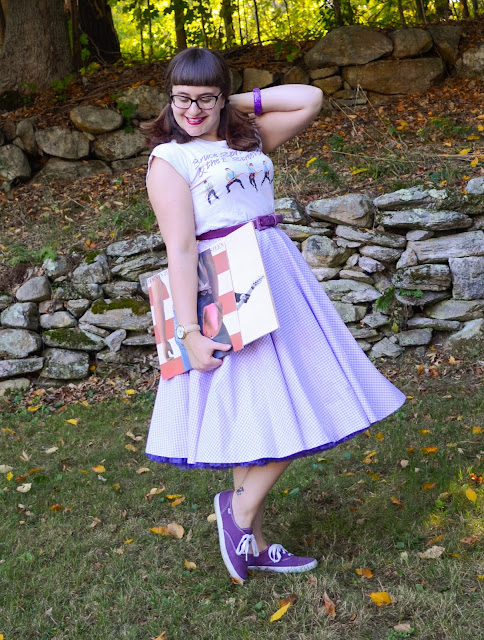 While "Born to Run" and "Born in the USA" are two of my favorites, these are just a fraction of my record collection!

It finally came out in late September and I may have sped-read what I was reading at the time so I could get through it as fast as I could so I could finally get to Bruce. 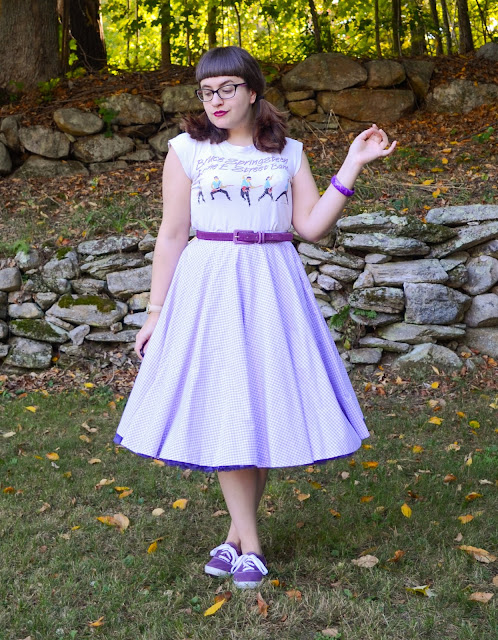 I am STILL reading it, to be honest (this sucker is looooong!), but I wanted to post about it with this awesome Springsteen themed outfit. Now, I have many Bruce tee shirts, two of which originally belonged to my parents. One that belonged to my mother that features his signature (and beautiful) behind against the American flag backdrop from the Born in the USA album cover (you can see that album in this very post!). I was going to wear that for this post but it's literally falling apart with every wear so I generally just keep it in my drawer and wear it sparingly. 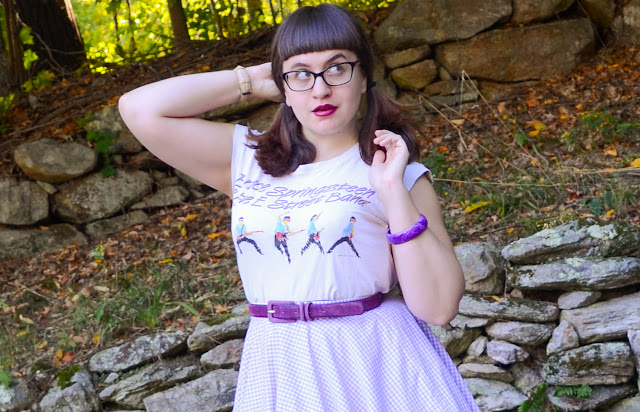 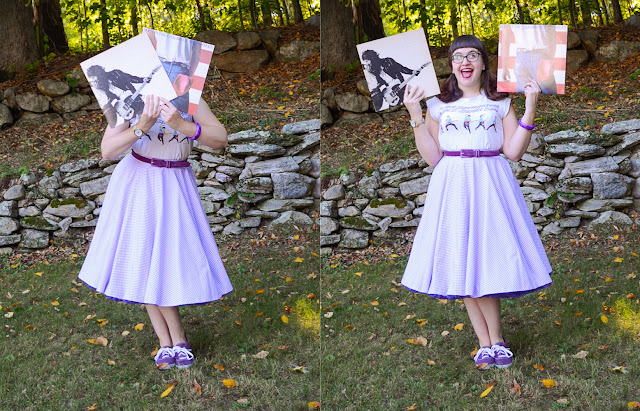 The second, the very one I am rocking here with my Julie Mollo retroversible gingham skirt, used to be my father's and I have always loved the purple font and the way the little Bruce's dance across the front. It's falling apart probably just as much as my mother's but the purple details of this one matched so well with my Keds and Julie Mollo, it was meant to be. 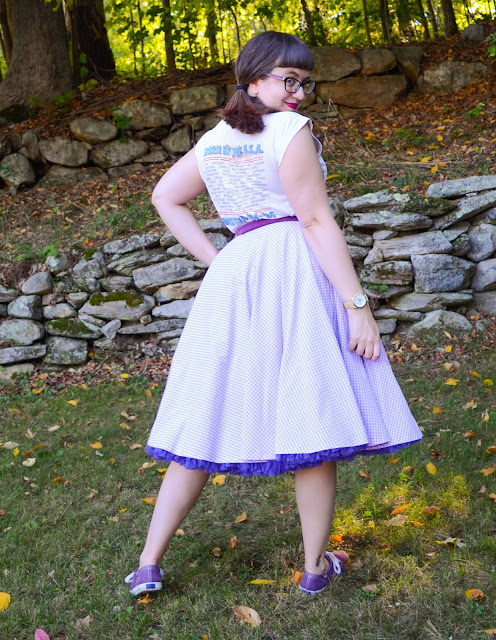 As you can gather, my father was a little guy back in his 20's! He still is (despite his dad belly from his nightly bowl of ice cream) and is only an inch or two taller than me these days! 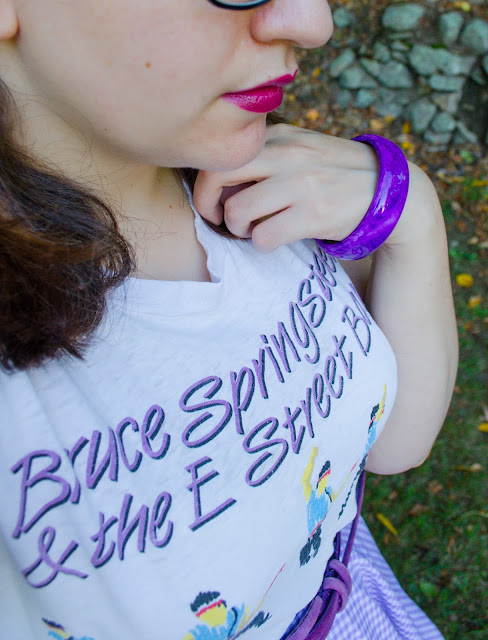 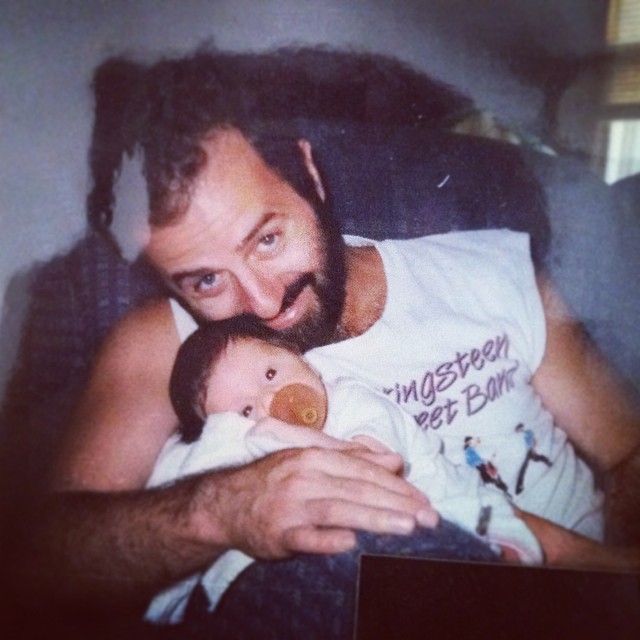 In fact, here is a shot of my dad in this shirt with little baby me circa 1988 - look at the size of pacifiers back then!

But back to the book! 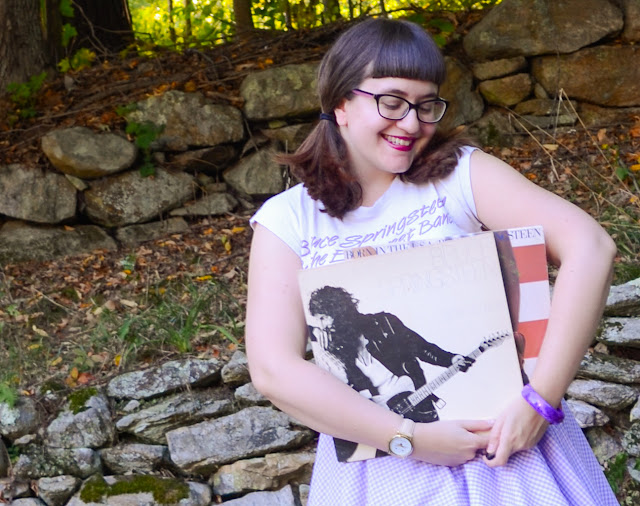 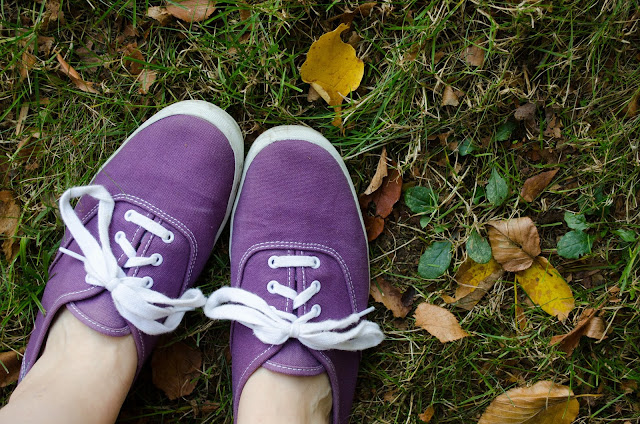 Bruce's autobiography is exactly what I hoped it would be and I especially loved the first section about his life growing up. I loved hearing about his first guitar experience after seeing Elvis on TV for the first time. He totally SUCKED! He hated lessons and quit taking them, didn't know how to play but pretended to, and his first "concert" was on their back patio for the neighborhood kids, where he just essentially banged about on the instrument and sang nonsense. 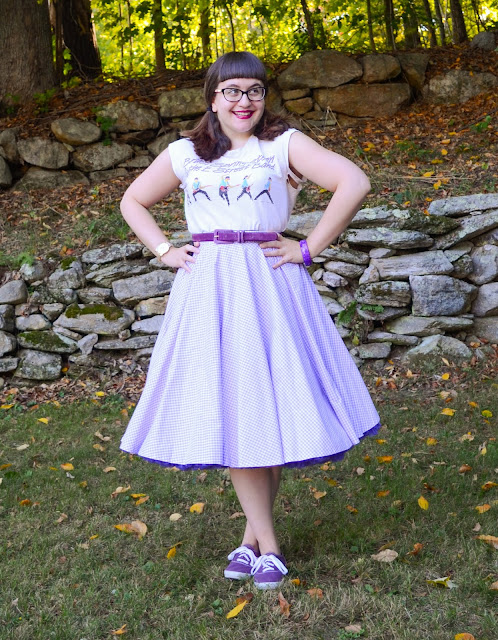 It was also heartbreaking to hear about the struggles his family endured when he was young - from his homes that didn't have heat or hot water to how terrible he was treated at Catholic school, though it was not surprising since the Catholic schools were known to be strict and cruel back in the 50's.  It was also sad to hear about his strong bond with his grandmother and how torn apart he was when she passed away. 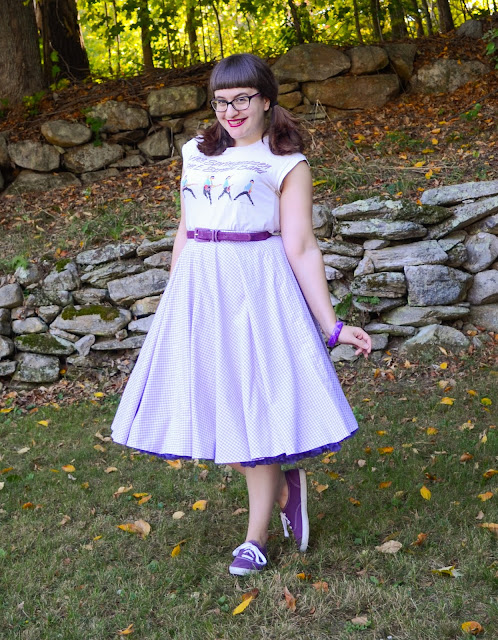 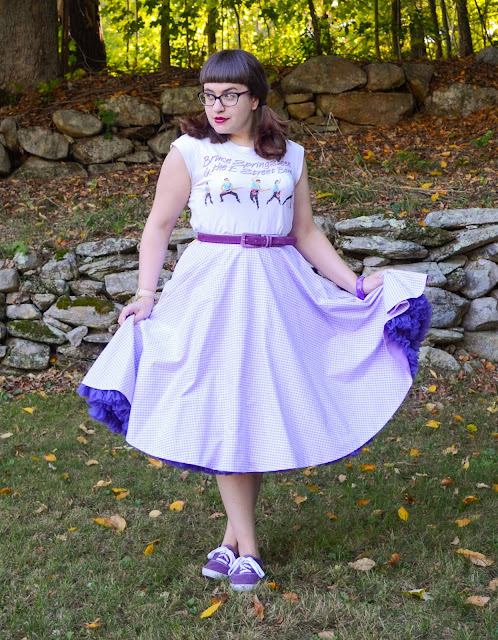 I laughed when I read about the various bands he was in as a teenager - especially those that he got kicked out of. I wonder what those guys thought when Bruce hit it "big" and they had to swallow the reality that they kicked The Boss out of their band. HA! Such karma... 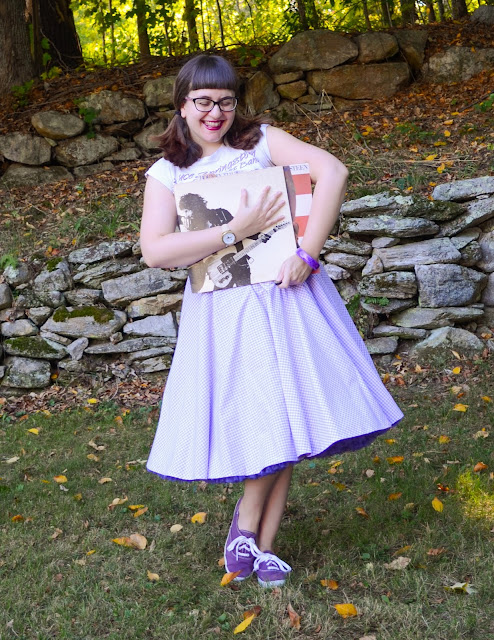 It was also really interesting to read about his climb to fame in a time where social media, the internet, and MTV didn't exist. It was so different back then! It was a HUGE deal that he was asked to be on the cover of the Times and Newsweek simultaneously and  so quickly. He shares his mixed feelings about agreeing to being featured as well as how infuriating it made him to arrive in the UK and see the posters already proclaiming him as "the next big thing." He didn't want anyone telling his fans he was the next best thing, he wanted to show them that all on his own when he got on the stage - a very interesting and unique perspective considering today's celebrity world, if you ask me! 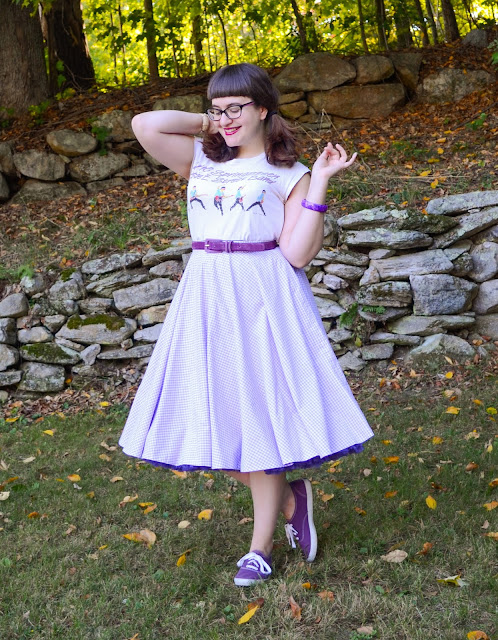 There's something special about getting an inside look into the life of someone you admire. Usually I avoid biographies or autobiographies in fear they will be boring - I like fictional stories that move right along - but I kinda knew an autobiography written by The Boss would be nothing but kickass and I enjoyed every word of it!