What's a Girl to Do When She Just Can't Choose? Collectif Jasmine Floral Swing Skirts from Modern Millie! 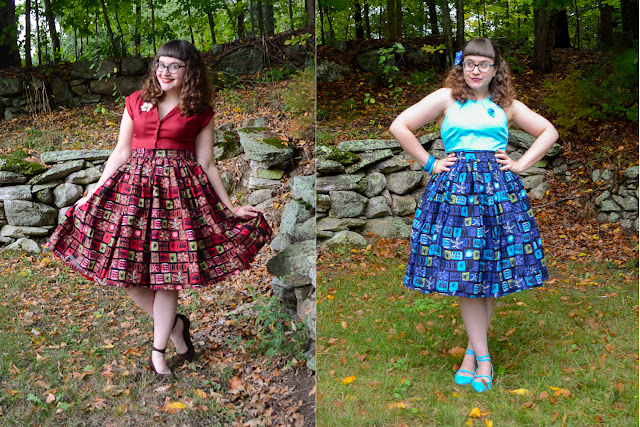 Last weekend, before Salem, Ma got too taken over with Halloween festivities (seriously - once October starts, it's fun but crazy in that neck of the woods!), I met up with Jen from Dressing with Class so we could shop til we dropped at Modern Millie. 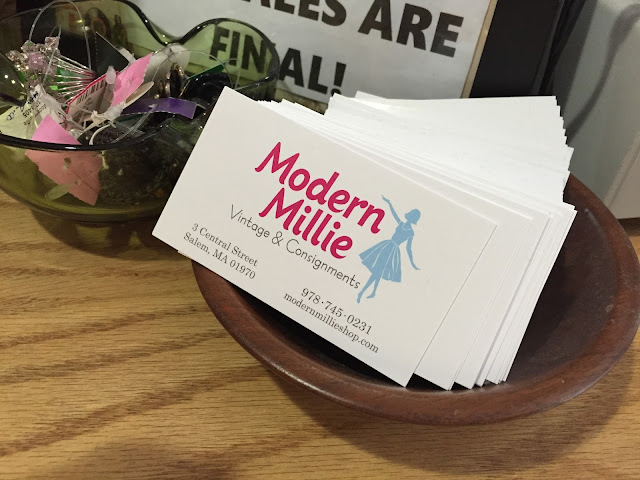 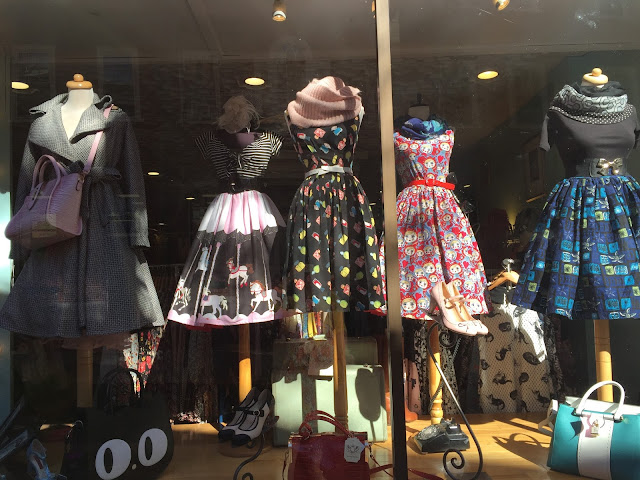 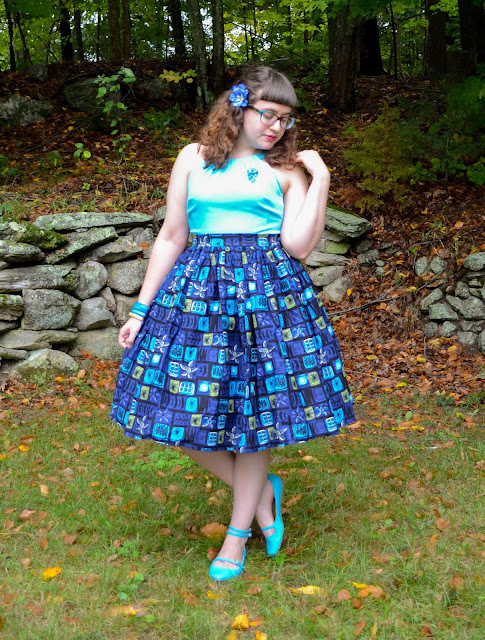 I have shopped with Modern Millie before virtually (they have an online shop but also will sell things via Instagram) but never have been able to go in person. Seeing as it is located in the very state I live in, you'd think I would be there every weekend! It's actually over an hour away from where I live and it can be difficult to get to with all the traffic in the area. 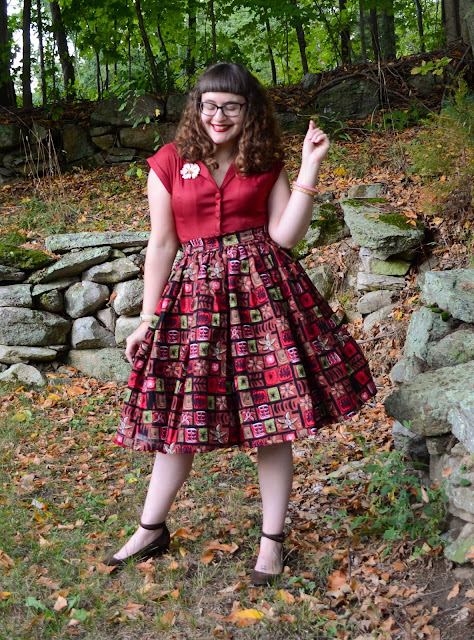 Visiting has been on my bucket list for awhile now so when Jen suggested we go before October started, I was totally on board! Luckily, Jen is only 40 minutes or so from the shop so Cody and I headed to Jen and Dave's and then we carried on to Salem as a foursome from there. 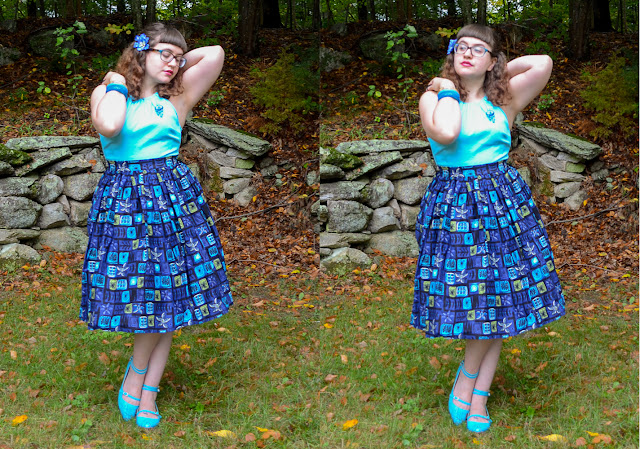 Side note - this Harley top is SO hard to photograph! Not sure why, but it's always blown out when it's photographed!

While Jen and I shopped (and boy, did we!), Cody and Dave headed down the street to the Bit Bar, a bar full of retro video games you can play for just a quarter each while having a beer or a cocktail. It was the perfect setup as I can only assume the guys would have been bored to death shopping with us! 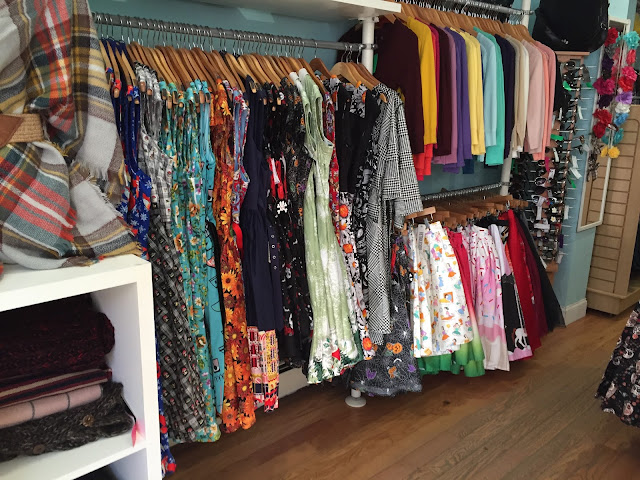 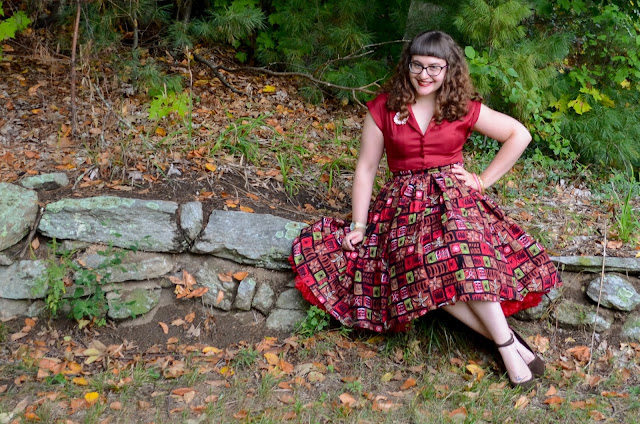 Jen and I took our time taking in all the options in the shop. Modern Millie may be a small shop but don't let the square footage fool you - this shop has SO many goodies! With items from brands such as Collectif, Hearts & Roses, LindyBop, Banned, Hell Bunny, BAIT Footwear, and more, there's plenty to go around! 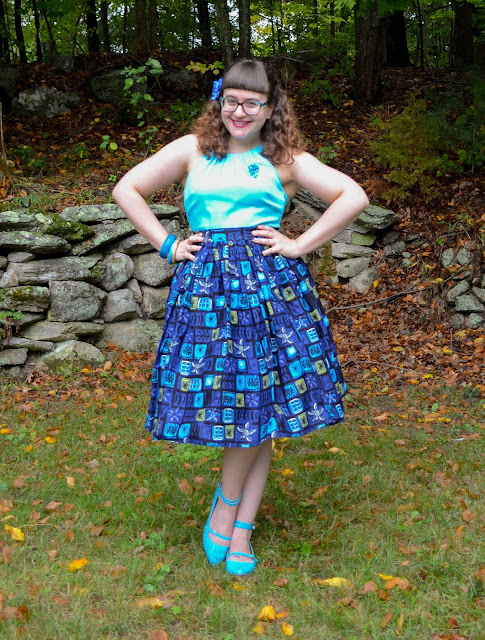 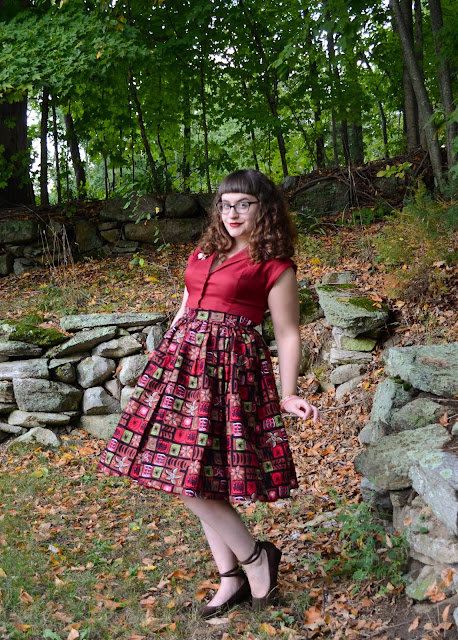 While there, we made friends with the gals on duty and they were nothing but amazing, adding items to fitting rooms for us as we continued to add things to our "try on" pile. I love when sales gals are attentive like that! 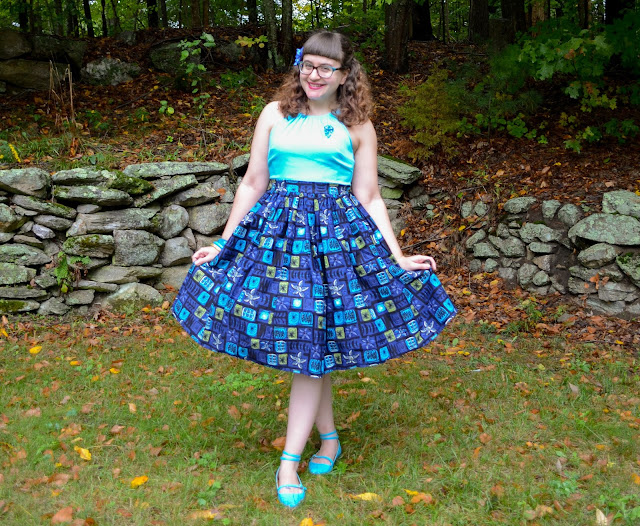 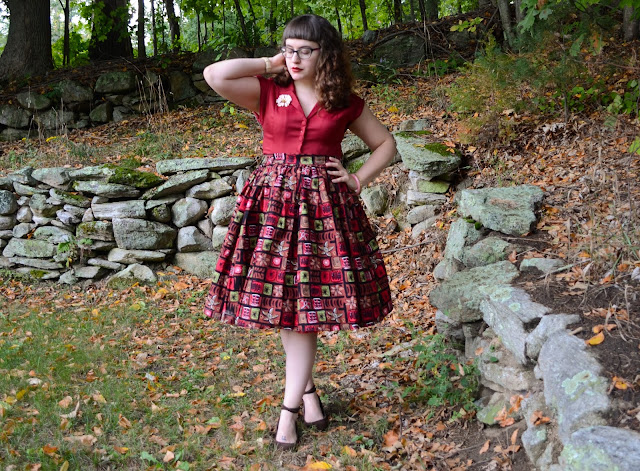 Jen and I both lucked out and scored some great stuff! I am sure Jen will post all about her finds soon (including a beautiful Emily & Finn dress that really could have been made for her) but as for me, I walked away with a new Mak cardi (always good to stock up on those!) along with the two skirts you see here! 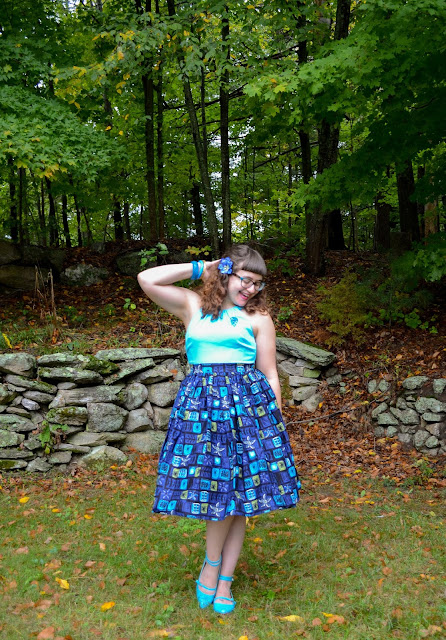 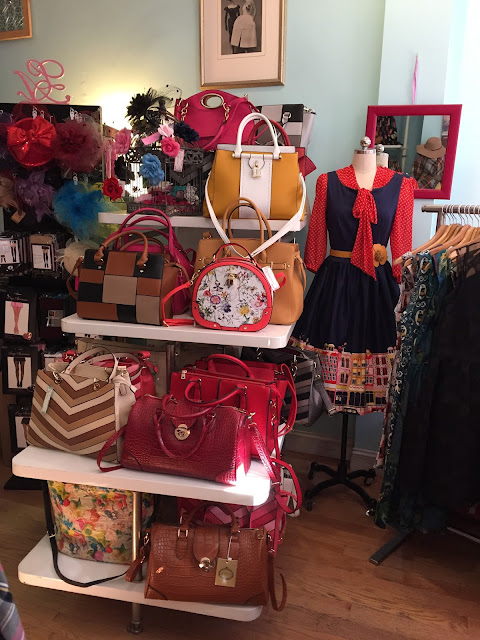 I did the thing ever gal wishes she could do - I couldn't decide between the blue and brown version of this adorably comfortable Collectif skirts so I just got both! Sure they're the same pattern but they feel SO different. One is warm, the other is cold! I wanted to add more blue to my wardrobe but am always so drawn to red hues. 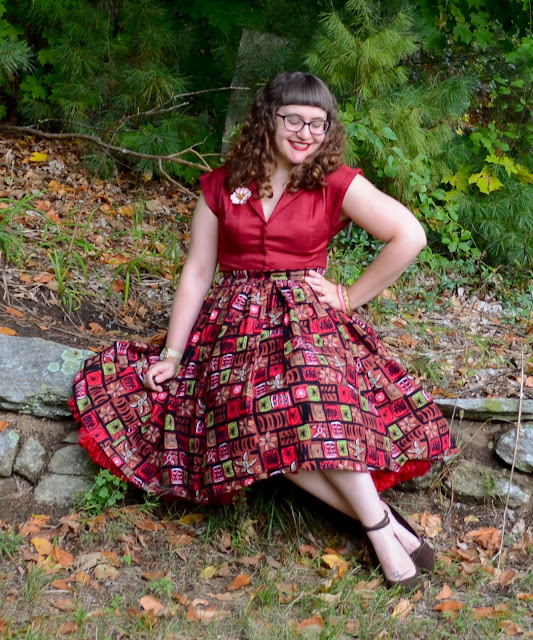 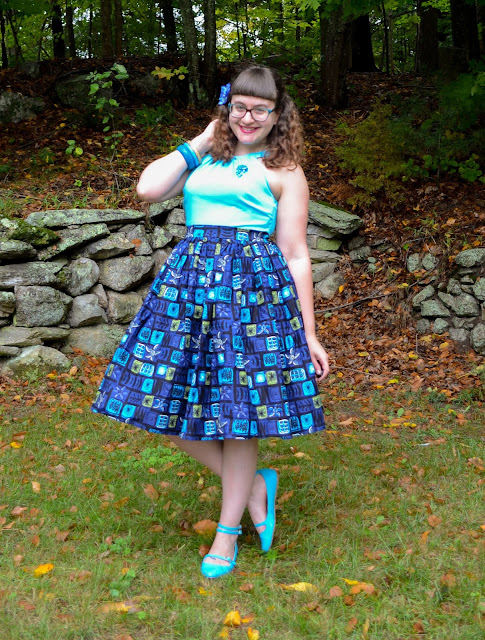 I got this red Banned blouse at Modern Millie as well. I already own it in blue and pink. They're great blouses so I knew I had to take advantage and snag a new hue while at Modern Millie. They have them in ivory and black as well for a great price! 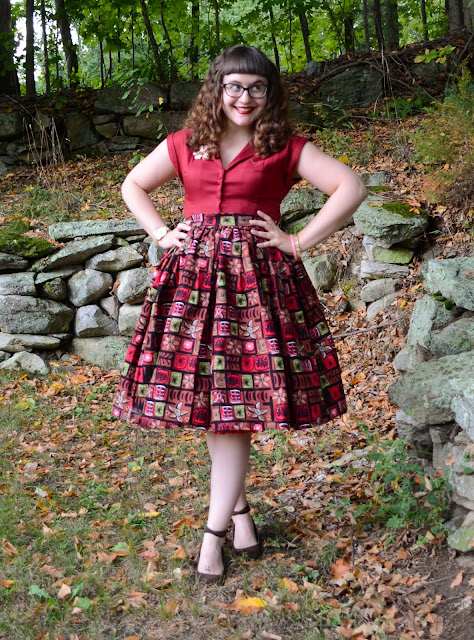 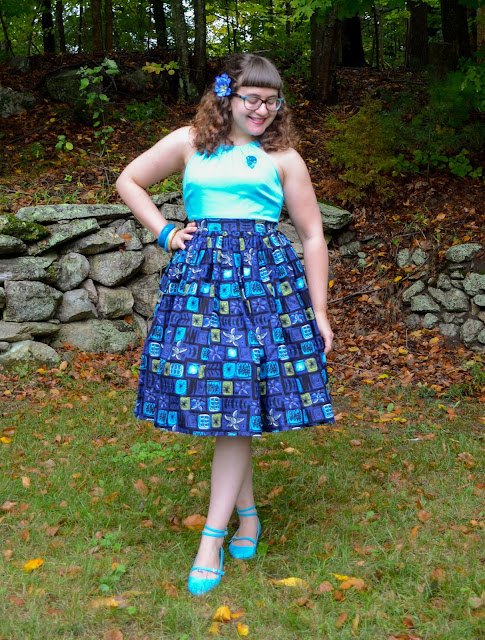 I knew my blue version of the oh so reliable Harley top by Pinup Girl Clothing would be the perfect match for the blue skirt but I can also see myself wearing a couple of dark blue cardigans I have once it gets cold out. Luckily, both of these skirts are very versatile. 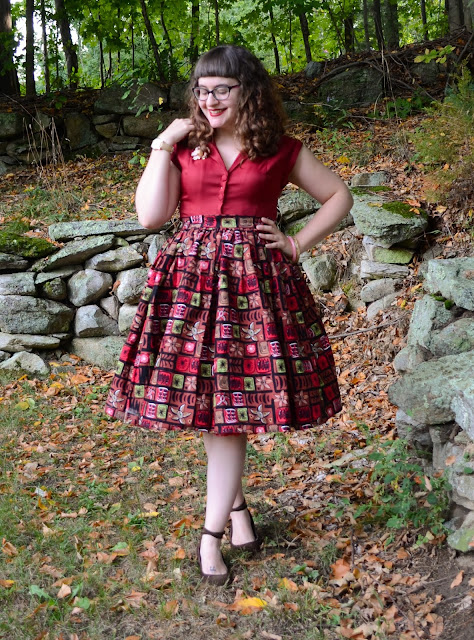 The skirts also run big! It's because of this that I love getting to shop in person. If I had ordered these off the Collectif website, I would have ordered my usual UK12 (which usually falls as a medium or large) but because I was able to see them in person and try them on, I was able to discover I needed to size down to a small (which online would be a UK10 at least)! It's a good thing I was able to simply step out of the fitting room and pluck the small from the rack! In the small, I still have room, which is great for when I am going out and stuffing my face with sushi or nachos, as one does. For reference, my medium skirts measure at 28" but are 30" stretched. 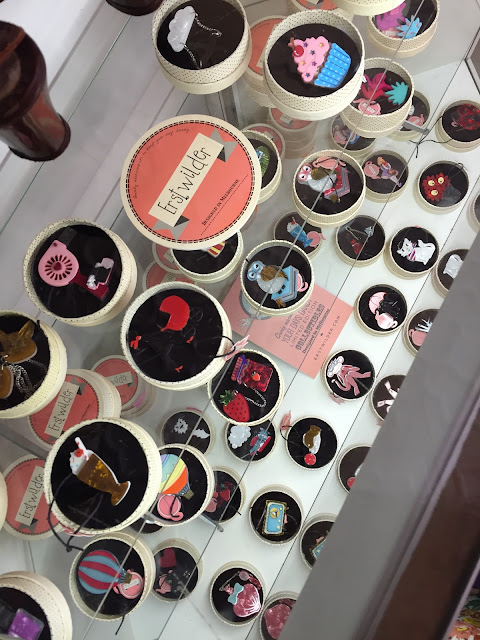 It was such a great day in Salem! After we shopped, the four of us checked out a monster wax museum, snapped some photos for Jen's blog among some creepy broomstick huts, and had burritos and tacos as big as our faces for dinner (with some seriously rich carne asada cheese fries as an appetizer - yum!). 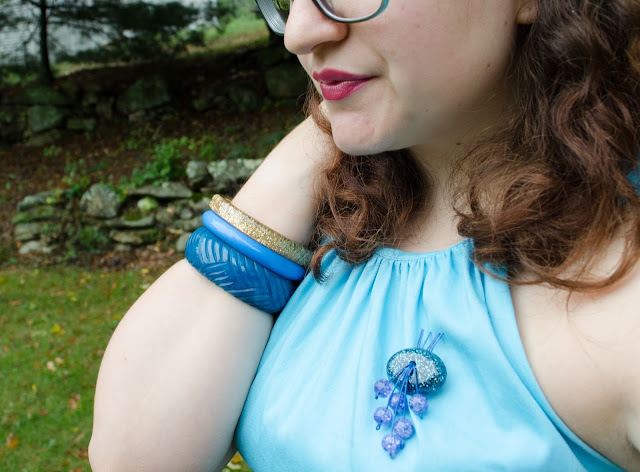 I think Cody and I have found a pair of really good friends in Jen and Dave and that's so exciting to me! It's kind of hard to make new friends as adults. When it just kind of happens on its own, it's almost like the excitement of dating someone new - OH MY GOSH, THEY LIKE US! SQUEEEE!

So, my little pumpkins, curious minds want to know - have you ever purchased two versions of a skirt/dress/top because you couldn't decide which to get? 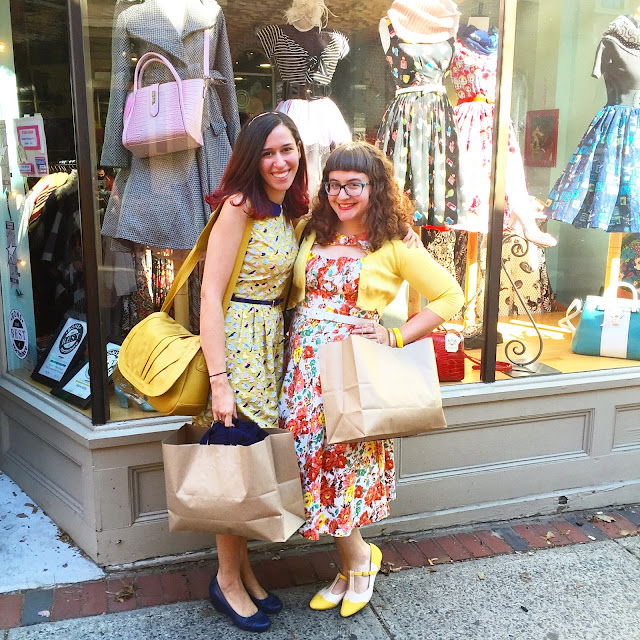