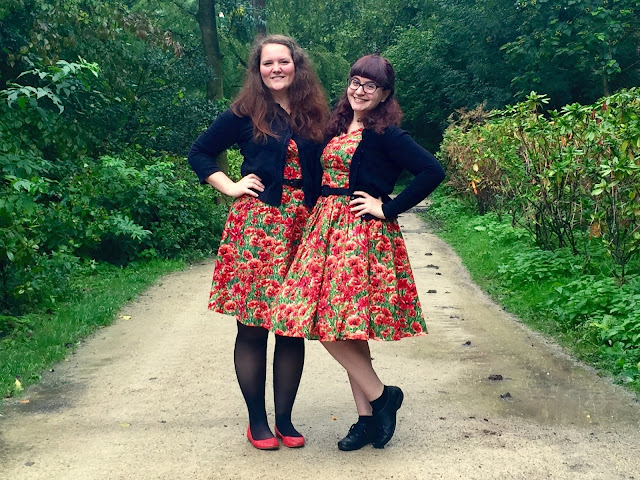 The most exciting part of my trip took place on my last day in Amsterdam. The show ended on the 15th and on the 16th, I got to meet someone very special - my close friend, Anna from Germany!! She arrived in Amsterdam with her sweetheart, Florian, and it was like we had known each other for years.

It's so funny meeting someone in person after only talking on the phone or Skype. We joked that there was a chance we'd meet and be totally weirded out by each other but deep down, I knew it'd be more likely that we'd meet and fall head over heels in best friend love.

But let's not get ahead of ourselves... 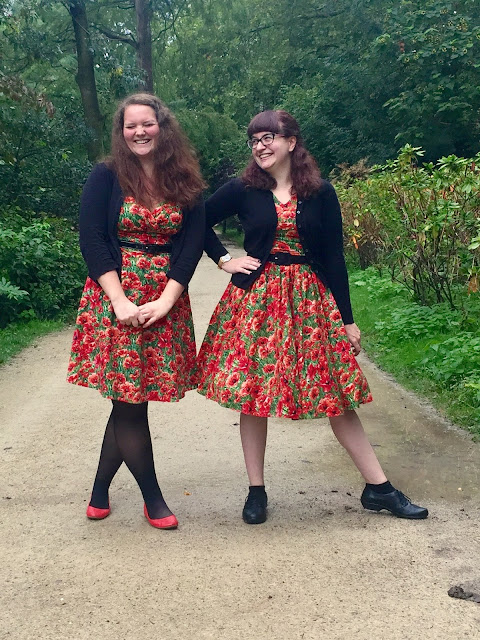 Anna lives in Bonn, Germany. We actually met on Instagram (see Anna's Instagram here) over a year ago and immediately clicked. Though I've never met this chickarita in person, she has grown to be one of my closest friends and we talk via Whatsapp nearly every day - we've even created our own hashtag: #bestdressfriends. We have both admitted that we get overly excited when we receive a voice message from each other - it's like we're dating. Yeah...we're a bit quirky. 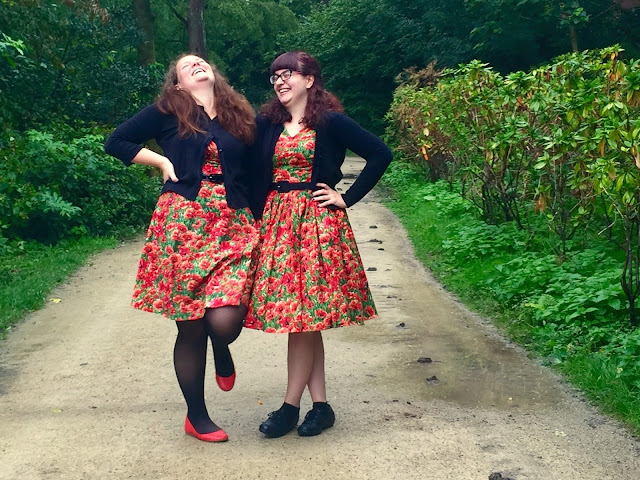 In so many of these pictures, I've got some major double chin but I don't even care - I love the silly-ness too much!

We have the same appreciation for Bernie Dexter dresses, vintage furniture, baking yummy things on the weekend, and kitschy decorations and it sure feels like we're the same soul living in different bodies sometimes. Is that weird? I have my sisters and my best friends here that I love dearly but it's so rare to meet someone that dresses the same as I do, loves the same style as I do, and has eerily similar opinions and morals as I do. It's like finding a long lost sister - in another country. 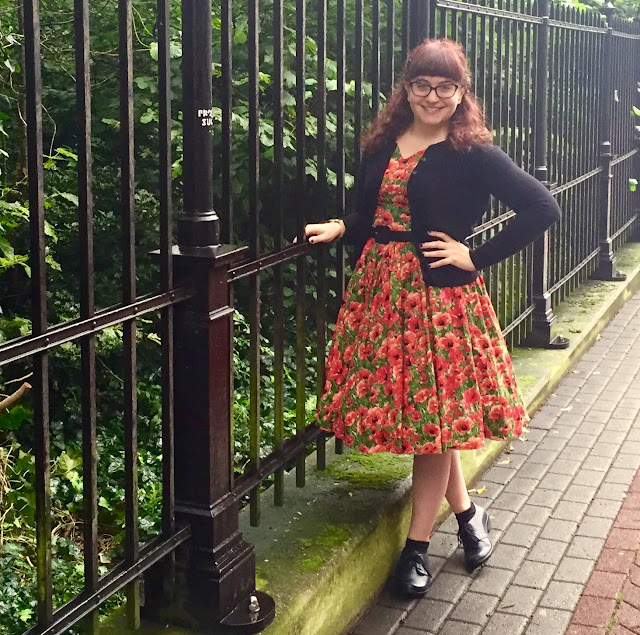 Anyway, I knew that the moment I had a show in Europe, a meeting would have to be planned. If for nothing else, we had to snap some pics for this blog post, right? 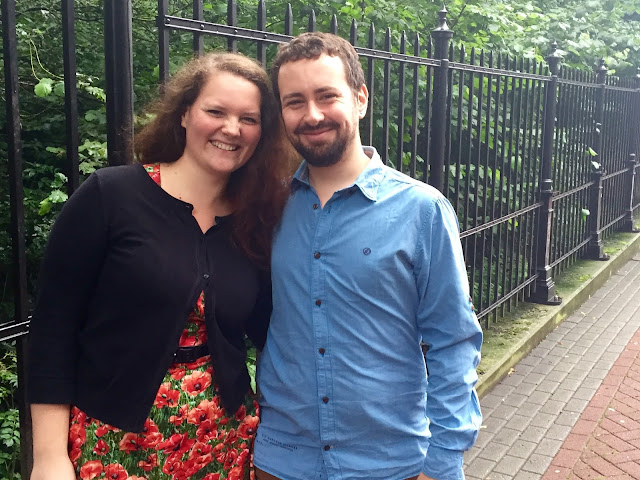 So we did it! Anna and Florian would arrive on my last day in Amsterdam for some exploring, picture taking, outfit coordinating, and vintage shopping. 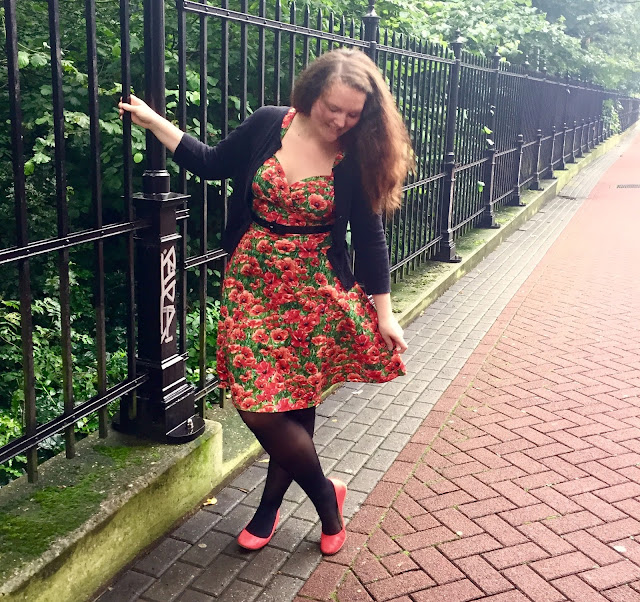 Upon their arrival, we found a pancake house and gorged on Dutch pancakes - they were amazingly tasty. I got apples and cinnamon and it tasted like eating an apple pie for brunch! Anna got a banana and walnut combo and Florian indulged in a chocolate coma inducing pancake. 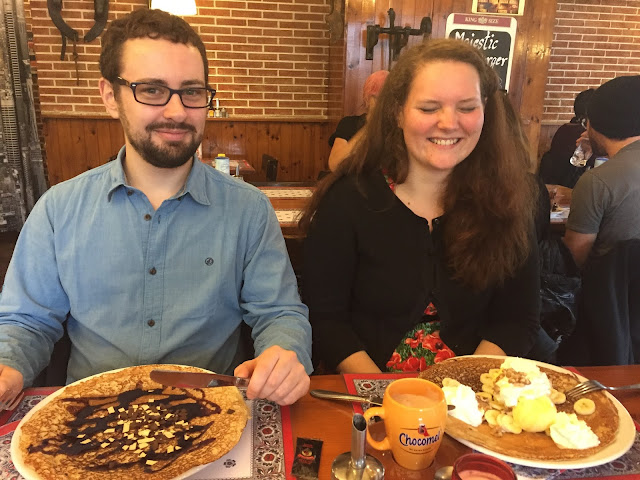 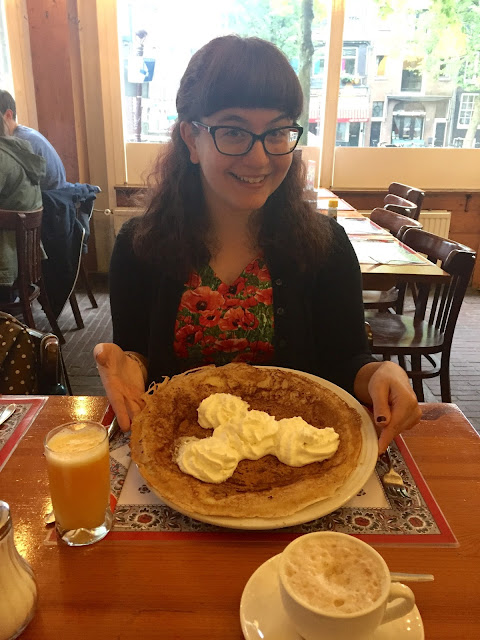 Once full, we changed into our matching Bernie Dexter Poppy Dresses - we have the same dress in two styles so we obviously had to coordinate outfits and snap some pics for this blog post. We did it at the right time as it started to rain shortly after and continued on and off for the rest of the day. 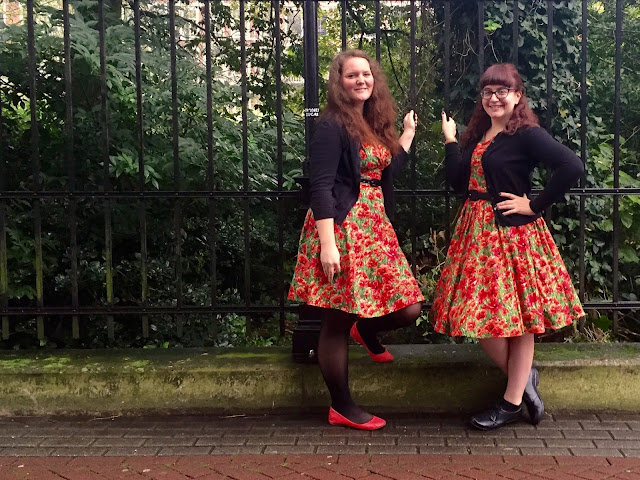 Once changed back into exploring clothes, the three of us walked our way into the busier parts of Amsterdam to visit the Sex Museum and hunt down as many vintage shops as we could. The museum was hilarious but also so very interesting and insightful. It was amazing how far back pornographic imagery goes - even before photography was around! It blew my mind. 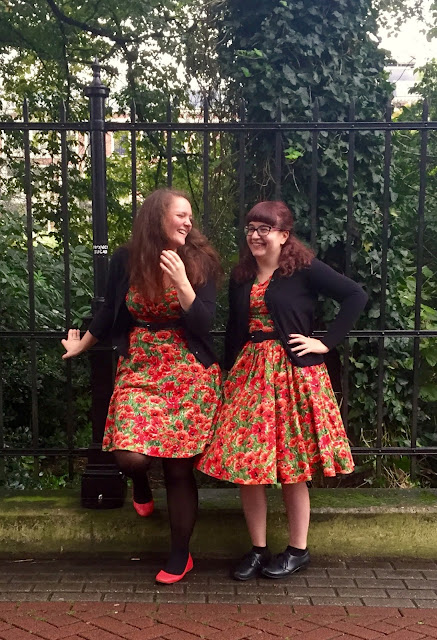 After we had our dose of scandal for the day, we found so many streets lined with stores - we managed to find 2 of the vintage shops on my list as well as 2 we stumbled upon! I managed to score an adorable vintage skirt along with a pretty linen robe and some souvenirs for my family back home. 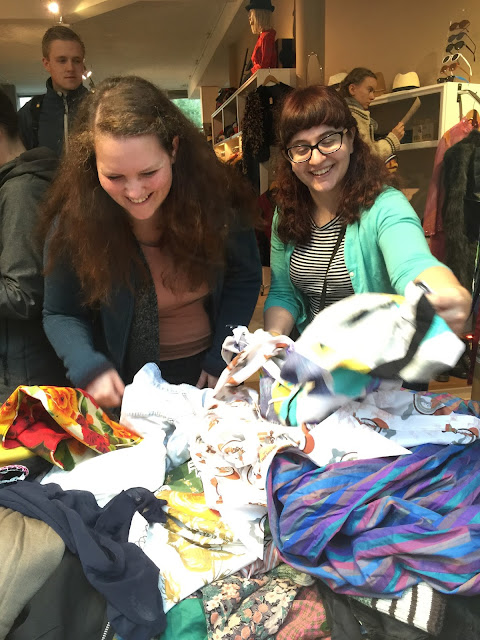 Thanks, Flo, for catching this adorable pic of us digging for gold in one of the vintage shops!

After spending the entire afternoon walking around, we headed back to my hotel and stopped for some dinner before Anna and Flo headed home for the night. By the time I was waving goodbye to their car, our feet were begging for a rest and we couldn't stop yawning. 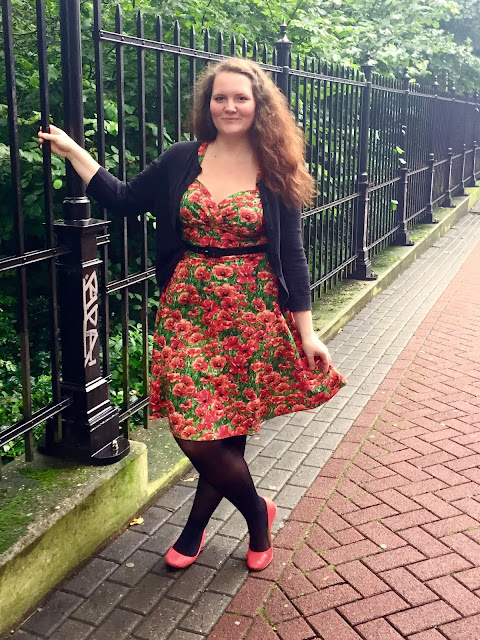 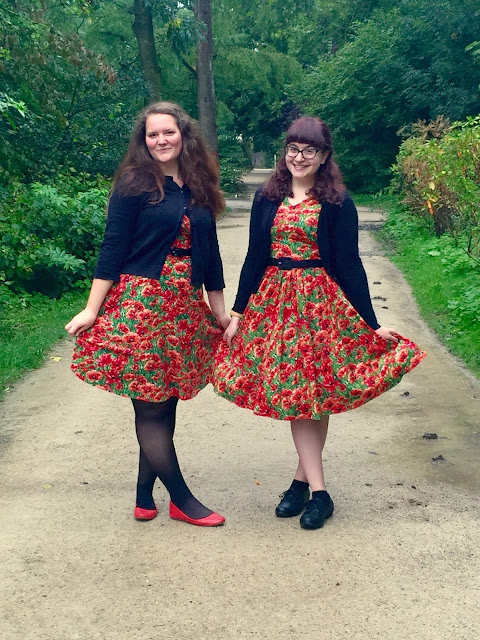 It was amazing getting to spend the day with Anna and Florian. While those initial moments when we spotted each other in the lobby were a bit out of this world (we both admitted to being extremely nervous as they got closer and closer to my hotel) and super exciting (I think we hugged for a minute straight - maybe two), once the exploring and picture taking started, it totally felt as though we hang out all the time and today was just another normal day together. I loved that! It was like we've known each other for years and years. 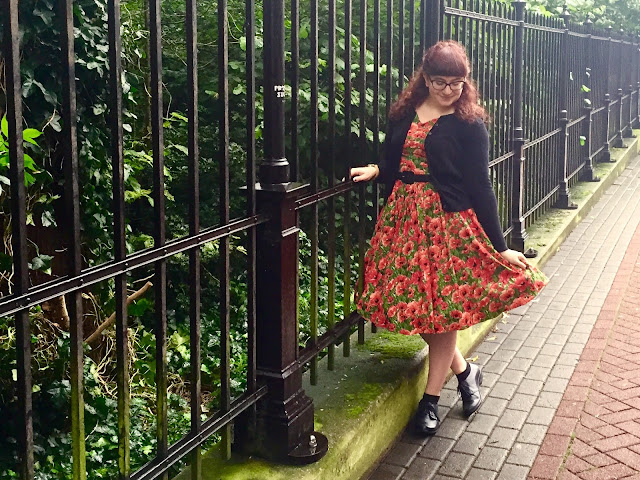 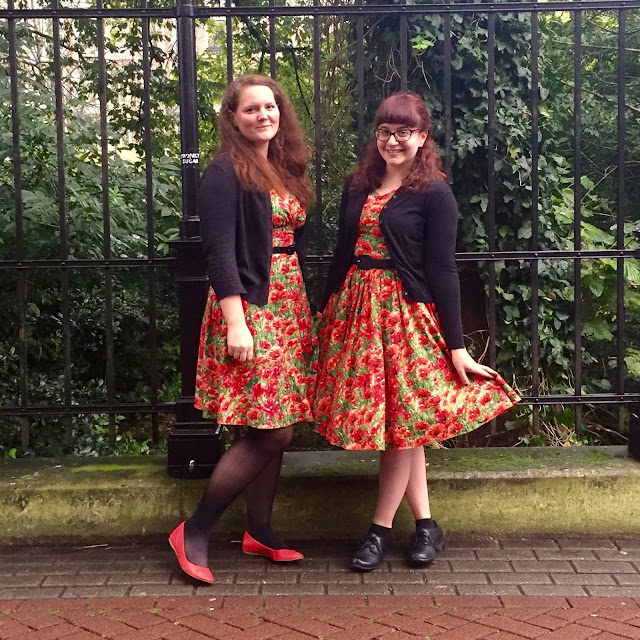 I can't wait for our next chance to see each other - perhaps next year when I am back in town for IBC 2016 or maybe there will be another chance to be in Europe before then. With my job, you just never know! 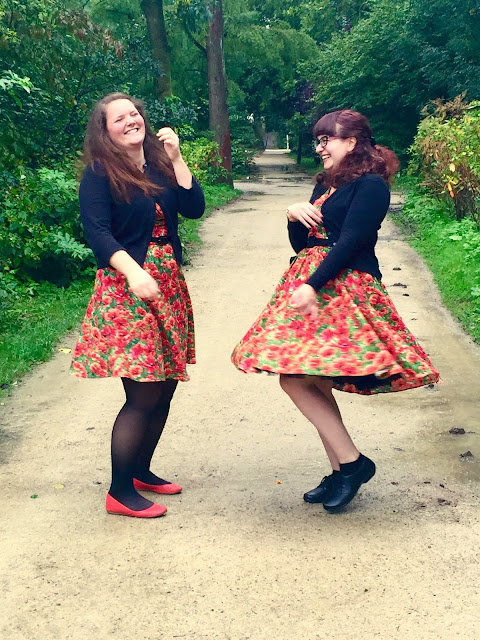 A hilarious twirling outtake seems like THE perfect way to end this blog... <3
Posted by SaraLily at 10:00 AM