Nope! You do NOT have to adjust your television screens. This is a book-inspired outfit post for MY OWN NOVEL! 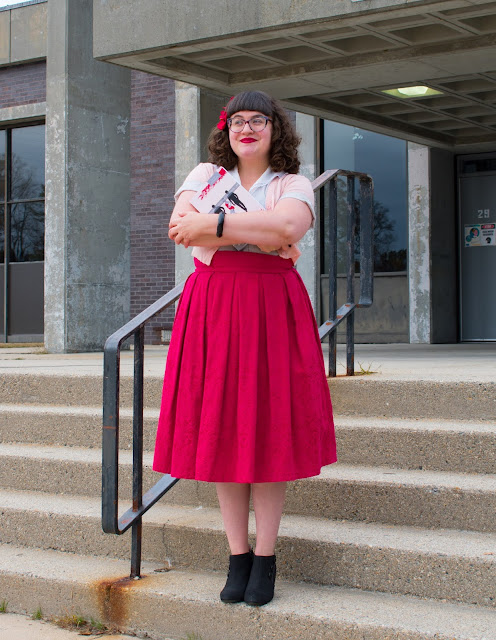 Yes, you heard that right! As many of you know from previous posts or on Instagram (by the way, I have a writing Instagram and Facebook page now so please go follow if you're interested in that!), I have been using my unexpected plethora of free time (thanks, unemployment!) to polish up my most recent novels to self-publish on Amazon. 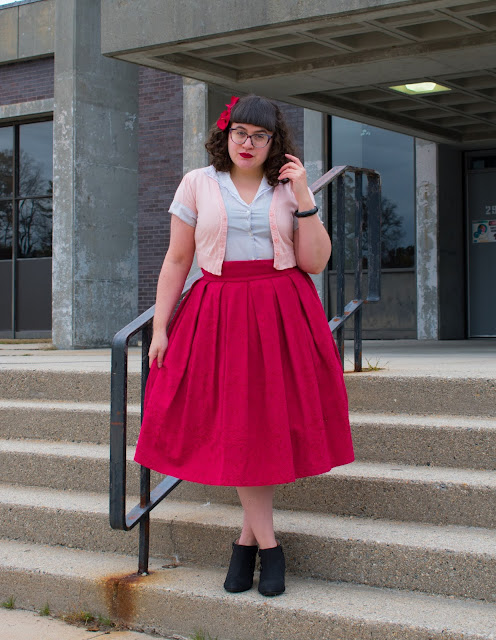 Well, I am SO SO SO proud to say that Pas de Deux is NOW AVAILABLE either for Kindle (or any eBook reader with the Kindle app installed) or paperback! To type out such a sentence blows my little mind. Sure, would it be SUPER nice to experience the traditional way of publication? With all the bells and whistles? Of course! But I tried that earlier this year for a few months and it just wasn't happening. Not to say it won't EVER but with tools like Amazon on my side, it is actually quite easy to self-publish and with a little pocket money put aside for marketing budget, I'm gonna see what I can do on my own. 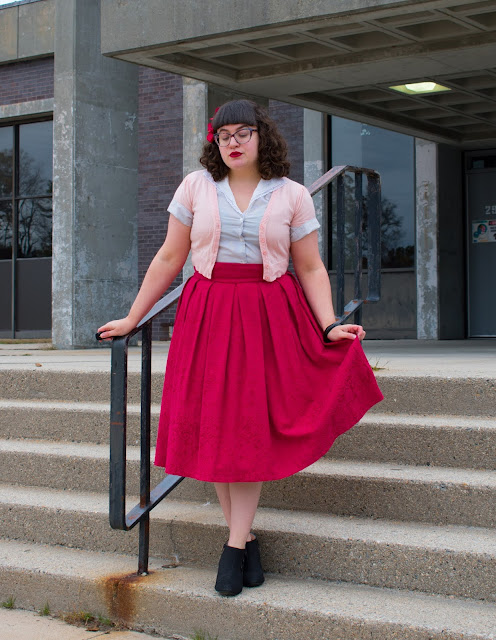 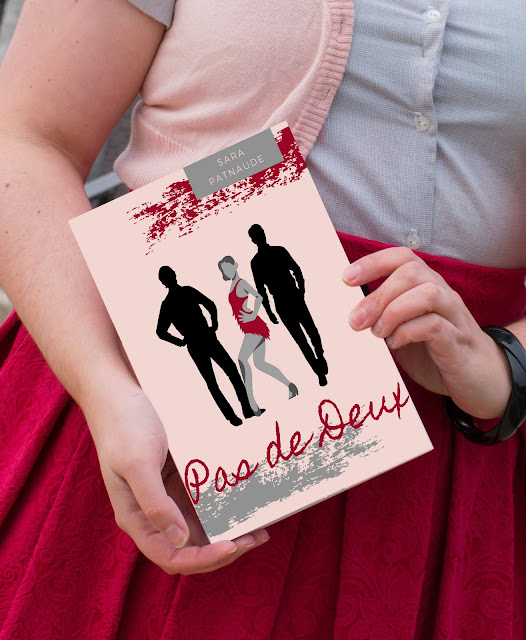 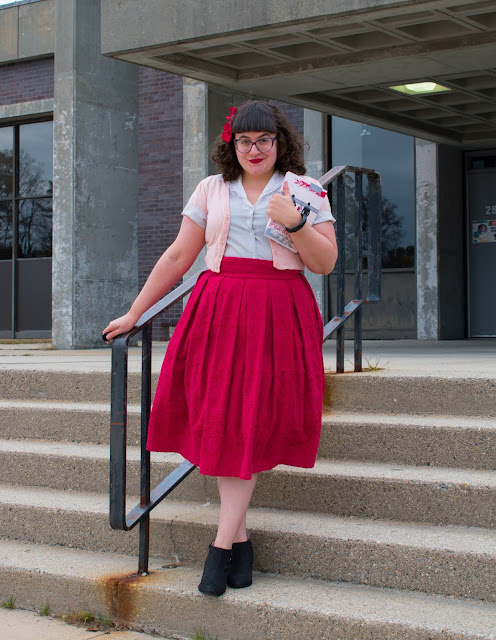 I'm definitely not expecting to be the next JK Rowling (though you could argue I have better morals!), but there didn't seem to be any reason NOT to give it a shot while I had the time on my hands. I hired an editor in September (shout out to Yasmin!) and worked closely with her in October to tune up my manuscript and get it ready to go. 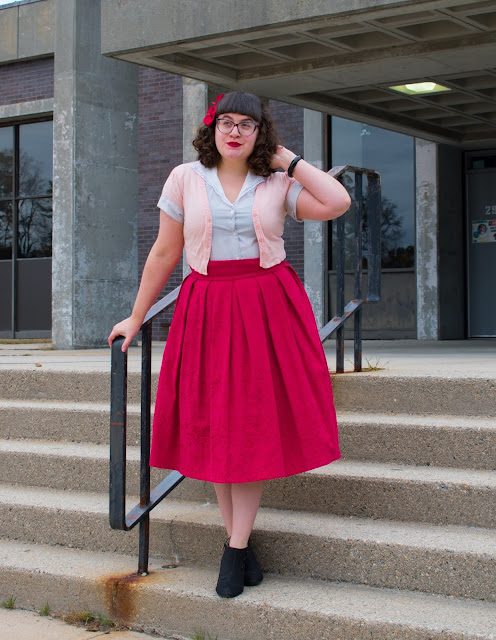 It can be tough to get edits back but she wrote them all in such a way that I didn't feel criticized, made fun of, or defensive. Her points were awesome and she really knows how to make suggestions without making the writer feel silly for not thinking of it sooner. I could not recommend her more! 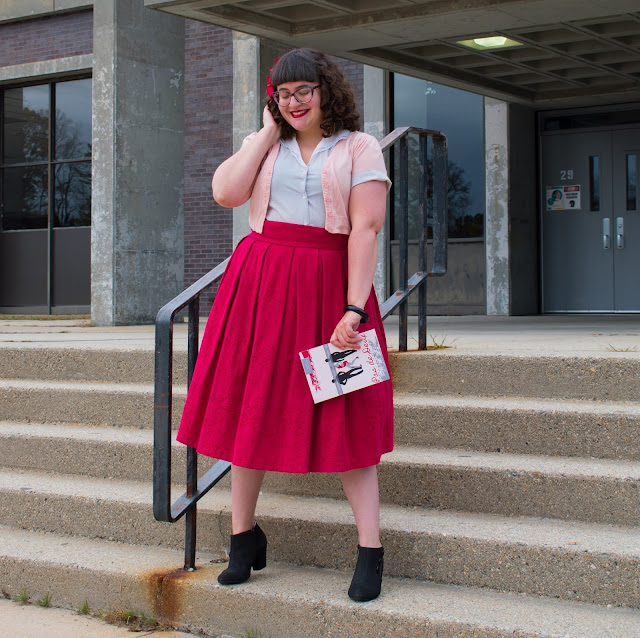 Don't mind the gray band across my book in these images - all I had to pose with was my proof copy!
I was too excited to share this post to wait for my final copy to arrive. Oh well!

It was surprisingly challenging styling this look. Figures that out of all my book posts, MY OWN BOOK would be the most difficult. Mainly because I wanted to incorporate as many of the colors I used on the cover as I could. That gave me peach, gray, red, and black. Red and black I could do but without the peach and gray, it felt lackluster. I don't have much peach and gray! I think I managed with this mix/matched look using a LindyBop dress as a skirt and my Bubbie's gray blouse. 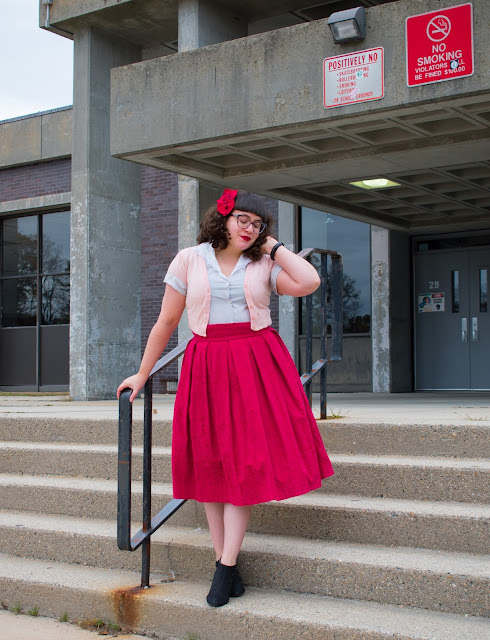 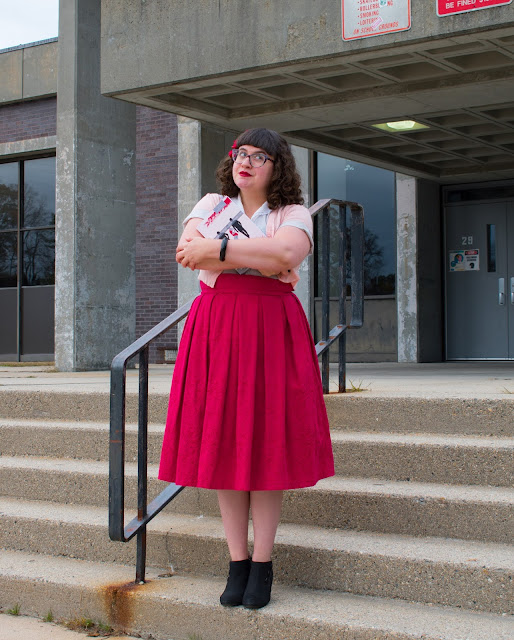 Who would like to hear more about Pas de Deux? Firstly, you might be wondering, what the heck does that title mean? No worries, I have a definition for you! And before you say anything, no, the book is not in French. It's just the title!

In classical ballet, the pas de deux (duet, or 'step of two') consists of four sections: an opening adagio in which the man supports the woman in turns and balances, followed by a solo variation for each of them, and concluded by a fast coda in which they again dance together.

I felt that the dance term pas de deux was the perfect metaphor for the story I was trying to tell and I hope my readers see the connection, too! I wanted a unique title that would help my novel stand out and definitely didn't want to end up with something trite and overdone. 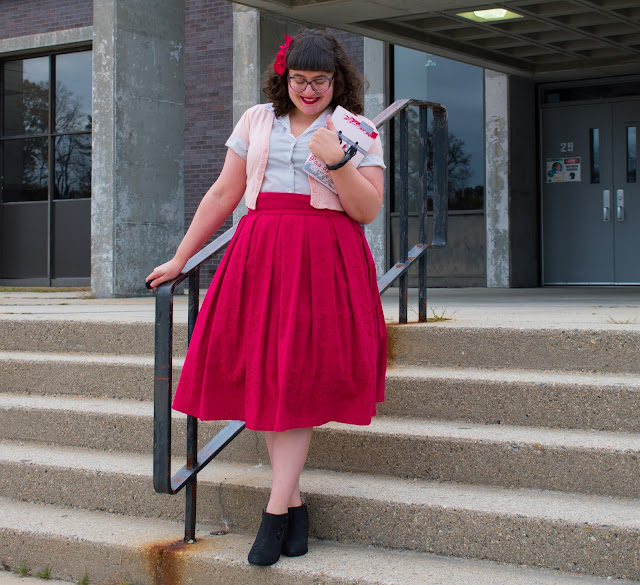 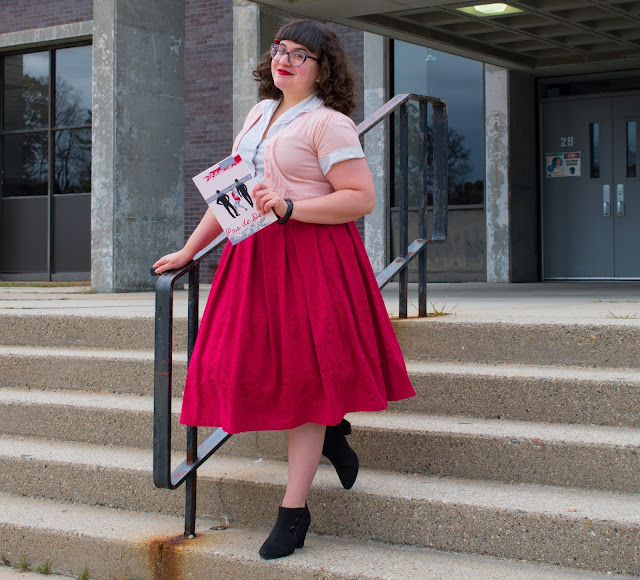 As for what the book is about? Here's the description:

When dancer Ruby Quade started a new life with the older (and very successful) Richard McCallister, she never anticipated falling in love with his son...but you don't often get to choose your dance partner in love.

After losing her family in a horrific car accident as a teen and navigating her way through the foster care system, Ruby met Richard while serving coffee to pay her way through college. A very successful businessman in his late forties, Richard’s life of travel and disposable income seemed like a fairy tale come to life for a girl coming from next to nothing.

Despite their wide age gap, Ruby was welcomed into Richard’s luxurious life and was given everything she could have ever wanted – a beautiful home, a walk-in closet, and her very own studio where she could teach aspiring dancers of all ages. She seemingly had it all, so why was she starting to feel like something critical was missing after all these years?

While very generous to Ruby, Richard has not been the perfect boyfriend. The more important he becomes at work, the less he is there for Ruby and the less he seems to care about anything other than appearances. Perhaps that growing void is why Ruby's friendship with Timothy, Richard’s twenty-seven-year-old son, has become something more somewhere along the way.

With the delicate boundary between friends and lovers definitely crossed, how long can Ruby keep up the facade before someone gets hurt? 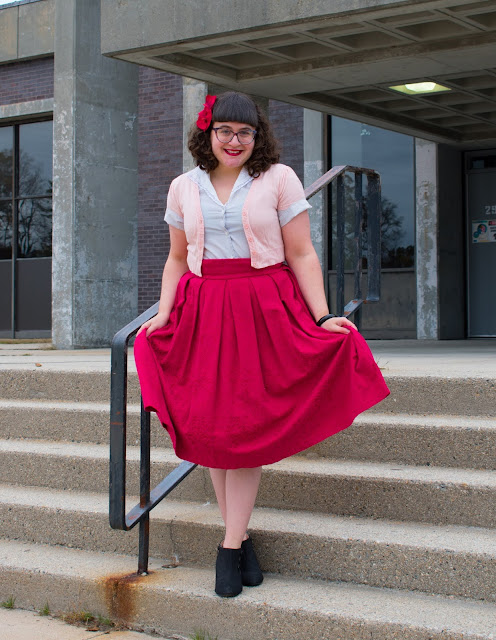 If any of the above sparks your interest, I'd be HONORED for you to give it a read. Check it out on Amazon to choose the format that suits you best! I hope if you do read, you take a moment to leave me a review as well. It helps authors SO much in a sea of millions of books to pick from. 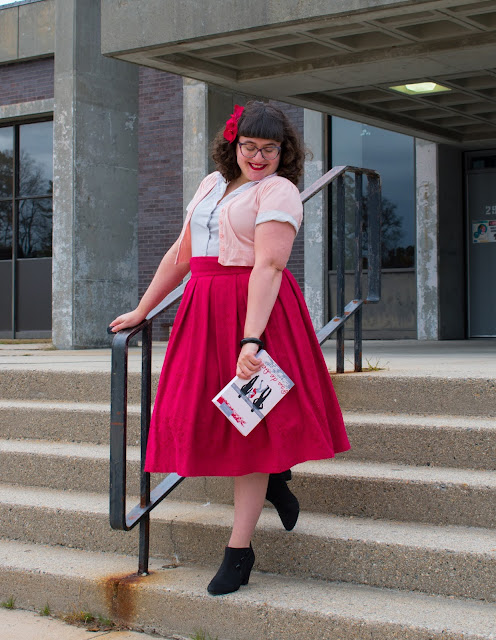