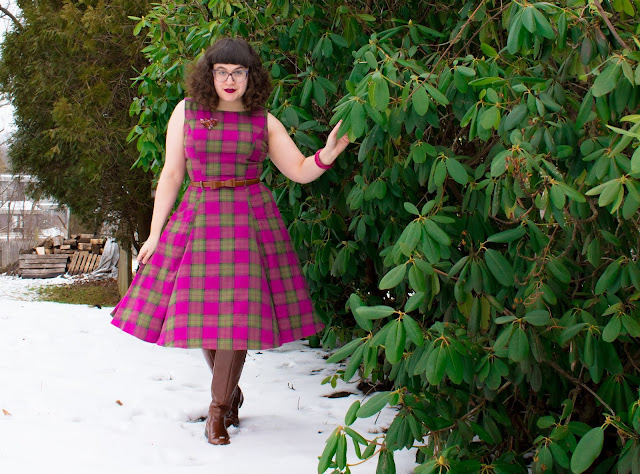 Happy Galentine's Day, my little peanuts! I am honoring Galentine's instead of Valentine's today because I want to have some girl talk. There is something I've been dying to share for ages now but had no idea where to share it. I know there are tons of others who would benefit from it though and feel the need to share my experience and decided Galentine's Day was the right time to do it. I wanna talk periods.

I know. What the heck does my period have to do with this adorable Sassy Check Swing Dress from Collectif? Well, nothing, it just became a cute Galentine's look.  I love getting some of Collectif's shorter styles because I know they'll be the perfect length on me. Sometimes their dresses can be a bit too long on me so when there are shorter lengths around, I pounce! With that said, are you ready for some back story? 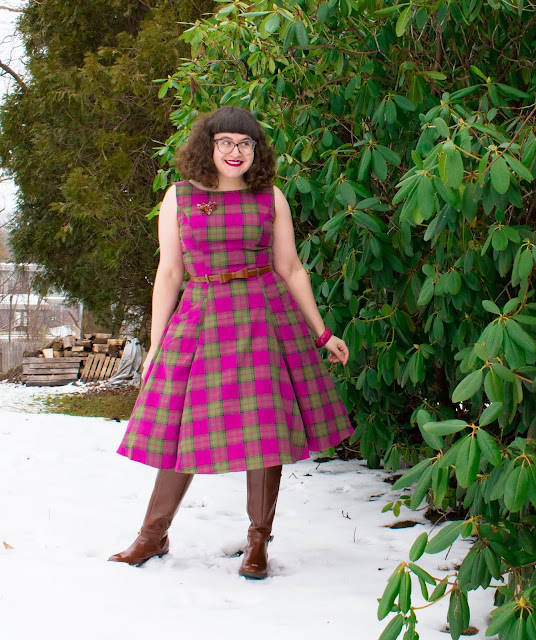 I have had brutally painful periods for as long as I can remember. Day 1 of my period usually consists of me getting my period and within the hour struggling to function as my cramps quickly increased in pain and got worse and worse as my flow got heavier and heavier until I'd start to cry and sometimes get close to faint (yep, almost passed out at work last Spring - that was weird!). Nothing really ever helped relieve me pain completely but I was always relied on as much ibuprofen as I could get down as fast as I could get it down and then get to a heating pad turned up as high as it would go ASAP. Then I'd curl up around it, rock back and forth, and just breathe and wait for the moment the heat would start to ease the cramps. Sometimes this would take hours. Most times after using the heating pad, I'd have slight burns on my belly. Not kidding.

This happened EVERY SINGLE PERIOD. While I was on birth control between years of 2006 (woo college!) and 2016ish, I did not experience this at all (my periods got incredibly light and it was easy breezy for about a decade while I took the pill) but about 3 years ago, I stopped taking the pill when I realized it was the reason I was getting chronic yeast infections (FYI - since stopping the pill, I have had maybe ONE infection in the years since, so you do that math) and my pain just hurdled back into my life as if it never left. 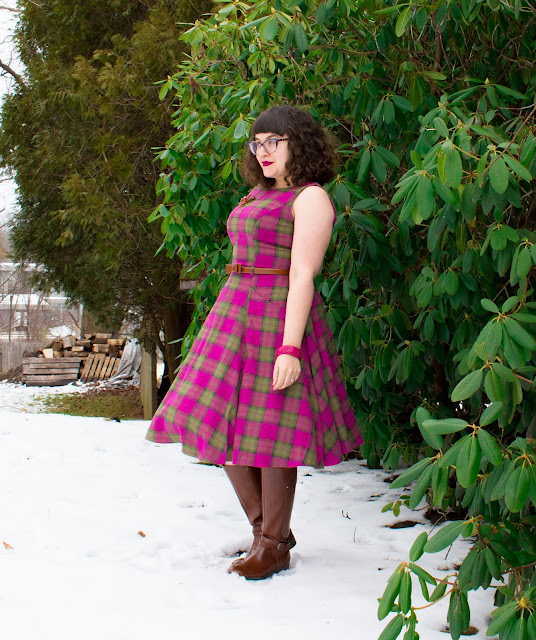 The last few years have been so particularly terrible, I had started to form an anxiety/fear over getting my period every month because of how painful that first day is. Despite what my mother told me, no, my period did NOT get better with age. It got WORSE. But my fear was there - will I be at work? Will I be on a train to NYC or a plane somewhere? Will I be at a location where I don't have access to a heating pad or can't leave right away to get to one (hello Thanksgiving of 2015 - I got it on the drive to a relative's house two hours from home and to be honest, I do not remember anything from that afternoon because the pain was so bad as I sat there with a forced smile on my face and just tried not to scream). I mean, come on. I shouldn't be SCARED of getting my period, but the pain was so bad, I was terrified to get it. 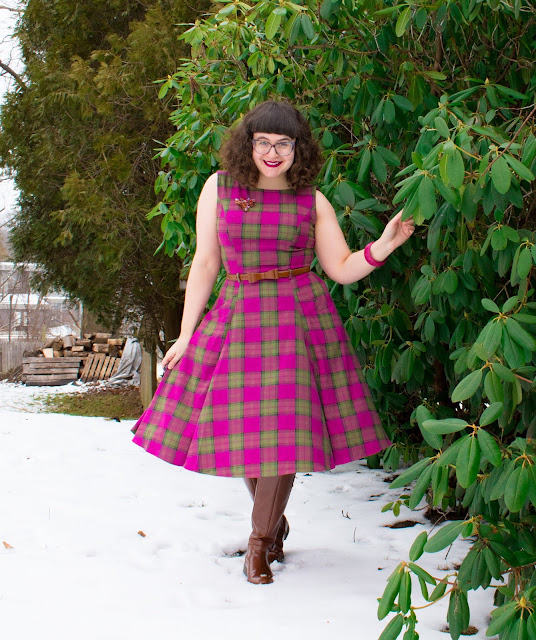 Because of all of the above, I started to keep a heating pad AT MY OFFICE so that I could plug it in and clutch it at my desk if I got my period at work (my boss would never make me stay at work but having to leave halfway through the day every month gets old). Listen, I've been dealing with this agony since high school - I've lost any shame around it and do not care if others see me with a heating pad on my abdomen.

Before anyone asks, I do not have endometriosis. My pain only existed on day one. Once I got through that day, the rest of my period was never fun, but it was manageable with regular ibuprofen. But because my pain was just "unlucky" and there has always been nothing "wrong" with me, I usually just got the pitiful look from doctors when I dared mention my discomfort and the cliche "I know, it's awful, some women just get the short end of the stick." 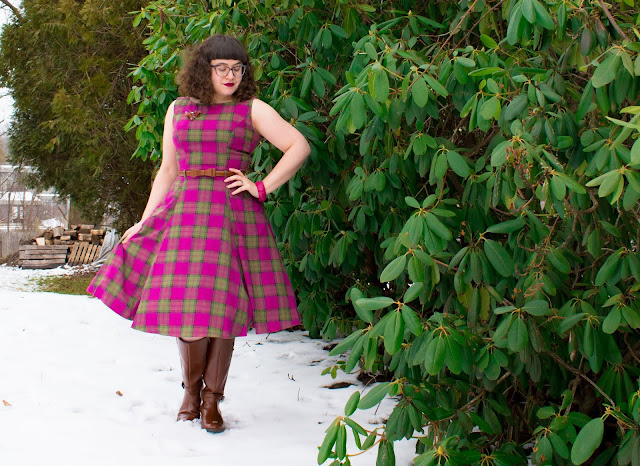 Uh...EXCUSE ME? That's all you've got for me? It IS all they ever had for me. The only solution doctors have when a patient complains of period pain is the birth control pill. Over and over again, my doctor would tell me I could go back on the pill and when I said that was out of the question (especially now when I really want to have a family soon), there would really be no other suggestions. I'm not kidding. It is extremely disheartening that in 2020, there are still no answers to helping a woman who suffers from this - suffers from ANY menstrual issues or problems/disorders involving our nether regions. It's just expected that we get through it. SORRY, WUT? 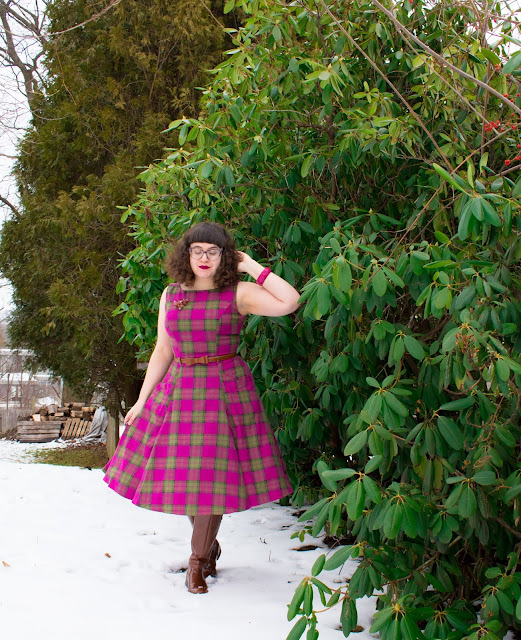 So why am I going on and on about this? Well, you may notice that the above is mostly written in past tense. Not counting my pregnancy last fall, my last 4 periods have been nearly pain free and I feel like PEOPLE HAVE GO TO KNOW ABOUT THIS. And no, this is not a sponsored post or some scam. I wish someone had told me this YEARS AGO and it pisses me off that no one ever did and that doctors don't ever talk about menstrual products with their patients - ever notice that? WHY DON'T THEY? 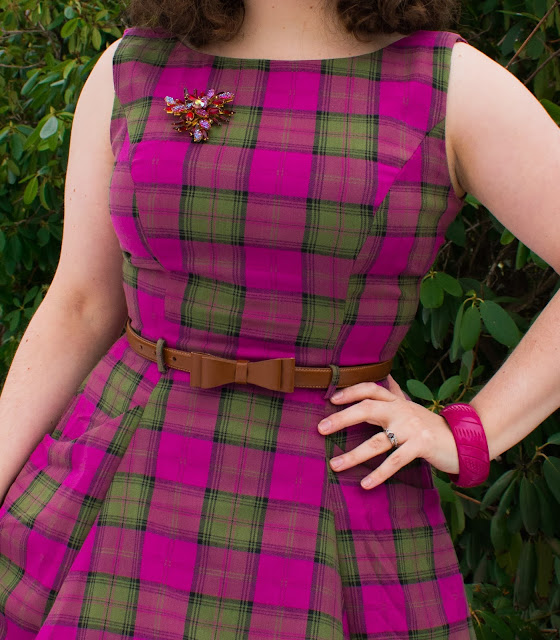 Last spring, I started to hear other women say that when they stopped using tampons, it made a world of difference in their cycles. I immediately didn't believe them because HOW would THAT do ANYTHING? I had been using tampons since high school and while they were familiar to me, I was willing to try anything (and had been - I even bought into that Livia scam and tried one of those devices but it did NOTHING. I did get my money back, though so there's that at least!) so I started to consider it. The only problem was that I DESPISED pads and didn't want to go back to that. I liked tampons because they kept it all contained. 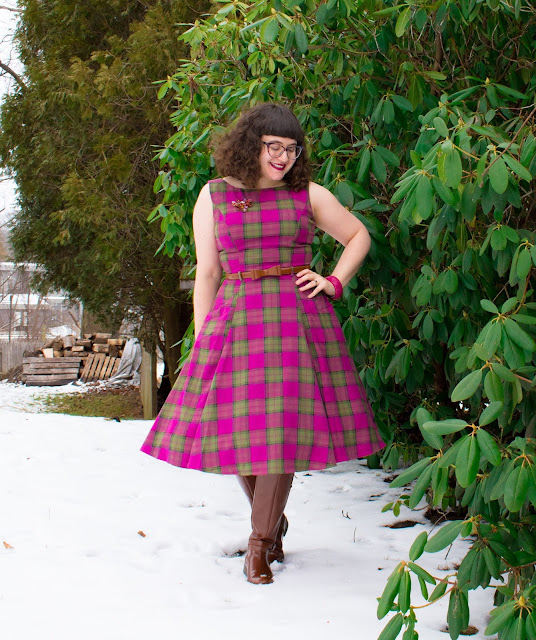 I asked a friend about her menstrual cup (she loved it and confirmed it did help with her pain) and started researching different brands. Many women reported that using a cup really did help diminish their cramps (yeah yeah but do these women have the same level of pain as me???). Other benefits of using a cup? You save so much money because you don't have to keep buying them like you do tampons/pads AND it's eco-friendly. I LIKE ALL OF THOSE REASONS, YES I DO! Again, I really didn't believe it'd magically help me but I figured it was worth a try because at the very least, if I liked it, I'd be able to stop buying tampons and I'd be environmentally friendly (which I prefer). 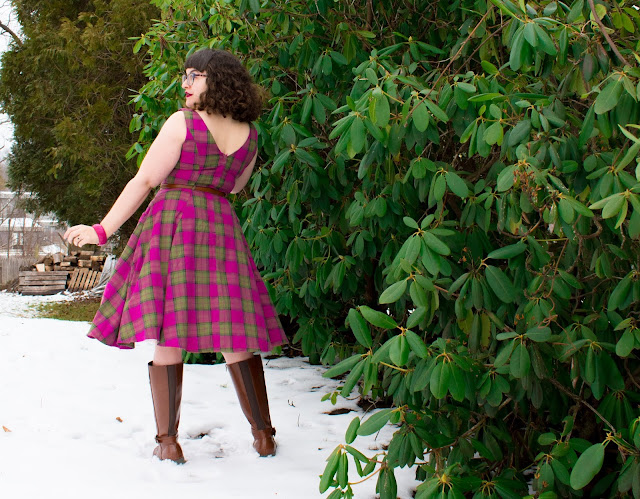 I went with the Lena cup as it is promoted to be the best for sensitive skin and the softest to help with cramps (it is made of silicone). It also had great reviews. As expected, it took some getting used to and some practice to get it in right, but honestly, I got the hang of it after just a couple cycles and I always keep pantyliners in my purse and use those if I am worried about a leak. Typically, though, if it's in right, there is absolutely no need for the panytliner and it's been fantastic (TMI - I  can even go to bed in the nude while using my cup!). 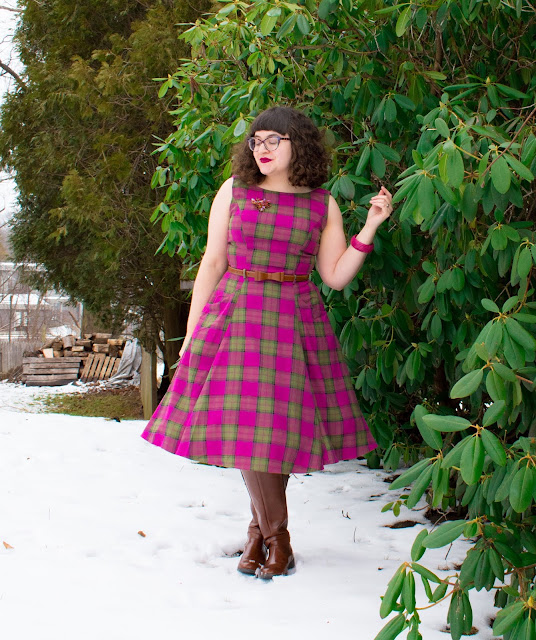 I bet you're thinking "oh no she is NOT about to say the cup cured her of her pain..." but guess what? I AM! I KNOW! I CAN'T BELIEVE IT EITHER! I started using the Lena cup in May 2019. May and June were kind of the same old/same old period with crazy pain and near fainting spells. But then July came and I got my period at work. And I was kind of freaked out because my pain was so manageable and it never got as intense as it did time and time again. I had cramps and discomfort, don't get me wrong, but with a few ibuprofen, I was able to carry on working without much interruption. I actually put the heating pad on at my desk "in case" because it felt so bizarre and so not right to NOT need it.

I assumed it was a fluke - a lucky month off for my birthday month. I never could tell though because then I got pregnant and didn't get another period for awhile after that. Fast forward through the shit storm that was my fall and then we land in November, when my periods returned after my miscarriage (fun fact, your period does NOT return for WEEKS after a miscarriage - your hormone levels still read as pregnant for a good 2-3 weeks after and you monitor it with annoying weekly blood draws. Then, when it is finally negative again, you have about 4-6 weeks or so before your period returns - I KNOW SO FUN!). 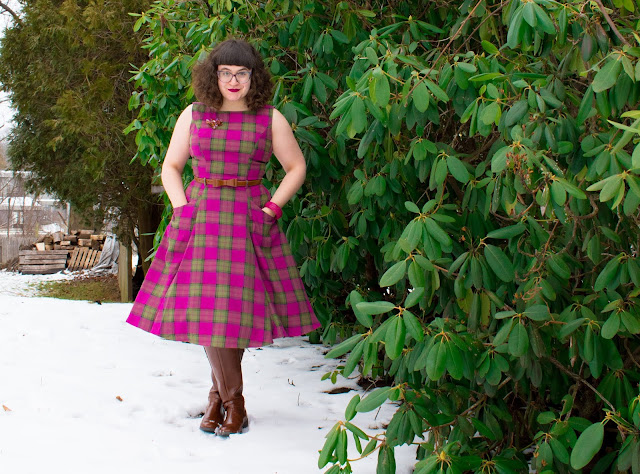 I got my period back on November 24 (almost a month after my blood draw finally said I was no longer reading as pregnant - oh YAY!) and it was shockingly just like July's - uncomfortable but tolerable. I even thought to myself, "wow what a prize for getting through a miscarriage." I actually thought that maybe my body was giving me an easy one after all I went through two months prior. SILLY ME. But what can you expect after just accepting so much pain every month for years on end?

Well, I have had two periods since the return of my cycles (December 28 and January 29) and none of them have been anywhere near the level of awful as they used to be - my pain level was always about a 7 or 8 and now, it's barely a 3 or 4. The only thing that is different is switching to the Lena cup. I don't know HOW or WHY, but it seems that when I stopped using tampons, my body chilled the F out. 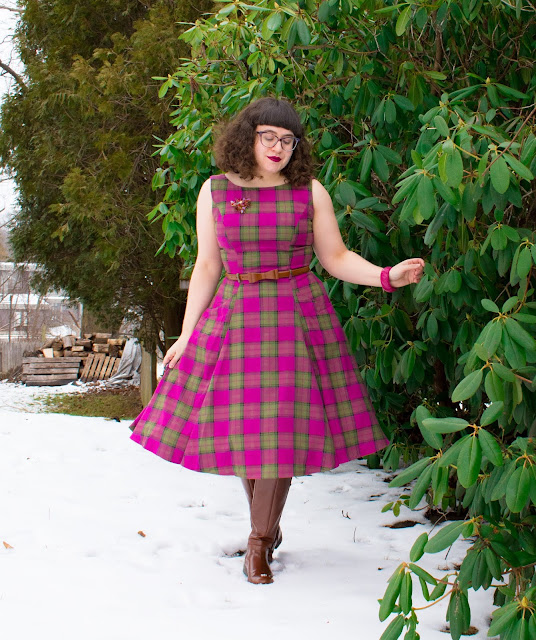 Could it be that the tampons (or what is inside of them) had been causing this pain all these years - ever since I was in high school? I have been hearing more and more about how awful the materials (and chemicals) in tampons are for women's bodies but never really listened - WHY AREN'T WE LISTENING? Well, I am definitely listening now. So if you suffer like I used to, consider what PRODUCT you rely on and start listening. Maybe it's time for a change.
Posted by SaraLily at 9:00 AM