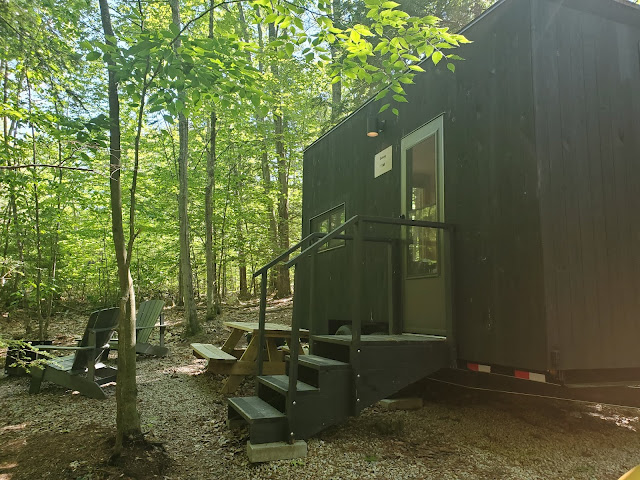 Since March, Cody has been in boot camp to prepare to test for his black belt in Krav Maga. That meant that on top of going to class 2-3 times a week, he also went to a 3 hour boot camp every Friday night, coming home exhausted and drenched in sweat. He had 2 pre-tests this spring and then on June 1, he had his final official black belt test, which lasted over 4 hours and was the most physically and challenging afternoon he has ever conquered. It was challenging to watch as well! Especially the final hour when I knew he was having trouble with his muscles cramping up on him. 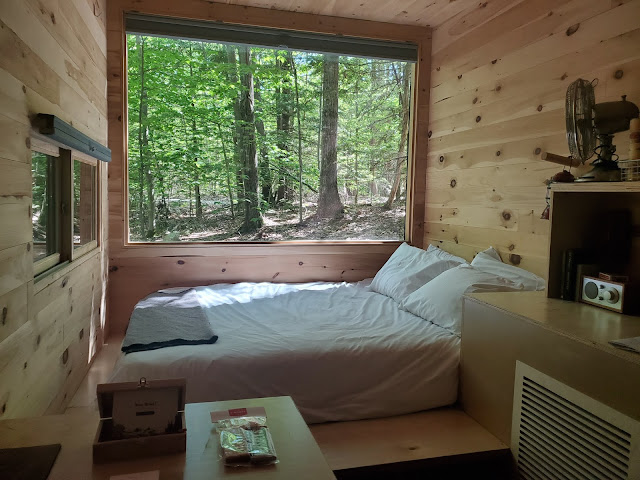 Still, he kept going and didn't give up and he PASSED. He walked out (well, limped out is maybe a more accurate term) a black belt! I was on the verge of tears for that final hour and definitely shed a tear or two when we knew the test was finishing up and that the students remaining had all passed the test. 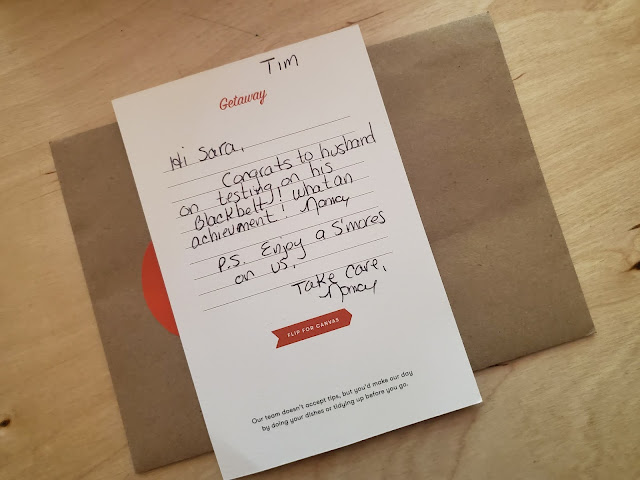 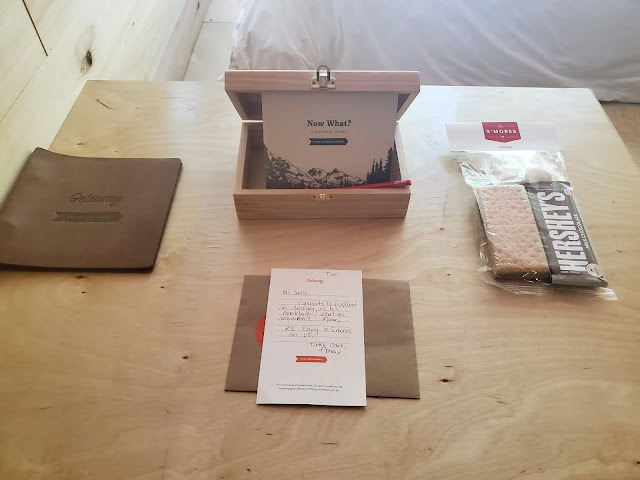 Earlier this spring, I had mentioned that we should book a little getaway to celebrate but Cody was against planning something in advance in case he didn't make it to the final test or didn't pass the final test. While I refused to believe there was any chance of that happening, I understood his hesitation. Still, by his second test, I knew he wouldn't fail and decided to book us a little celebration somewhere in secret. I asked myself one question as I researched what to plan: what would Cody REALLY want to do after getting his black belt? The answer? NOTHING. ABSOLUTELY NOTHING. 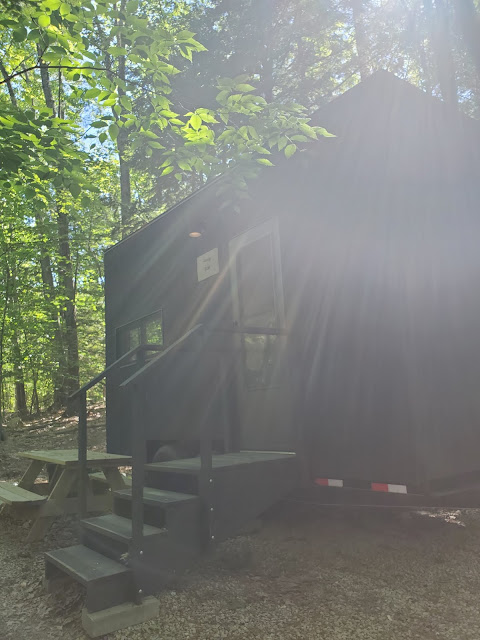 Easy! I booked us a night in the Getaway House and built a small itinerary for the two days. The Boston Getaway House is located in New Hampshire, about an hour and a half from where we live, and the small cabin in the woods promises an escape from, well, everything. The adorable tiny cabins offered no wifi and no TVs or electronics (besides a radio and a landline for emergencies) - just a HUGE window over your bed so you can relax, unplug, and take in the woods around you while you sleep and when you wake up. 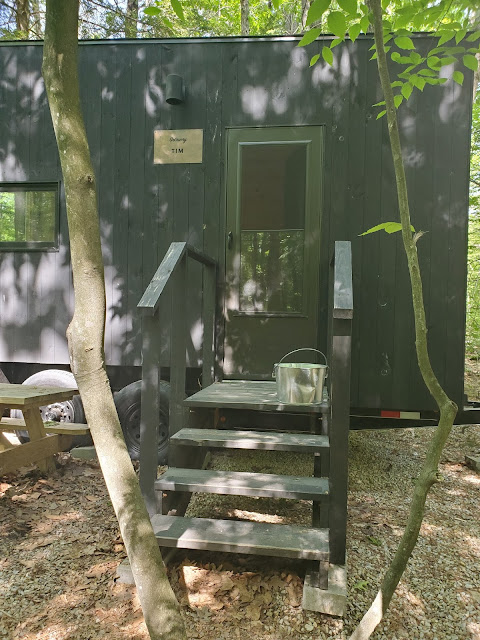 As we left the gym after his test, I told him about it and asked him how he felt about going up into the woods to do nothing but drink, eat snacks, cuddle, sleep, and sit by a fire for a night? He got a dreamy smile on his face (he was exhausted though, so perhaps he was delirious) and said "that sounds so good." 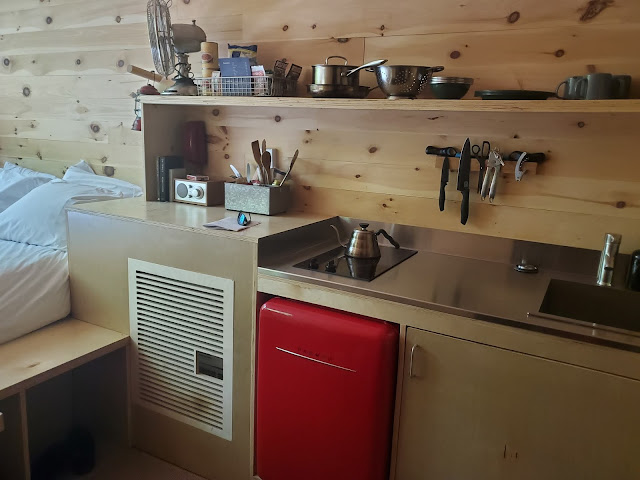 And that, my friends, is what we did this past weekend! We headed up to NH Sunday afternoon, stopping at a local brewery for some snacks and beer. We then checked out an antique market down the street and then had a late BBQ lunch, per Cody's request. Then we headed into the mountains! 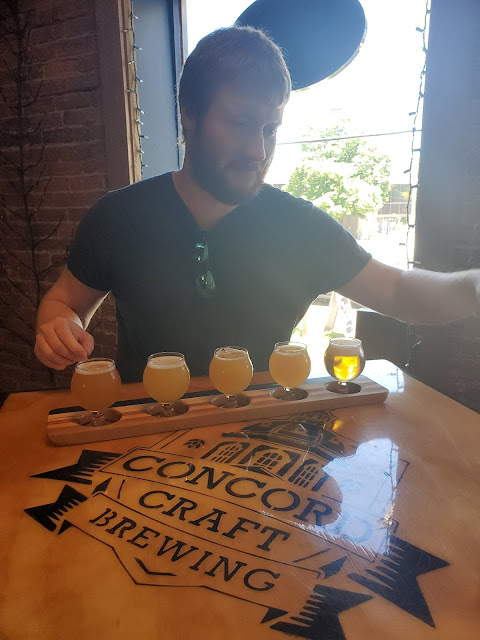 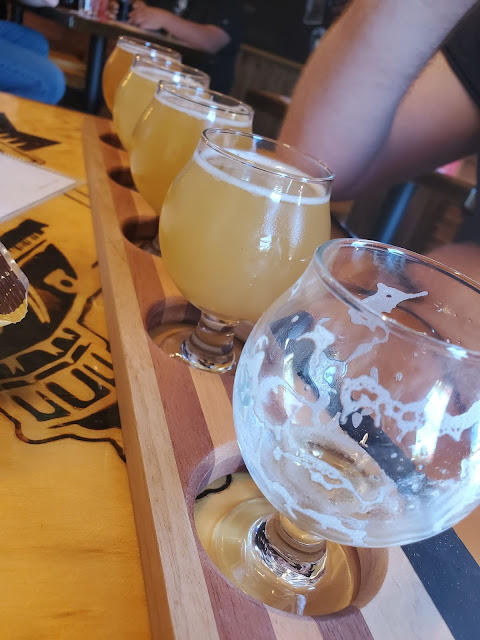 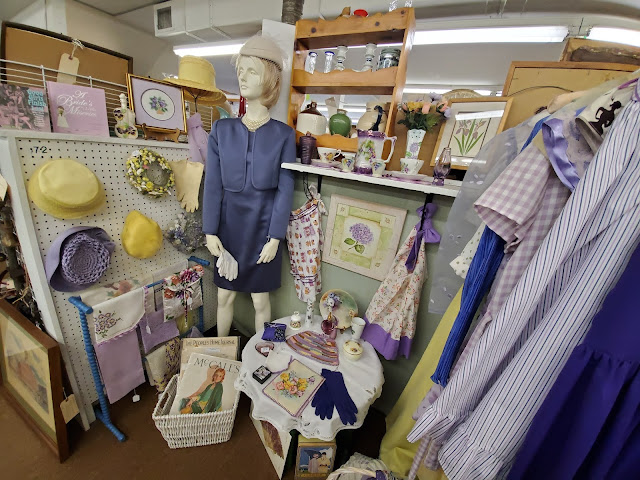 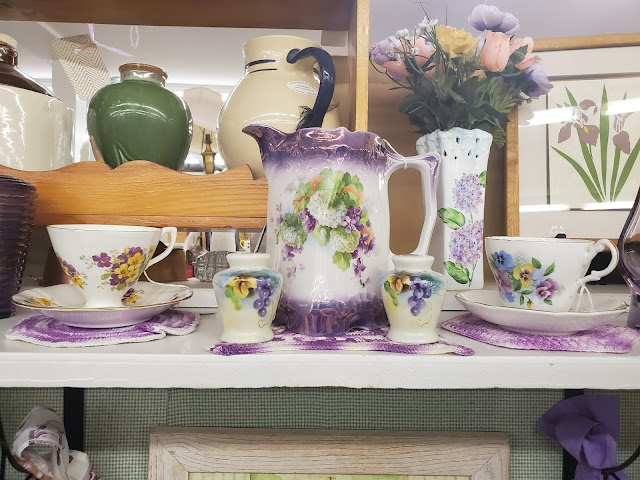 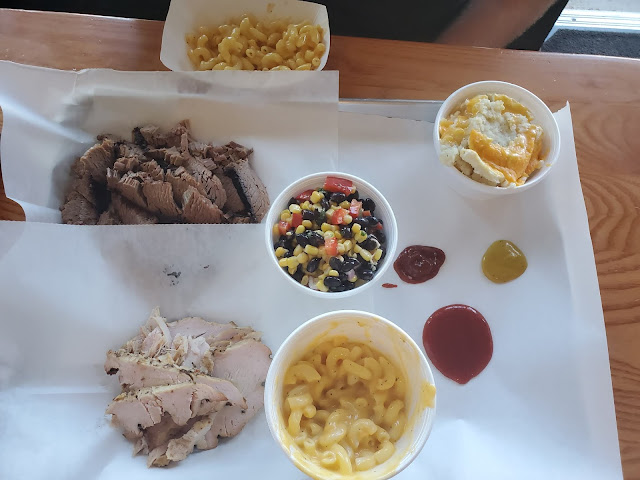 Because your Getaway is all about solitude and unplugging, there is no check in desk or lobby. You receive a text prior to 3pm with your house name and door code. That's it! We were given "Tim" for the night and didn't see any staff at all while there (they are a phone call or text away, however, if you need help). The tiny cabins come with a tiny bathroom with electric toilets, a little kitchenette with a mini fridge and they all have provisions you can opt to buy when you're there as well. 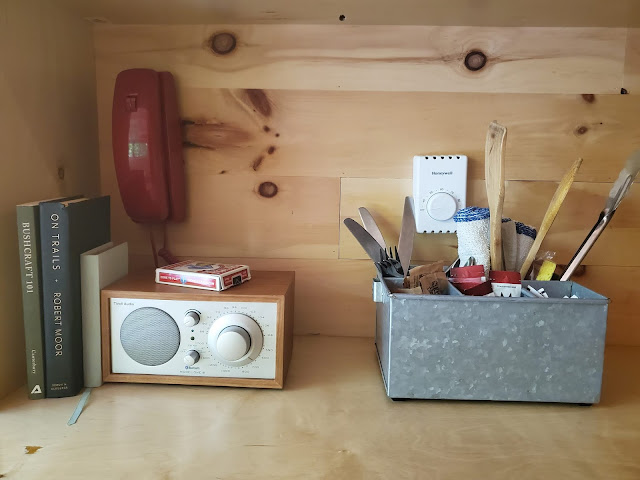 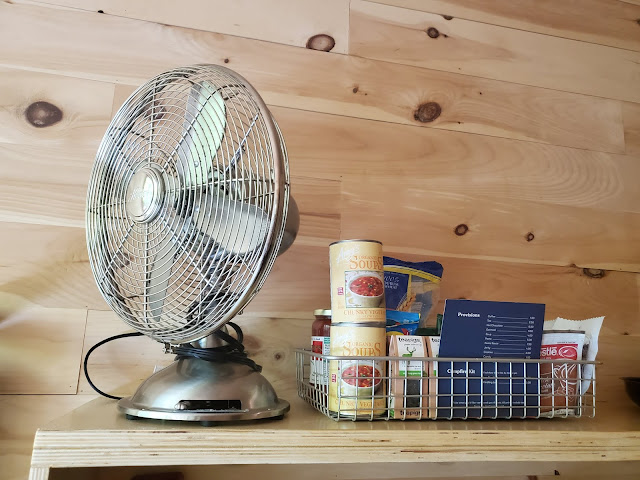 The best part? There is a box for your phones and you're encourage to leave them there until you leave. So we did! Upon checking in, we locked our phones away. We had no concept of time and just did whatever we want. The sun started to set? Time for a fire! It got dark and we got tired? Time for bed! Wake up to the sunshine in the trees? Time to start the day! 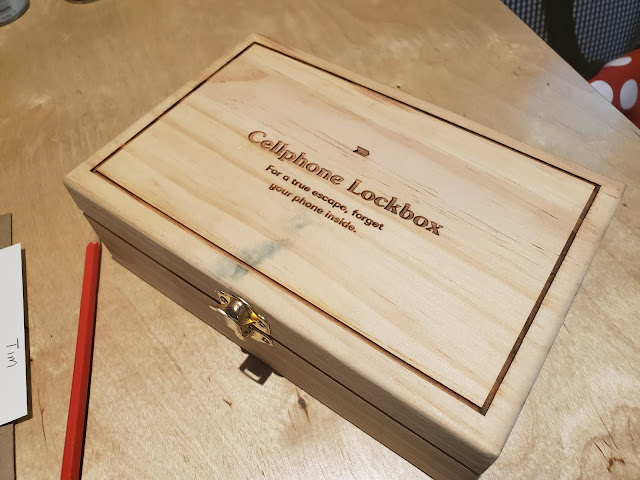 As corny as it sounds, it really was refreshing to do NOTHING but lay around with nature just outside a ginormous window. After an afternoon of lazing about (Cody took a cat nap and I read), we helped ourselves to some firewood to build a fire (for a separate fee, you can help yourself to everything you need to build a fire), got tipsy, and used conversation as entertainment (what a concept!) as we roasted hot dogs over the flames (hot dogs for him, veggie dogs for me). 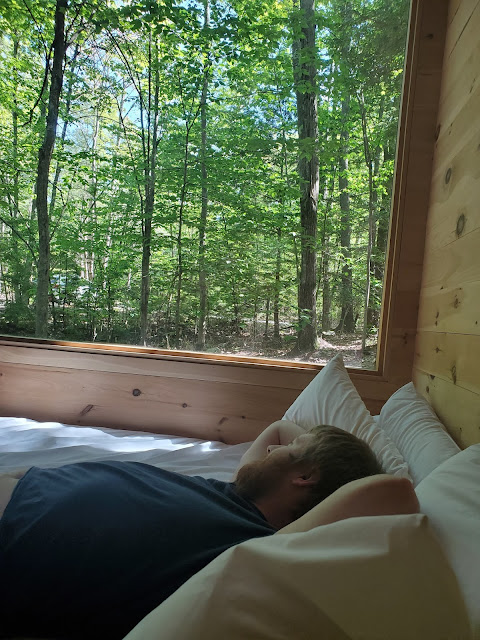 All in all, it was a very nice recharge. We love to have a "party for two" (what we call it when we grab drinks and snacks and get drunk together in a hotel room while we're away) and the Getaway House was the ultimate Party for Two! They do a fantastic job thinking of everything and provide all the tools you need for a successful night away. 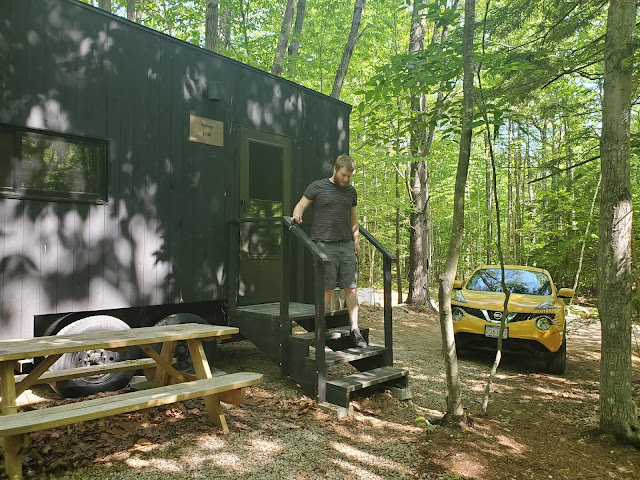 Getaway has locations all over the country so if you've got one nearby, I highly recommend you disconnect and experience a little break from modern life. It'll do you some good - it sure did for us!
Posted by SaraLily at 9:00 AM