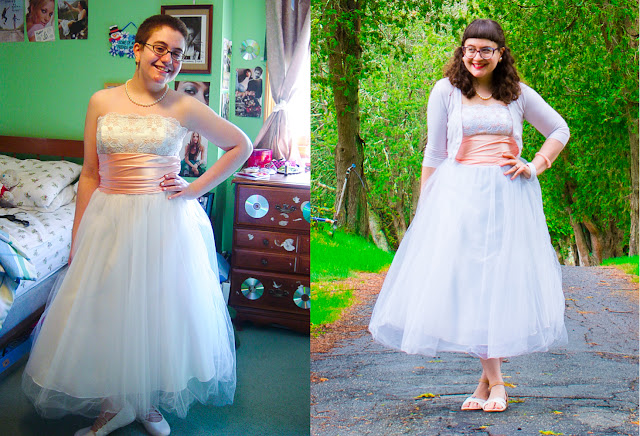 2005 feels genuinely like a lifetime ago. Does 14 years count as a lifetime? It sure feels like it does! And in honor of it being so long ago and in honor of Prom Season 2019, I decided to pull on the ol' prom dress and style it for the blog! 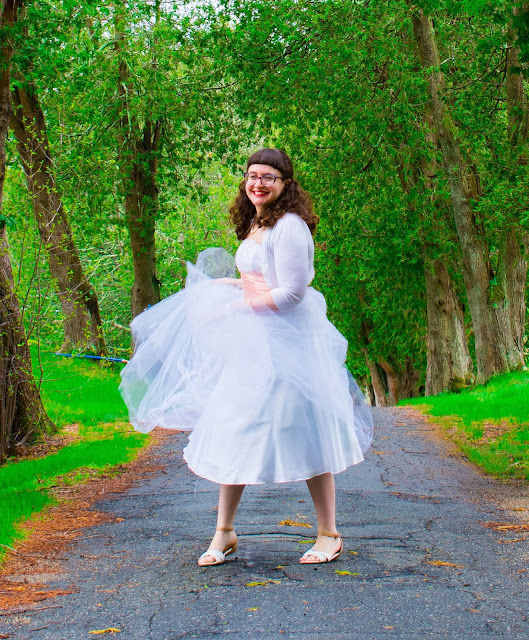 I'll be honest, it doesn't fit the same (though I actually weigh roughly the same, my body is obviously SO different than it was back then!) but I made it work for a few photos because HOW COULD I NOT? I loved my prom dress. I remember pulling it on and wishing it had a much puffier skirt but didn't know how other gals achieved that (FORESHADOWING MUCH?!). I have begun to feel that it is cursed, however... 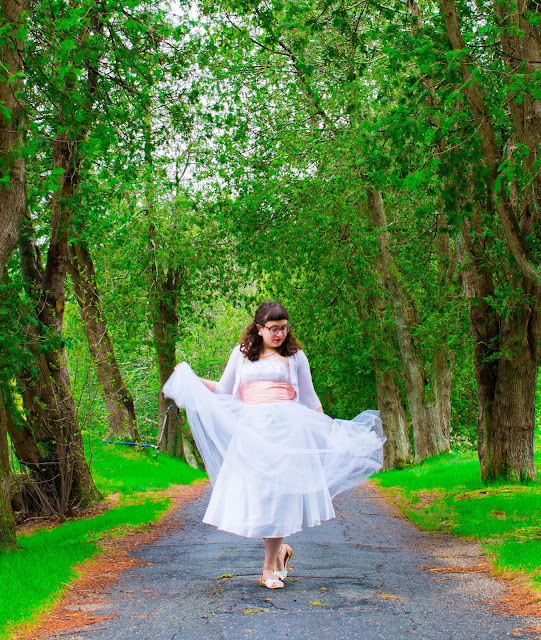 Let's go back, shall we? In 2005, I was a junior in high school and was just loving being 16. If you sense sarcasm in my tone then you're absolutely right - I did not enjoy high school and unlike many, do NOT wish to go back to that travesty. 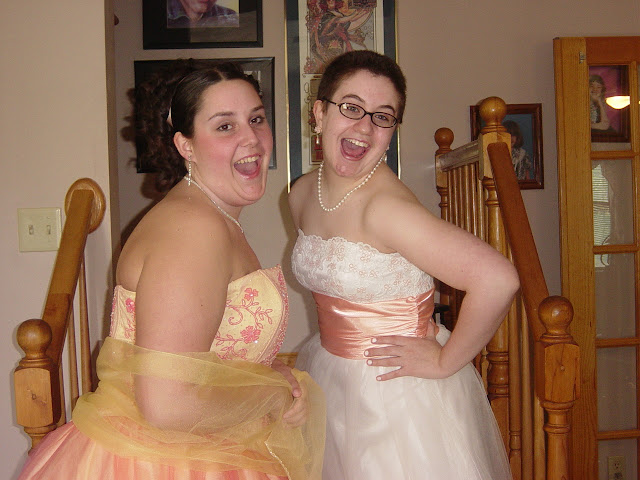 Hamming it up with my girl, Julie! We spent a lot of time making funny music videos to put on Vimeo or singing Disney songs in her Jeep - she was the first in our group to get her license! LIKE A BOSS! I remember loving this photo the most because it made me look skinny (UGH YOUNG SARA, STOP!) but now I just love it because of our silly expressions and how awesome we were together!

I don't know, I was an awkward teen. I was a late bloomer, struggled big time with harsh cystic acne, never really fit in anywhere, dressed differently, and was made fun of quite a lot because of that. The only place I found solace in was with our music department. I loved to sing and was a member of our A Capella choir for 3 years. I also entered every talent show and went for any solo I could for the concerts throughout the year. Chorus and performing aside, I didn't care for the social element of high school. I was a good student and got great grades but for as far back as I can remember, I have always been anxiously waiting for what was NEXT. When I was a kid, I wanted to be a teen. When I was in high school, I just wanted to go to college. When I was in college, I just wanted to be an adult with a job and be on my own. Basically, I was THAT kid who was constantly dreaming about being 30 (thirty, flirty, and thriving - that movie was creepily close to how I felt, only I didn't have a cute Mark Ruffalo pining after me). 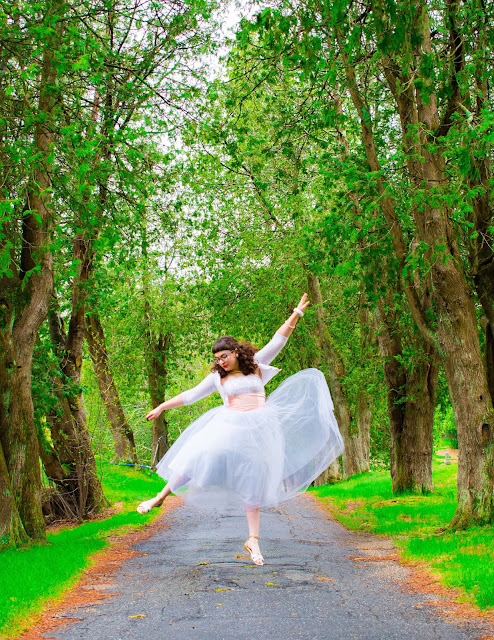 I did, however, enjoy dressing up for semi-formals, dinner dances, and of course, junior prom. We had it at some country club somewhere local and it was a nightmare from the beginning, if I am being honest. I decided to invite my ex-boyfriend (which was really just a boy friend that I held hands with and danced with at dances, TBH, because I was oblivious to how relationships worked) as my date because we were still friends and my crush humiliatingly turned me down when I worked up the courage to ask him to go with me (BTW, my "prom-posal" to him was EPIC - I bought the prom issue of Alternative Press magazine that had his favorite band on the cover IN prom attire and in their article, I left a note that asked him to go to prom. He never addressed it but I heard later that he showed everyone on the bus and they all made fun of me - nice, huh?). 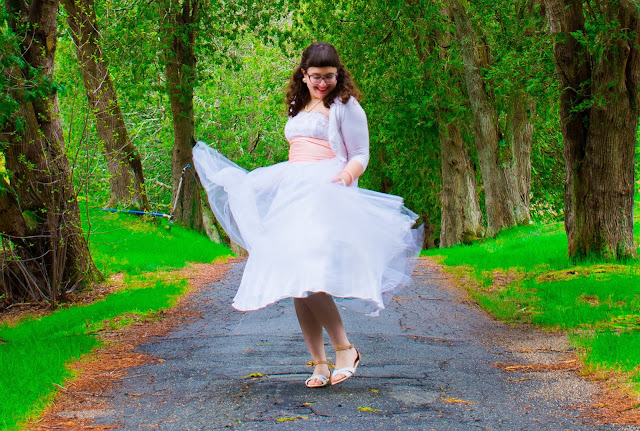 Then, about a couple weeks before prom, my ex-boyfriend (and now prom date) started dating my ex-best friend that I had a falling out with the year before. I KID YOU NOT. He respectfully promised to still go with me regardless but had the balls to ask if she could come in our limo to prom. I STILL KID YOU NOT. We discussed it and made a compromise. She would NOT come in the limo with us (#awkward) but he could dance all the slow songs with her at the prom itself if he wanted to. Was that fair? It's debate-able but I also would have felt SO weird to be dancing with him knowing she was somewhere giving me the stink eye. 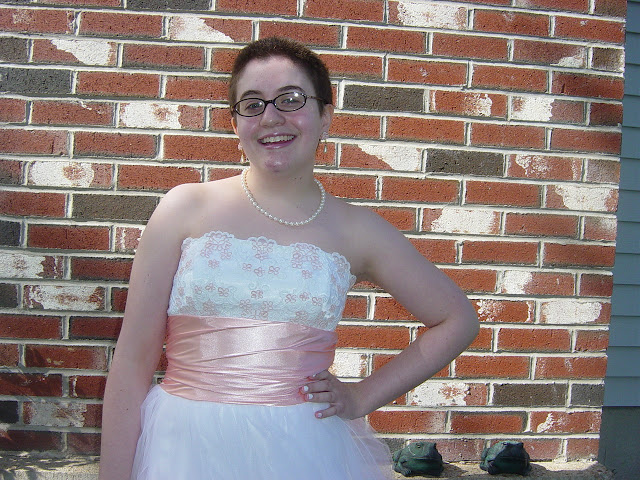 Then, the day of, our limo NEVER SHOWED UP and they didn't answer the phone when my father tried to contact them to find out where they were. The best part? The limo company was called RELIABLE Limo. STILL REALLY NOT KIDDING YOU OVER HERE. 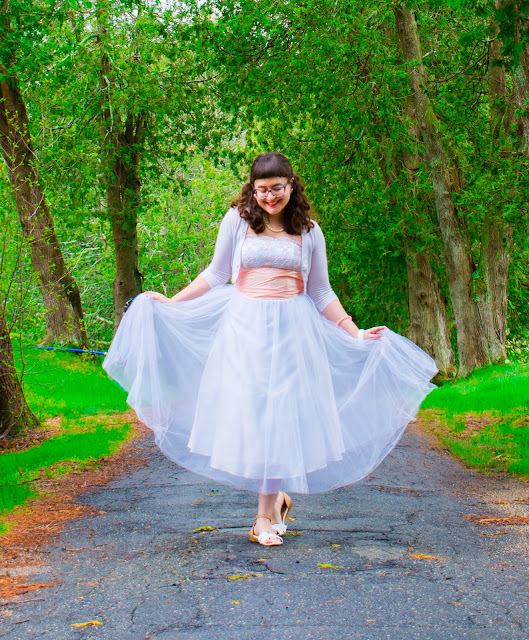 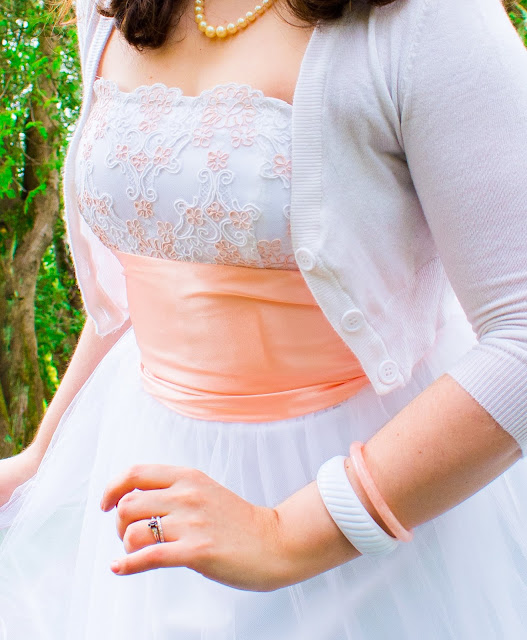 OH! By the way, remember that crush that turned me down without actually turning me down? Yeah, he then asked one of my close A Capella friends to go with him to prom and she actually said yes!!! I CAN'T MAKE THIS STUFF UP, PEOPLE! 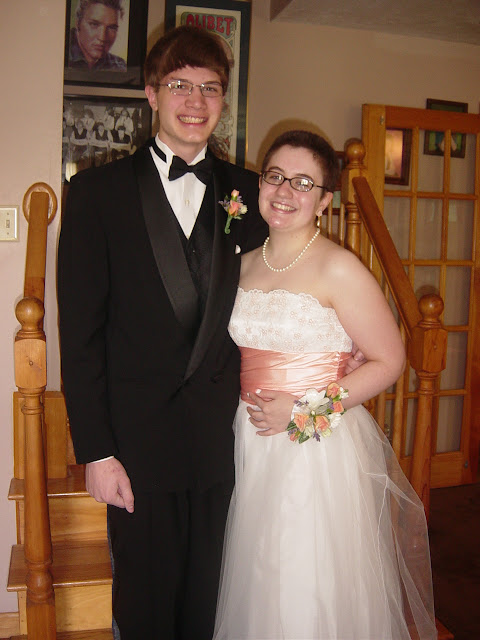 With my prom date/ex-boyfriend, Anthony (WHY DIDN'T I JUST GOT ALONE?)

Anyway, we gave up on the limo and piled into a friend's family's massive SUV and got to the prom in time. I don't remember much after that other than dancing a bit with my friends and snapping tons of photos on a disposable camera and half of them coming out like shit but I do remember one thing very clearly - I loved my dress and my shoes. I found this very vintage ballerina-esque tea length dress at DEB's (a popular store in a local mall) and then found a little pair of white Rocket Dogs that kind of looked like ballerina shoes with their criss-cross elastic detail on front. I wore those Rocket Dogs until they wore through the bottom for years after the prom. They were the BEST shoes ever. 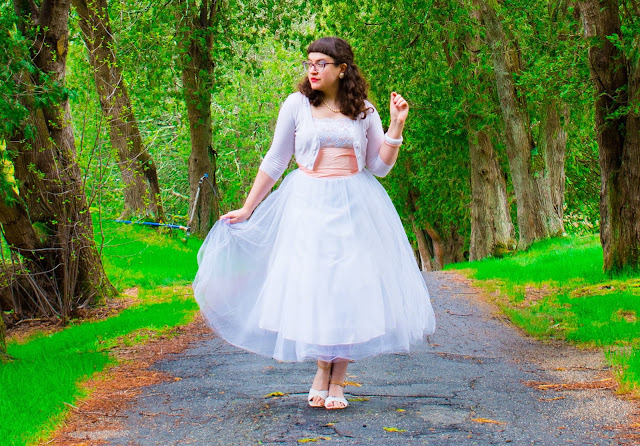 I think it's funny to look back at what I wore to prom considering the way I dress now. It was like even back then, 14 years ago, 30-year-old me was in the back of my mind, pushing the vintage/retro style on an oblivious high school Sara. And yes, I DID have buzzed hair, you observed correctly. I was awkward, I told you. I don't really have an explanation other than I thought I was punk rock (Hot Topic & Vans Warped Tour 4 Eva!) and didn't want to deal with my curly hair everyday (no one had taught me how to care or style it). Such a dramatic teenage thing to do, right? 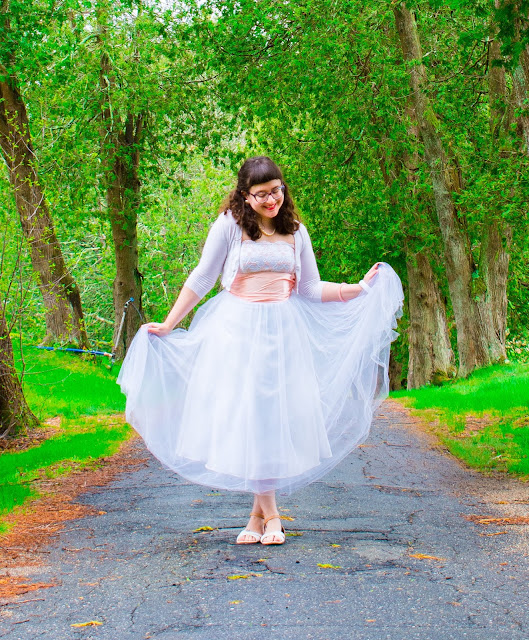 Oh man, that has been a trip! Looking back at my experience, it's hard to believe ALL that actually happened and I kind of just shrugged it off and carried on. I was awkward AF but I was also kind of a bad ass. You go, Past Sara! She definitely paved the way for Present Sara and made her what she is today and, for that, I am forever grateful for that baby-faced misfit of a girl. 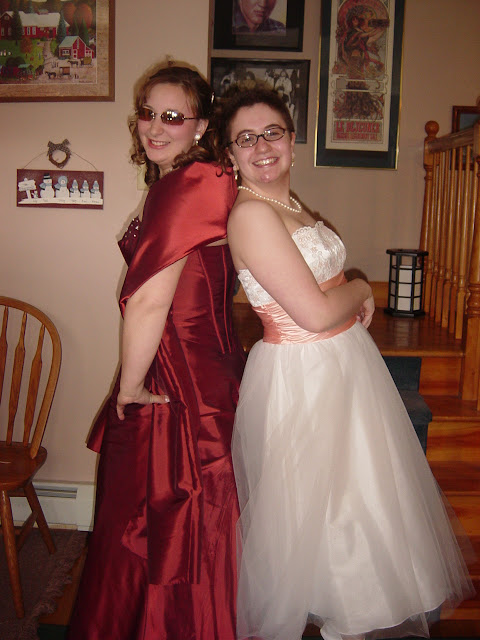 With one of my chorus friends, Suzy! Her father was the one with the Expedition - he saved us! Dropped all 8 of us off and picked us up at the end of the night. Such a good guy!

So why is this dress cursed? Well, it brought some bad luck when I was off photographing it. I planned to go to an old cemetery near my house (one I often photograph in because no one is ever around and it's quite beautiful). As I pulled up out front, I saw a couple soldiers and assumed they were maybe putting out flags for Memorial Day. I then remembered the back of the cemetery off another road and decided to swing around so I'd be away from them and not disrespecting them in any way. 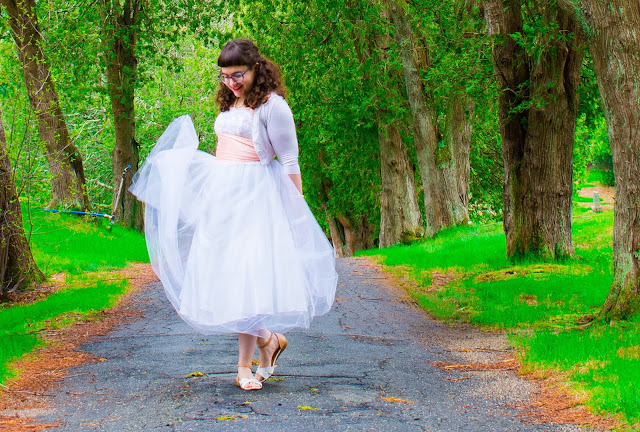 I parked in the back and was about to get out of my car when a cop car pulled in behind me followed by A HEARSE AND AN ENTIRE FUNERAL PROCESSION! I was shocked - I didn't think they buried people there anymore (all the graves are from the 1800s and early 1900s). All I could do was wait for all the cars to pass my car and park along the path. I decided once they parked and gathered for the burial, I'd sneak out of my car and down to the other side of the cemetery to not be anywhere near them - because you know, I was in a PROM DRESS AND ALL. But then...IT STARTED RAINING! 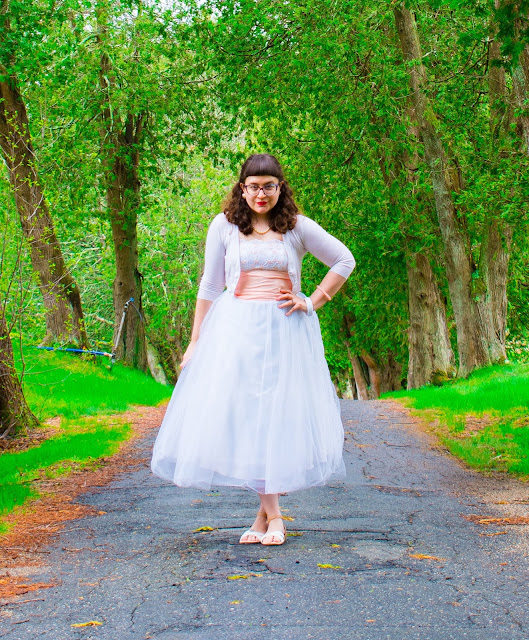 Long story short - it stopped raining after a few minutes and I was able to sneak out of my car and down to a hidden area very much away from the burial to snap these photos. The entire experience just confirmed what I suspected already - this prom dress is cursed! So so cursed!

Anyone else have any embarrassing prom stories? DO TELL!
Posted by SaraLily at 9:00 AM