Meet Me in the Clouds (Unique Vintage Dolly Dress)

This dress and this post is kind of a funny story. A story of bad luck vs. fate. Let me begin by saying that I never expected my eyes to land on this beauty of a dress from Unique Vintage this summer. Now, let's rewind to July. For my birthday celebration, I didn't want to do much but spend time with Cody and Red. We decided to do something together, a double date for Cody, myself, Red, and her fiance, Jimmy. 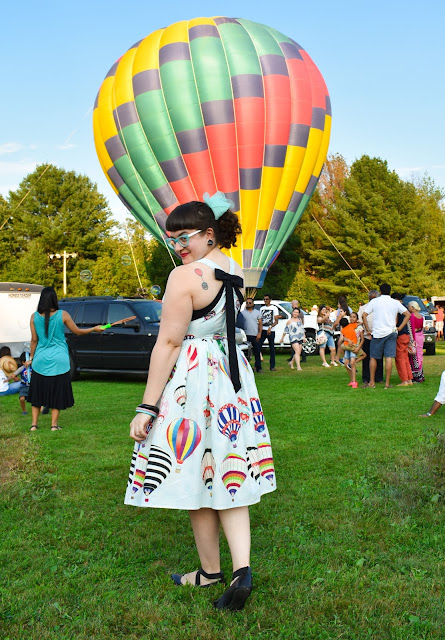 The weekend before my birthday, there was a Hot Air Balloon festival happening in Connecticut and we were READY to take the 2.5hr drive down and make a day of it. I was excited to wear a colorful dress and see some beautiful hot air balloons. I have always loved hot air balloons. They are so beautiful and intriguing and though I'd LOVE to ride one, I also feel like I'd be terrified. Well, from there, a sequence of shitty events took place and our plan spiraled down the disappointment meter. The festival ran Saturday and Sunday and we decided to attend on Sunday. The weather was AWFUL the few days before, lots and lots of rain and downpours. 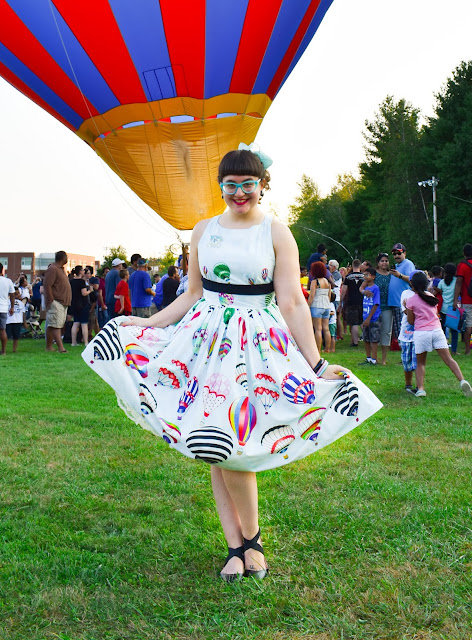 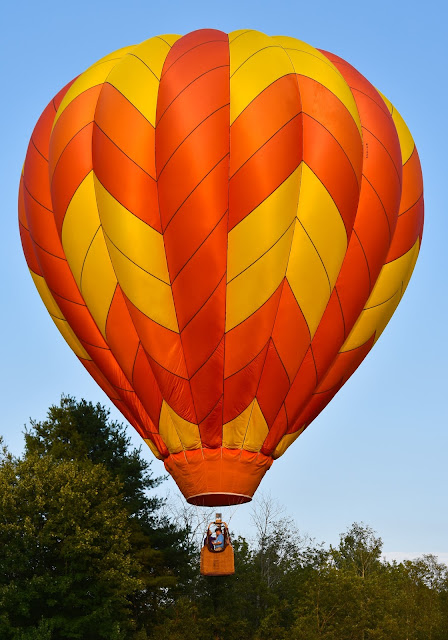 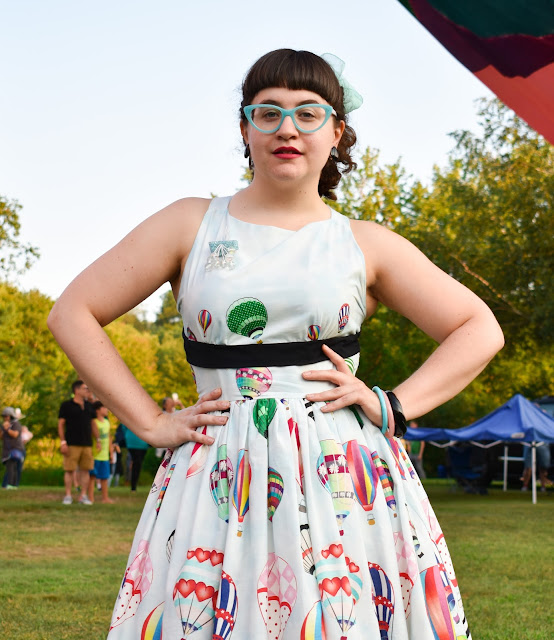 So much so that throughout Saturday, my Facebook newsfeed was full of horror story after horror story from attendees at the event about how muddy, how wet, and how awful the parking field was and how dozens of cars were getting stuck, damaged from other cars, and how tow trucks were coming in and charging people to free their cars from the mud. 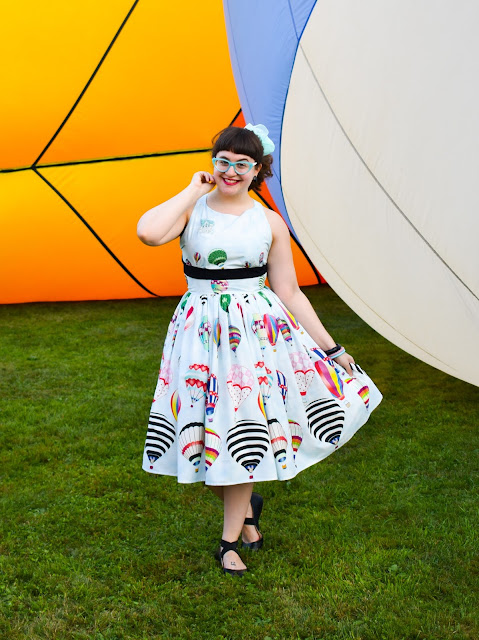 They were also complaining that the traffic going in was HORRENDOUS and that there were no bathrooms, limited food offers, and hardly any balloons due to the forecast.  Needless to say, my heart was dropping. This did NOT sound worth the 2.5hr drive. So we called it off - it was not worth the long drive. We didn't get our money back on the tickets either but saved ourselves a disaster for sure! 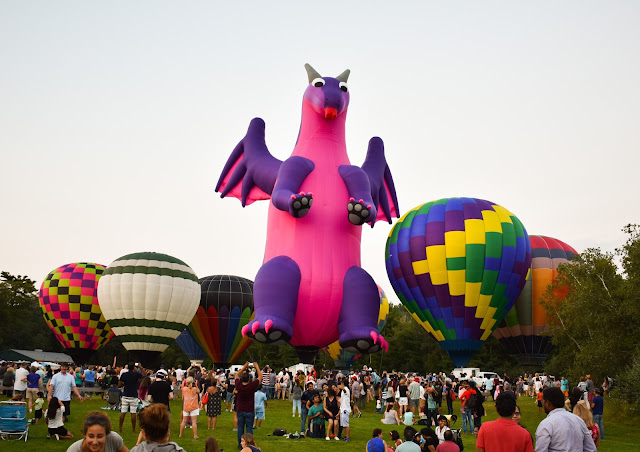 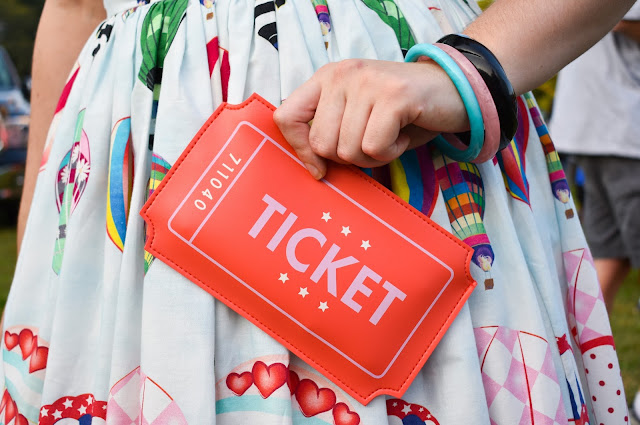 In the meantime, as we were deciding what to do, I tried on the dress I wanted to wear and photograph among the balloons (the purple and yellow floral Hamilton dress from UV) and it was just wrong in so many ways! Too big in the waist and bust, too long in the torso and everything I did to make it look OK didn't work out. I had to admit defeat and re-sold the dress on the BST groups on Facebook. 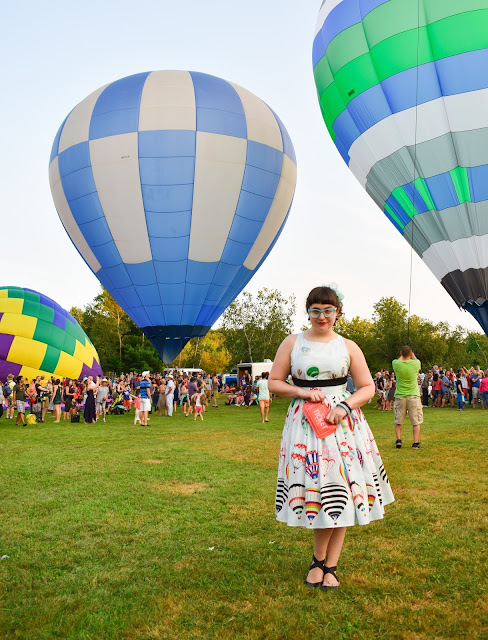 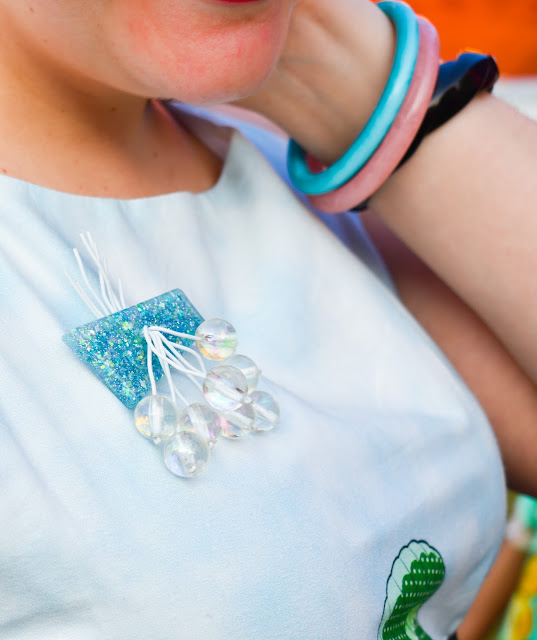 What extremely bad luck, right? Happy freakin' birthday to me!

Then, right after my birthday, I saw Unique Vintage release their circus line and spotted this dress, covered in hot air balloons. I laughed at the irony but also fell in love with the dress (that BOW!!) and, cackling, I ordered the dress. 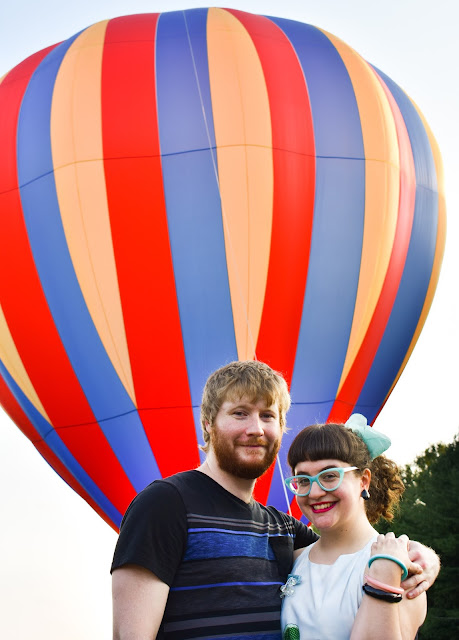 In a twist of fate, as I waited for my new dress to arrive, I heard of another balloon festival. This time it was only 20min away, in familiar territory, and with much better organization. WHAT ARE THE ODDS? 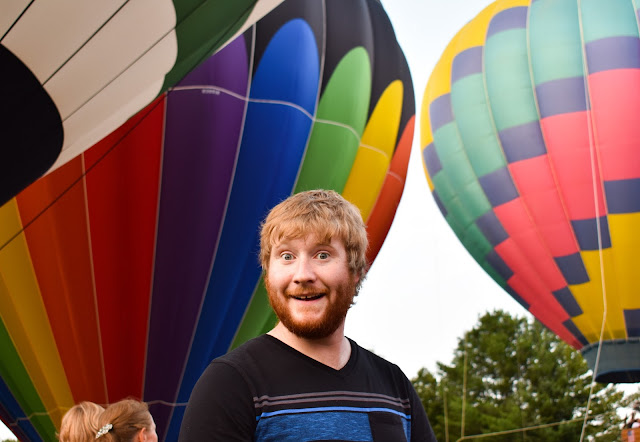 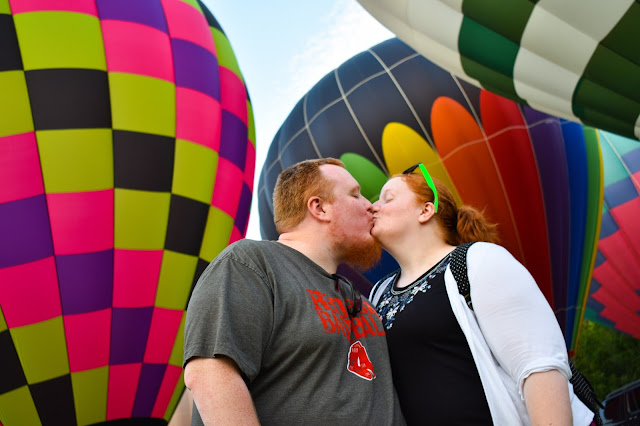 Fun all around! Red will probably hate me for posting this photo but whatever, I'm maid of honor - I do what I want! ;)

So we went - albeit over a month overdue - but we went and I got to see these massive and colorful balloons while wearing actual balloons and all was right in the world! Dare I even say it was BETTER this way? 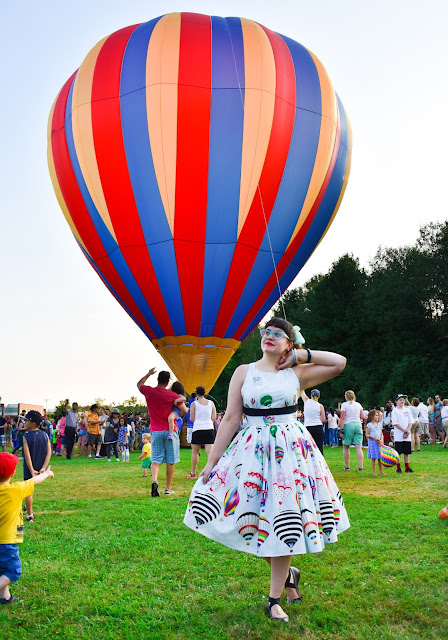 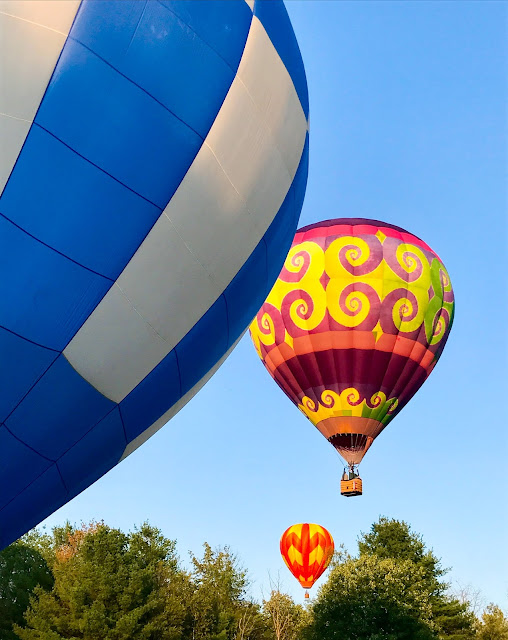 A lot of people appreciated my dress at the festival (which didn't surprise me much) but some even asked to take my photo! I don't mind and have no issue doing so (at least they're asking first) but it's a bit surreal and odd. I am not a celebrity - just a girl who loves her dresses! 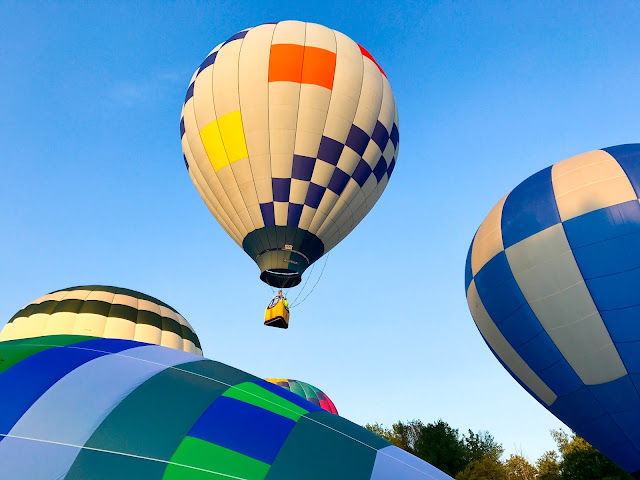 Someone even sidled up beside Red as she snapped my pictures for this post and actually began giving direction, asking me to "hold up the fabric of my skirt to show the balloons" before taking her own photo. Quite strange/amusing! 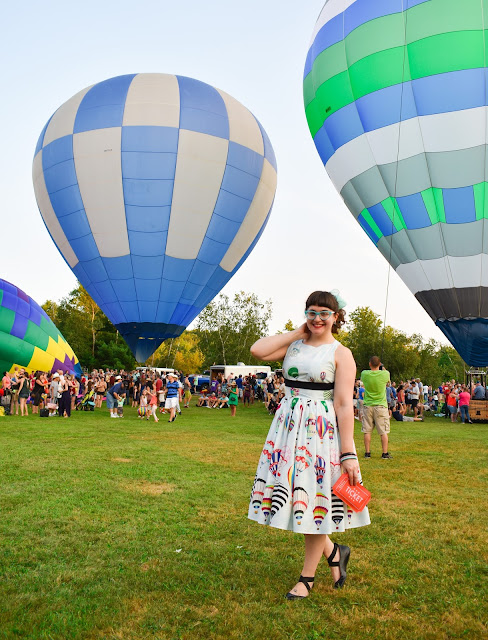 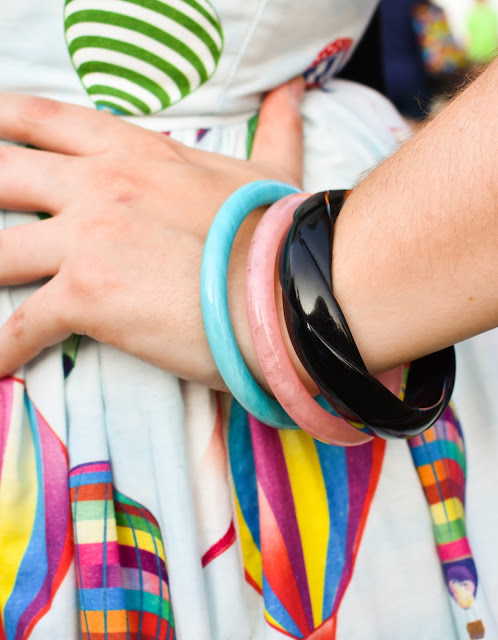 We had a ton of fun all around, though we were all melting a bit in the nasty humidity and there were A TON of people around (making it a challenge to get decent photos), but were impressed by the number of balloons on display and how well organized everything was (compared to the shit show we heard about in CT).

They were extremely impressive once they all started to get blown up, especially the grand finale - a HUGE dragon balloon with its adorable red tongue sticking out at us as we departed. I can only imagine how expensive he was to make! 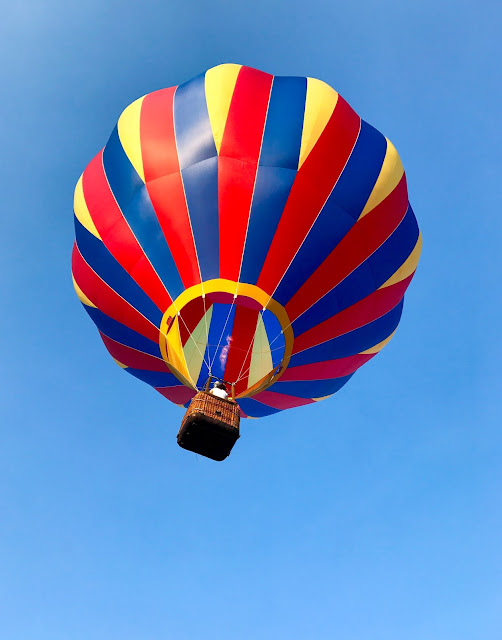 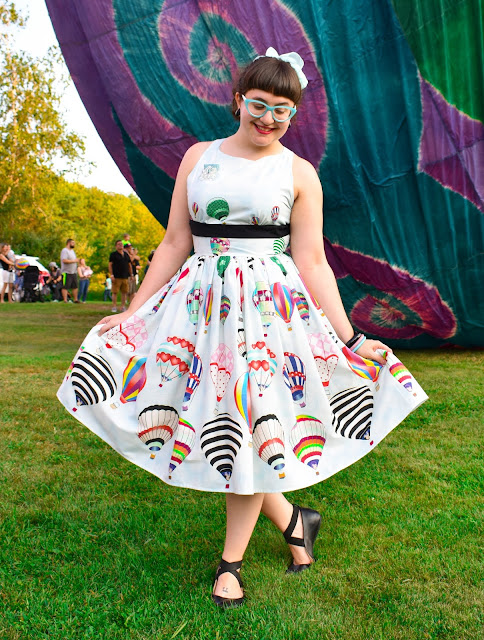 So again, I bring up - was this just a string of superior bad luck turned good or honest to God fate? 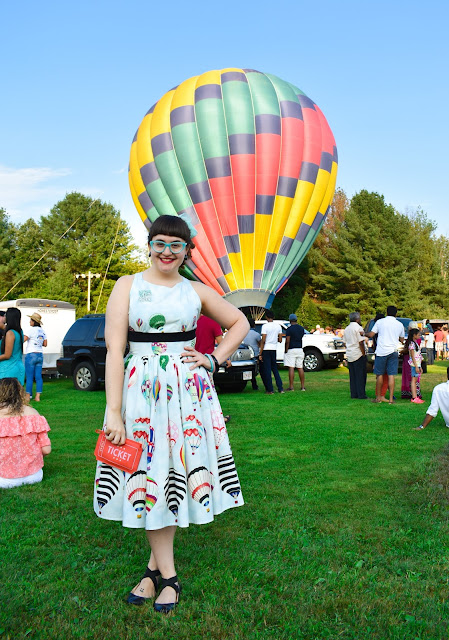 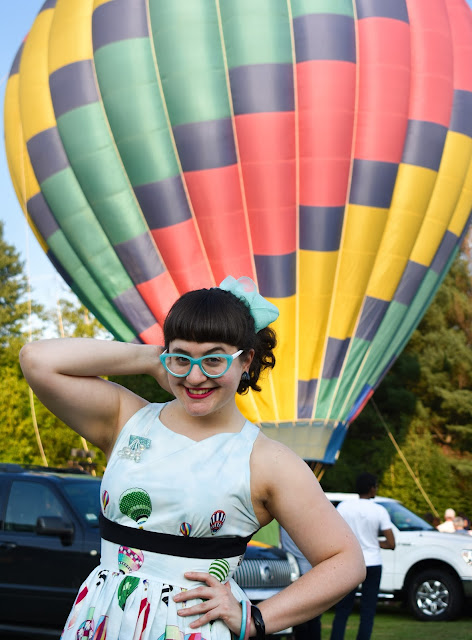 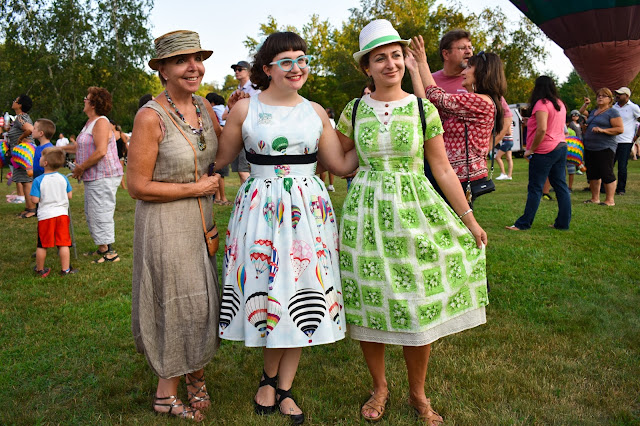 This photo was fun to take - these two stylish gals approached me as I went to approach them and we all gushed over each other's outfits. They were vintage appreciators too! It was nice to stumble upon other women who love fashion from other decades as much as I do for a change!
Posted by SaraLily at 10:00 AM