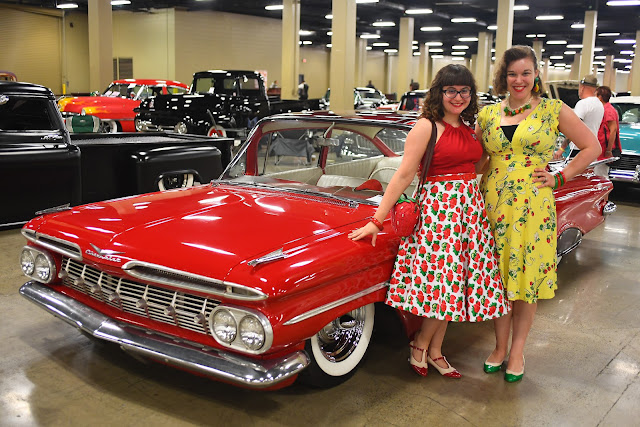 As some of you are aware from my Facebook or Snapchat, I spent this past weekend in Nashville for the Nashville Boogie! Cody and I took flight early on Thursday morning (7am flight, hello!) and landed in Nashville before 9am. 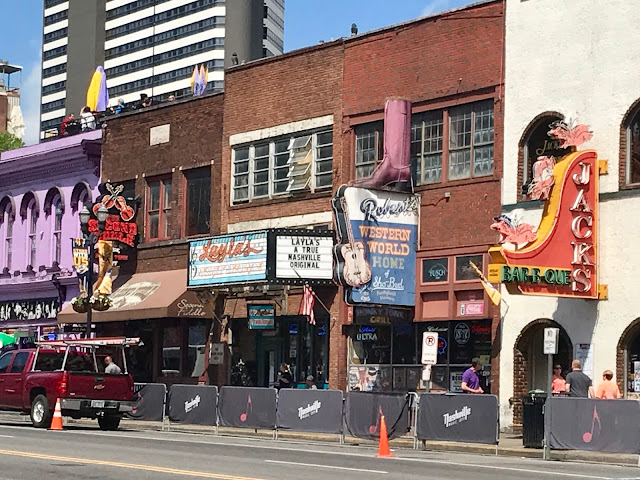 I did this so that we could have the entire day Thursday to explore together before the Nashville boogie started. We went from the airport straight downtown in our little rental car that could to wander around and see a few museums. 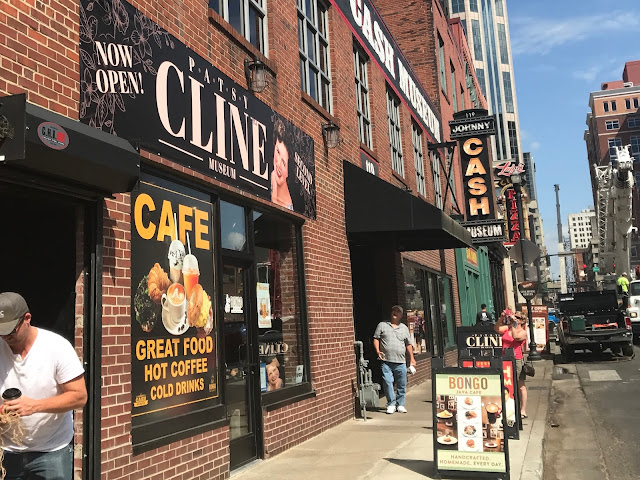 First thing we did was take in the Johnny Cash museum, which we REALLY enjoyed. We aren't huge museum people but if it's a good one, we will pay the crazy admission fee to see it. The Johnny Cash museum is a must-see. There is a Patsy Cline museum up on the second floor as well but we didn't make it up there. 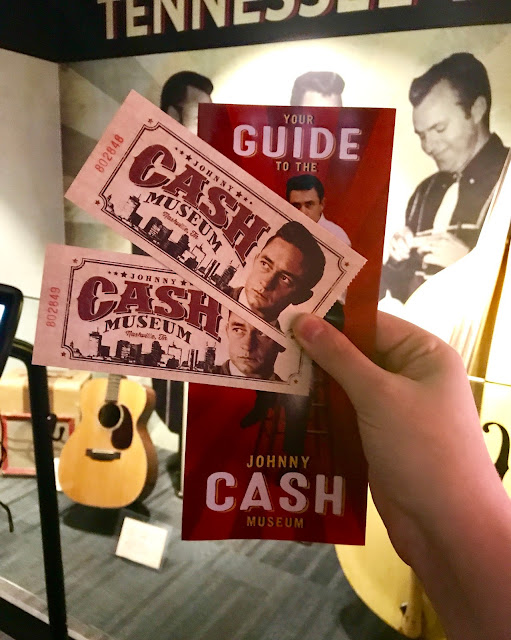 What we liked about the Johnny Cash museum was how it offered more than just his clothing, guitars, and photographs. There were letters, recordings you could listen to, and even a tablet that let you play the same song from different formats and hear the differences - vinyl, 8 track, cassette, digital, and even a remixed version. It was pretty cool! 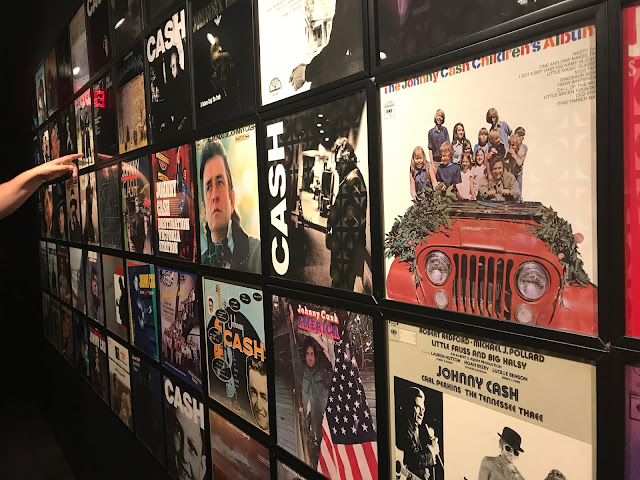 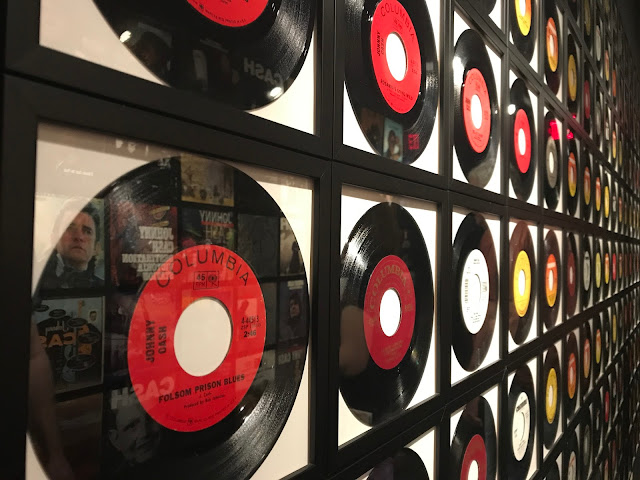 Of course, I loved seeing the clothes and the costumes from Walk the Line (his bio pic with Reese Witherspoon and Joachim Phoenix). I also loved the narrow hallway that was completely lined from floor to ceiling with his albums on one side and 45s on the other. It was incredible to see just how many albums he had! 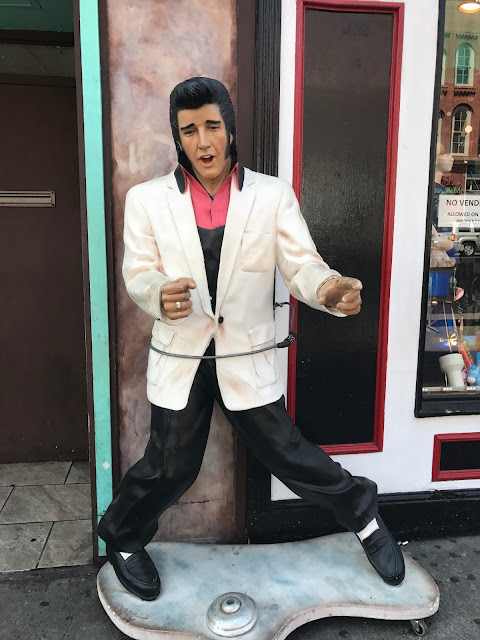 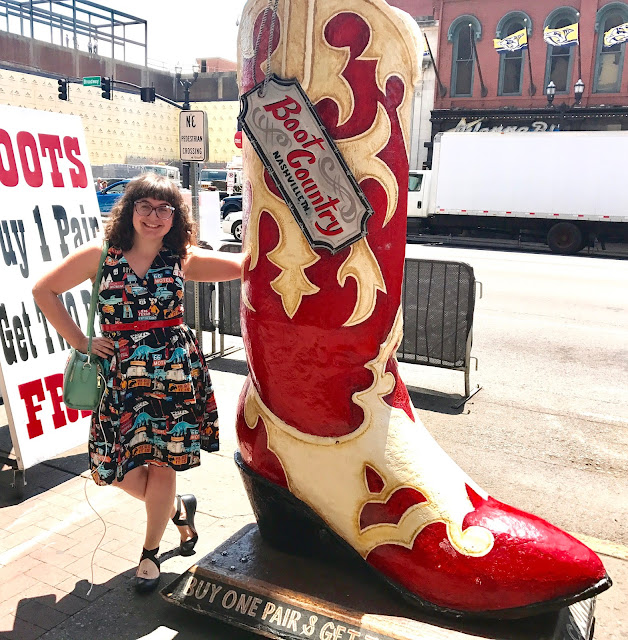 After the museum, we strolled and window shopped on Broadway Street and found Jack's BBBQ for lunch. Cody inhaled a brisket sandwich (with all kinds of sauces to sample - his favorite thing!) and I had some smoked chicken and macaroni and cheese. I swear Cody had heart eyes as he chewed. He was in BBQ heaven! 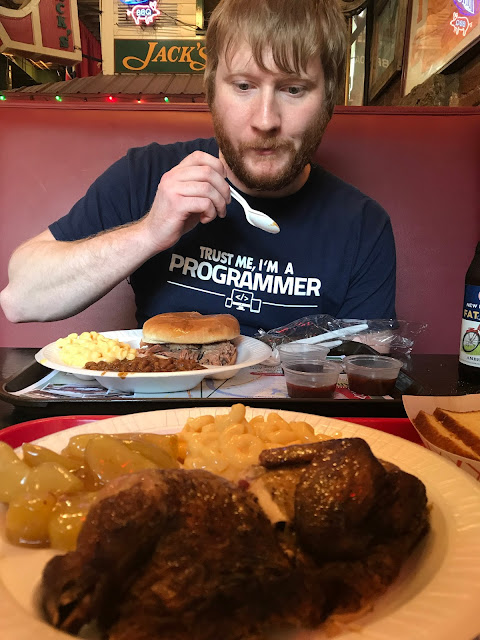 Look at that cute face trying each sauce before digging into his sandwich! I may be biased...

We checked in, spent the afternoon in the pool and then that night we met up with Bristol and Bob for dinner and drinks in the evening. I cannot even explain how awesome it's been to meet up with these two at every weekender I get to go to. We first met at the New England Shakeup, then I spent some time with them in Vegas for Viva in 2016 when I was able to go to a little of it during a work trip, and now we took over the Boogie together! 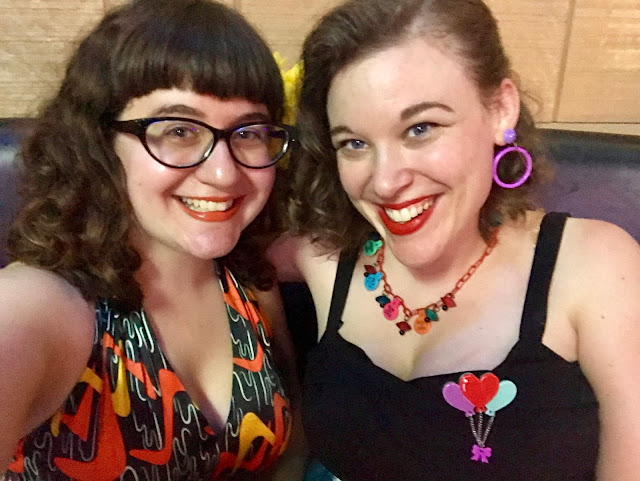 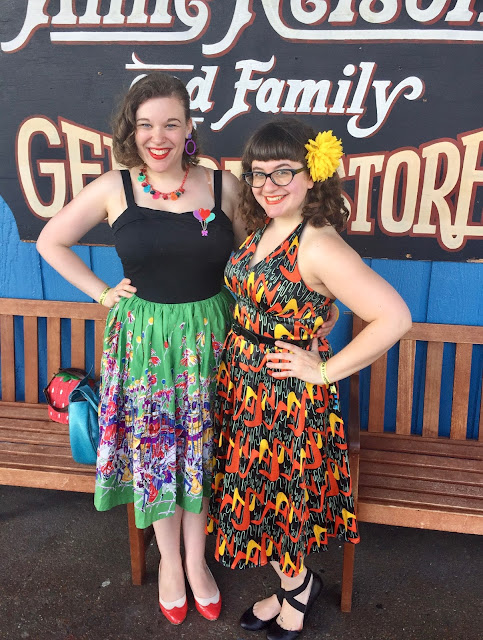 On Friday, Cody was on a mission to find some good Hot Chicken while Bristol and I shopped til we dropped at the car show. We drooled over some gorgeous cars and visited the vendors early on - it was quiet (which we have found to be normal at these weekenders where the bands play past 2am!) but that meant we had the pick of all the great deals! 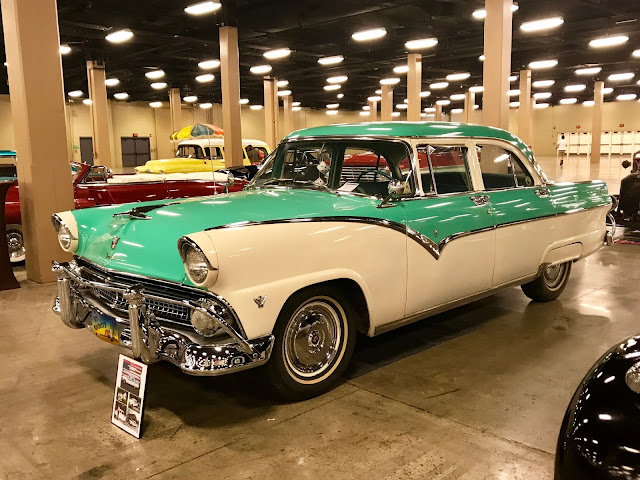 I found that Nashville had some GREAT vintage to offer - with great prices and much more variety in sizes! So much so that I bought over 4 vintage dresses!! I also snagged a bangle, some brooches, and a pair of earrings. Man, I was on a roll! But when you can get 2 vintage dresses for $100, you take advantage and snag the ones you see in your size! It was amazing! I also met and talked to so many of the vendors. One vendor remembered me from Brimfield Show, the flea market in my area. They were all so sweet and exchanged cards with me (theirs for their shop and mine for this blog!). I will definitely be a returning customer for some of these vintage shops! 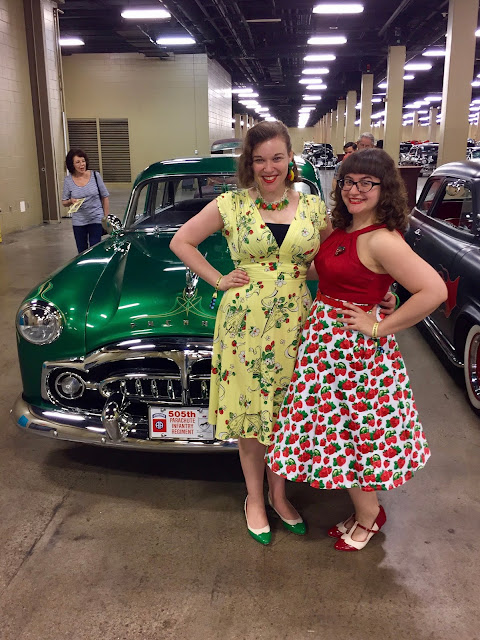 We also enjoyed the Pinup Pageant and rooted for some gals we knew from social media. All the gals were total knockouts and did pretty well considering how stupid the questions were that they were being asked. They were the opposite of open-ended and the girls had no time to show any personality! What host asks a contestant "who is on the 2 dollar bill"? How is THAT at ALL open ended enough? This isn't a history quiz! It's a beauty pageant! 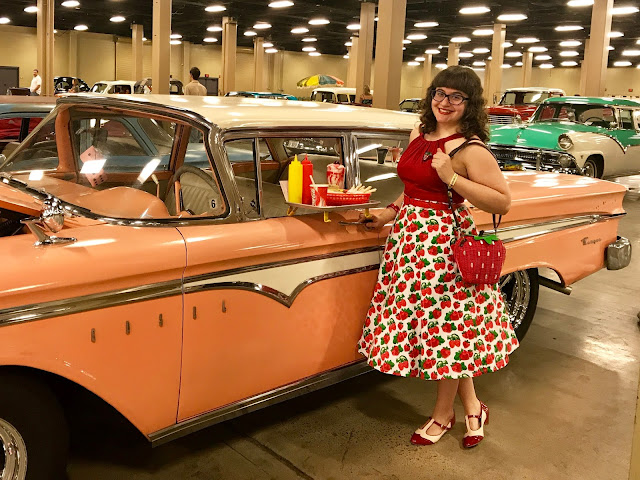 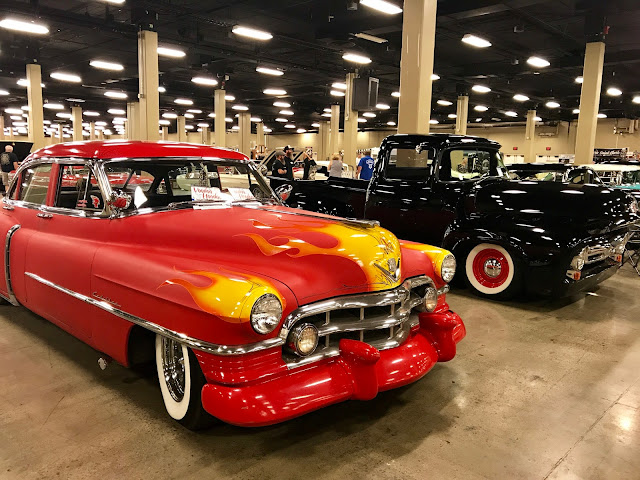 Stupid questions aside, it did make me start to consider entering next year if I decide to make another weekend trip down to Nashville. Now, if I could only get Bristol to do it with me!! 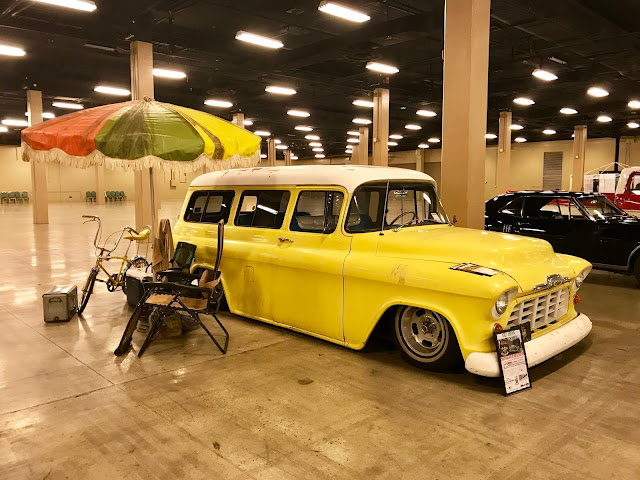 Friday night we went to Broadway Street together to see it at night. All the neon signs were lit up and every bar was PACKED! I am not a fan of the bar scene anywhere but I had to see the famous street all lit up and alive. We went to a dueling piano bar and then hopped in and out of a couple other bars. We were surprised at how small the street was (it felt like only 4-5 blocks) but it was cool regardless! 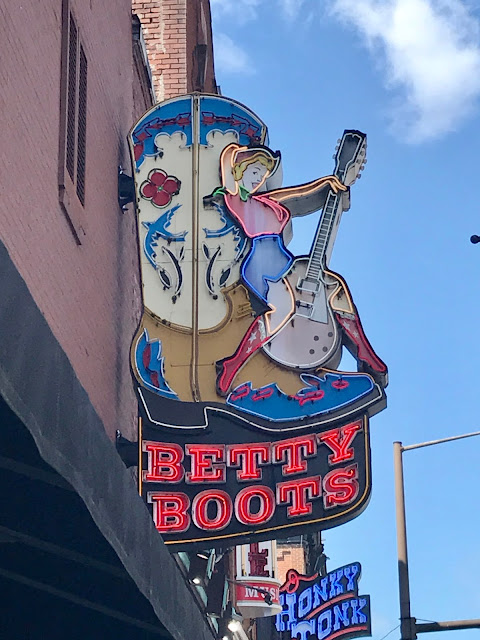 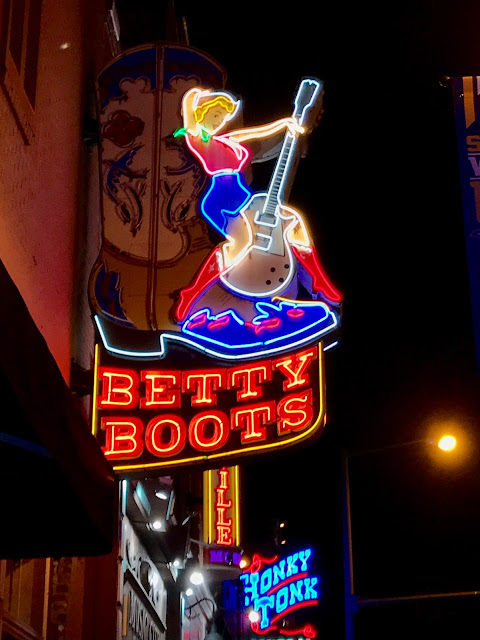 Day vs. Night - such a cool transformation!

The best moment was probably when a bunch of guys started yelling out to Cody, calling him "Ed." I heard them and couldn't believe it. This happens all the time - people ask Cody if anyone has ever told him he looks like Ed Sheeran. It was hilarious though, as they were not sober, and they even asked him for a photo together. Oh it was just ridiculous but insanely amusing. We came home and Cody immediately got a haircut. Ha! 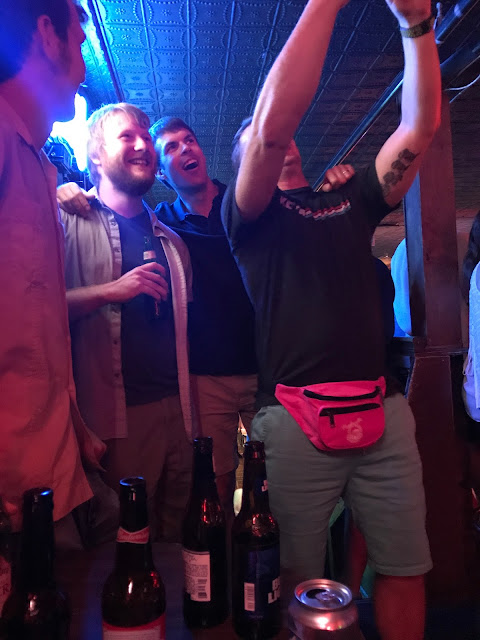 Of course I had to capture it happening real time  - and yes, that dude is wearing a fanny pack!

Saturday may have been my favorite day of the trip. We checked out of the hotel, threw our suitcase in the trunk, and went on a vintage shopping adventure. Not before we went to Five Daughters' Bakery for some donuts. They were a total sugar rush but oh so good! I got a Lemon Icebox donut and Cody immediately chose the King Kong (it had bacon on it!). 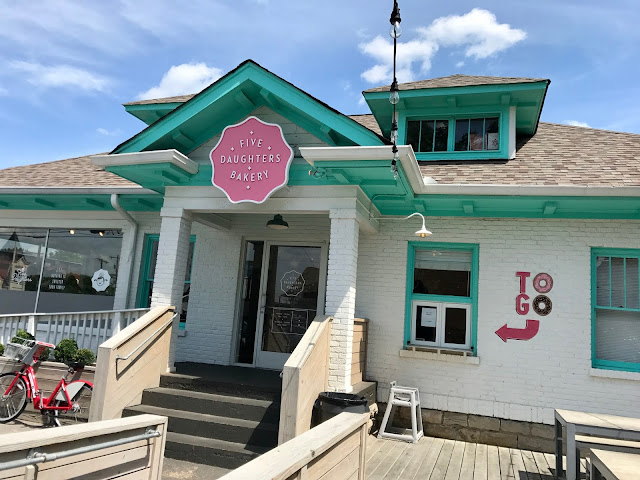 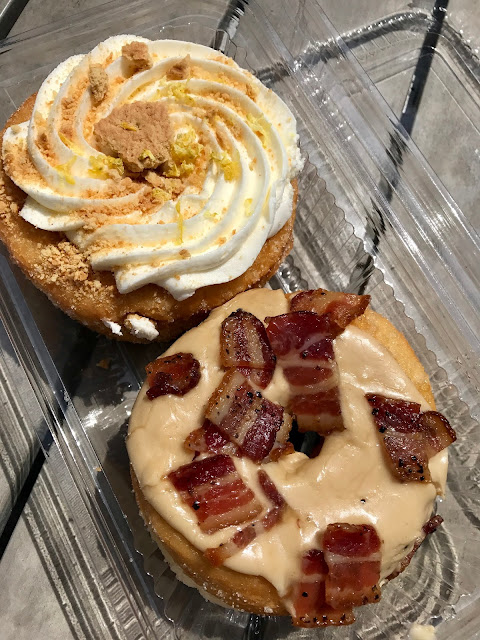 We stopped by Pre to Post Modern after our donut breakfast (such a funky and cool shop!) while the guys went down the street to Gruhn's Vintage Guitars, but really scored big at Hip Zipper. Not only was the gal there extremely fun to talk to and super helpful and informative, but she gave us some other shops to check out before we left. 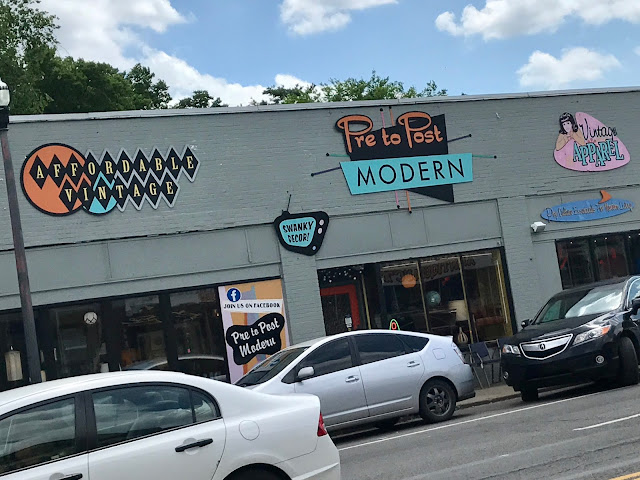 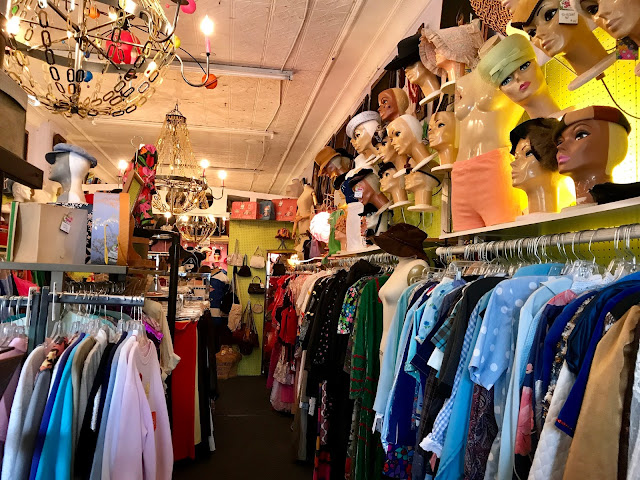 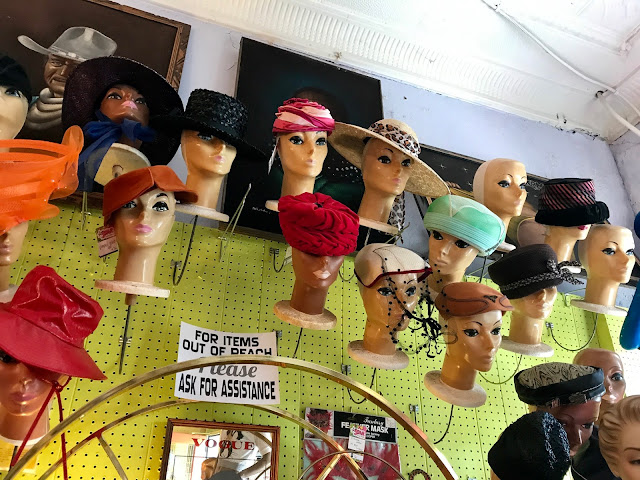 Again, the prices rocked and I grabbed 1 more dress as well as 2 sleeveless button down tops to put under my Collectif dungarees that I have fallen for! Also, Bristol scored her very first vintage dress! It was a magical moment when she opened the fitting room door and I saw her. I am sure she will share on her blog soon so make sure to keep an eye out! 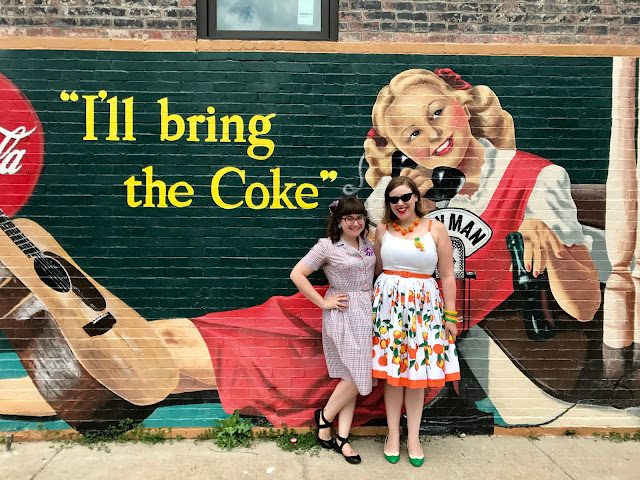 We covered some good ground before Bristol and Bob grabbed an Uber back to the Boogie and Cody and I headed off to the Parthenon on our way to the airport. It was something he really wanted to check out - the only to scale replica of the real thing in Greece - and it was a sight to see for sure! After I snapped some photos for a group of tourists from Canada, they insisted they return the favor and got these cute photos of Cody and me. They make me smile. He is my adventure buddy and I love that he is all for these trips as I am. 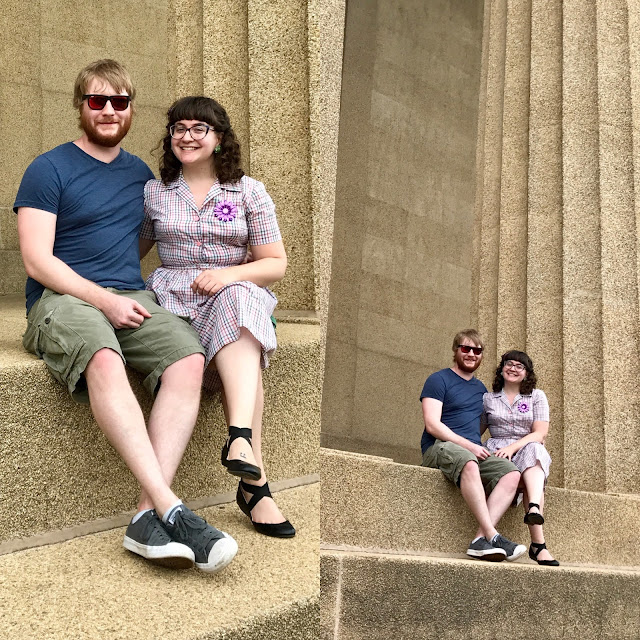 After the Parthenon we headed out to the airport to catch our 7pm flight home. It was a short trip but we find that 3 days is the perfect amount to explore new cities. It helps to know what you want to see and figure out what is near each other. That way you can see the most in your limited time! 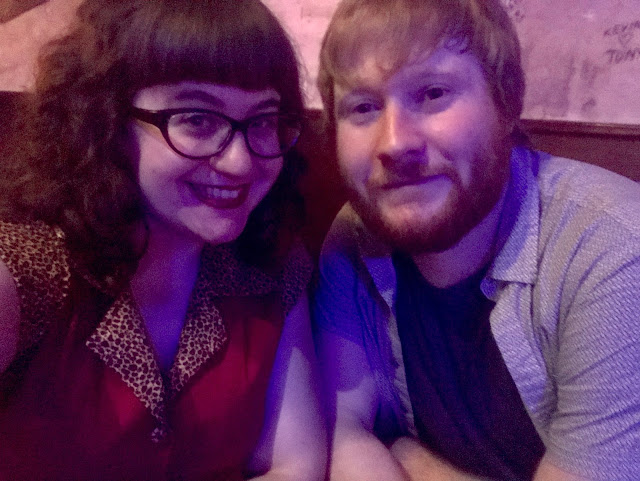 Sorry for the long winded post! It was such a fun trip and we had SO much fun with Bristol and Bob. Bristol and I connect so well and have such similar opinions and interests - as do Cody and Bob! It's just so easy to hang out with them and we value our little reunions so much! 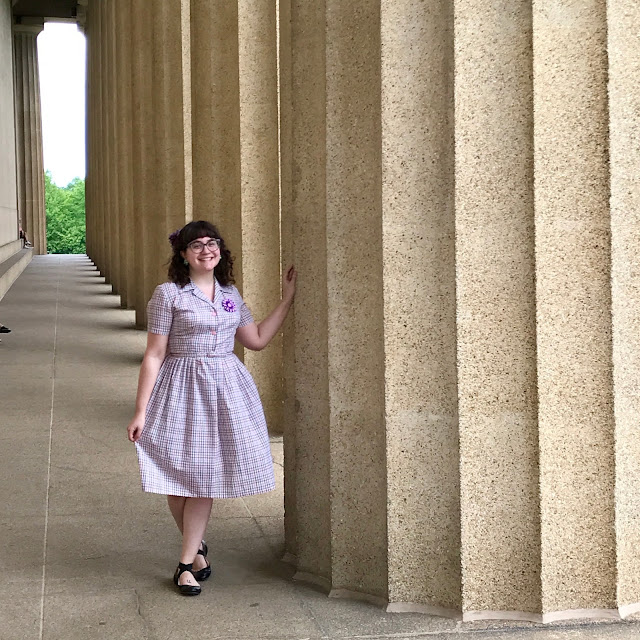