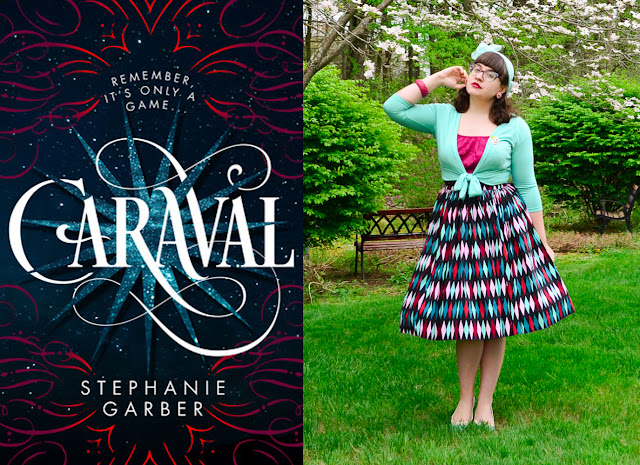 Well, my peanuts, it's mid-May and I just wrapped up my marathon of 3 Las Vegas trade shows in a row. Needless to say, I am POOPED! I ended the marathon with an hour long massage at the spa in the Palazzo before flying back home and let me tell you - it was the BEST IDEA EVER. Especially because right after the massage, I sought out and enjoyed a bowl of chocolate and raspberry truffle gelato. Massages with an ice cream finale need to become a thing - STAT! 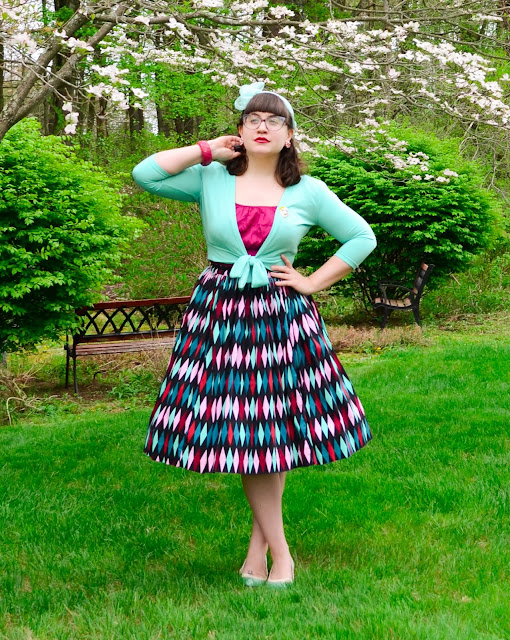 Vegas aside, let's talk this month's BBRBF Book Club read: Caraval by Stephanie Gordon. Be sure to keep an eye on the other club members' blogs for their thoughts and inspired outfits: Helene from Circle Skirts and Petticoats, Kat from The Miss Information Blog, Kristina from Eyre Effect, Noelle from The Classy Junk,  Laci Fay, and Justyna from Hazel & Honey! 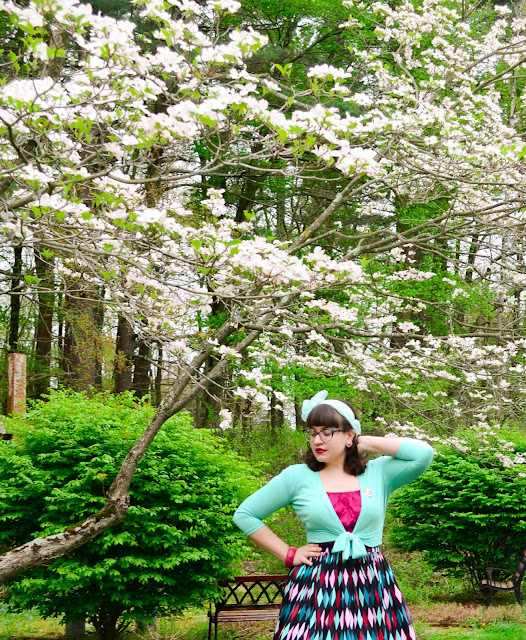 Caraval was on Laci's book list and the story intrigued me big time so it got my vote. A bit like Hunger Games, Caraval follows sisters Scarlett and Tella as they sneak away from their abusive father in order to visit a far away Island where Caraval, a grand and epic game full of magic and riddles takes place over a 5 day period. Scarlett has always wanted to play and now it was her chance. 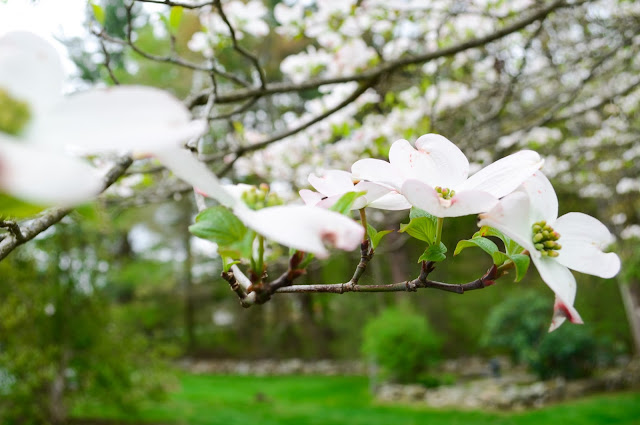 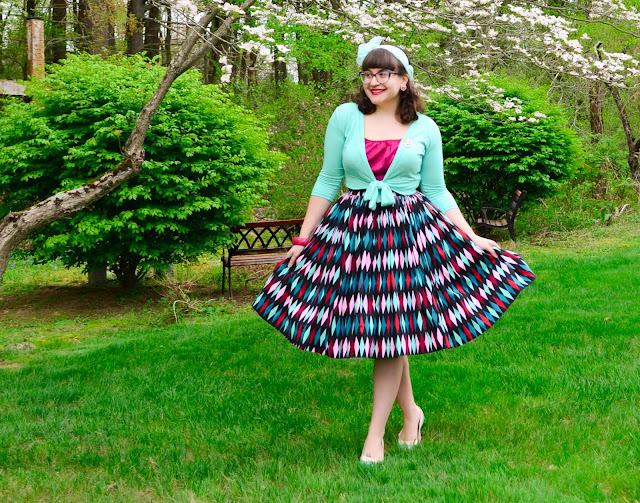 Upon arrival, Tella vanishes (kidnapped by the leader of the game, therefore becoming the focus of the entire challenge) and with the help of the sailor who got them to the island to begin with, Julian, Scarlett is determined to be the one to find her sister and win the game. 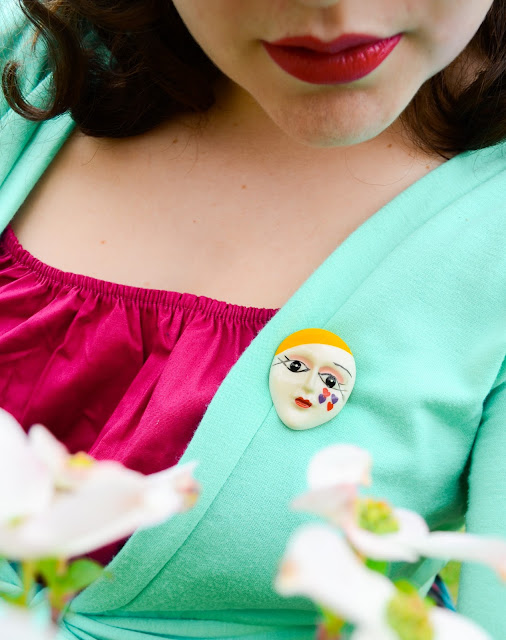 I was so fascinated with the game and the magic it held. The best magical detail? The way Scarlett's attire changed on its own! She wore a magical dress that changed based on her feelings. It sounded beautiful every time it changed - long full gowns with ribbon and bows and lace, oh my! It also changed into nightgowns when it was time to sleep, some of them appearing more risque than Scarlett would prefer. WHERE CAN I GET ME ONE OF THOSE? 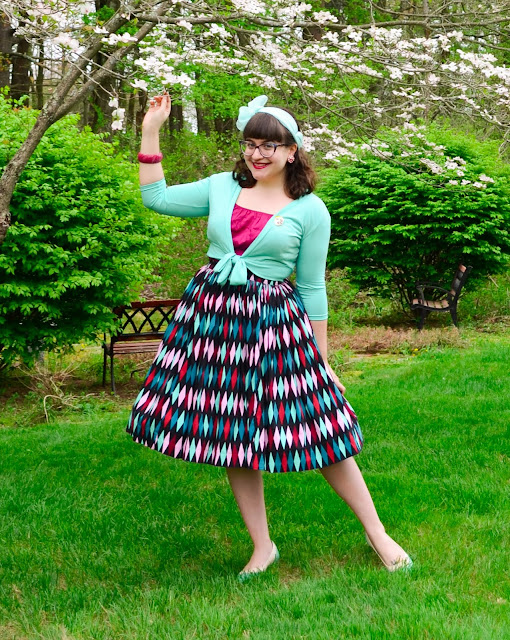 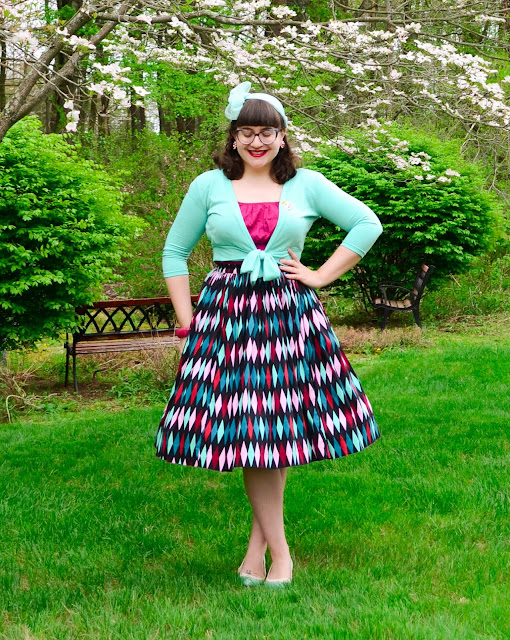 I so hoped the story would bring her close to Julian, who I imagined was sexy as hell from his sarcastic and cocky attitude.  He loved making her uncomfortable, pushing his limits by flirting with her whenever he got a chance and then some. I quite appreciated him! 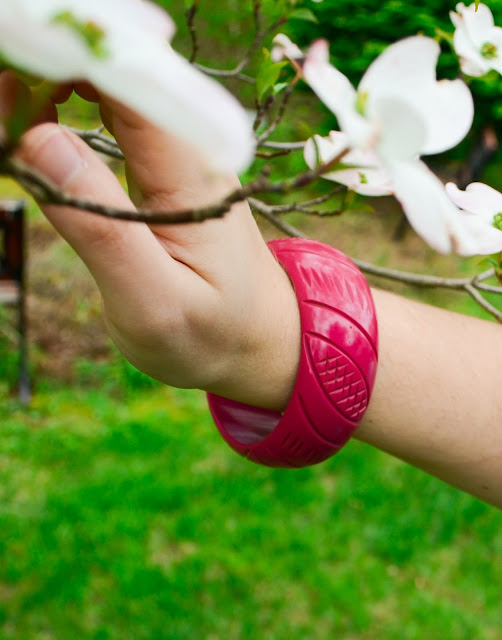 As Scarlett clearly began to fall for him against her wishes, I cheered inside. I cringed and nearly cried as some secrets of his were revealed. I gasped when things got tense. The story may have been fantasy but it was written extremely well and the characters were fantastic. 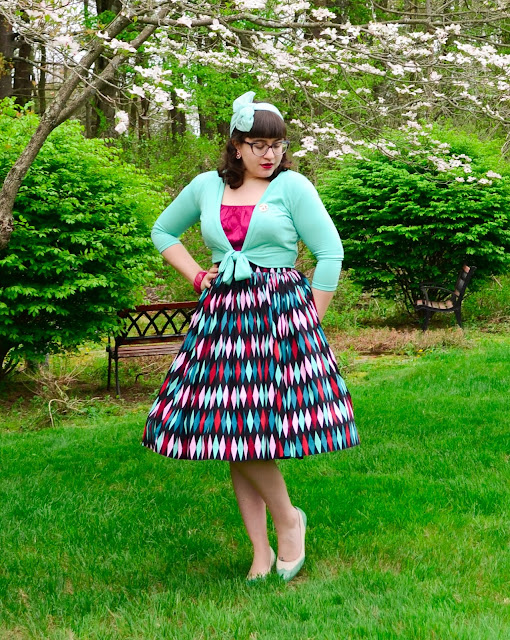 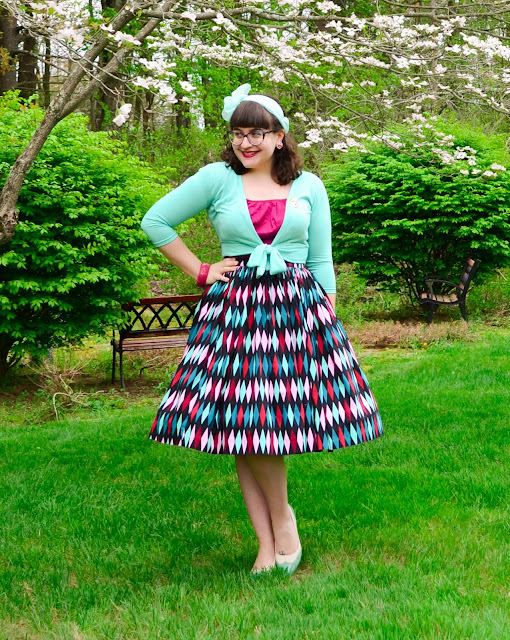 All joking about Julian aside, he was my favorite character. He was complex but at the core, had a mission to support, follow, and help Scarlett and I loved the way he did so. He cared about her starting early on and (I think) decided to protect her from the very beginning - even before their journey began. 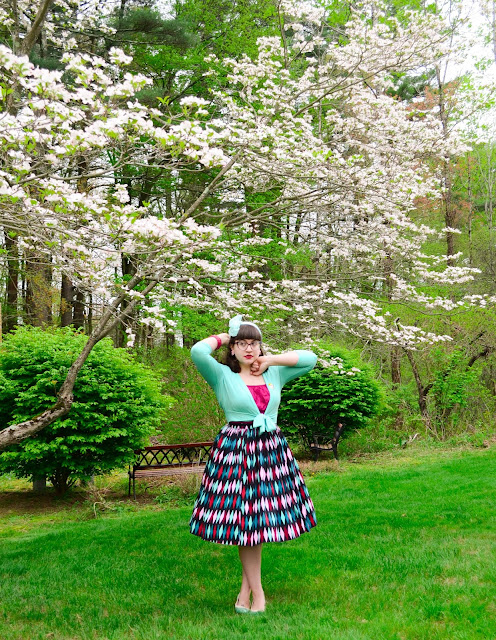 When I saw the cover's colors of teal and ruby red and considered the carnival/game/magical concept, I immediately thought of my harlequin Jenny skirt from Pinup Girl Clothing. I mean really, is there a more appropriate pattern than harlequin to match the foolery and magic of Carnaval? I think not! 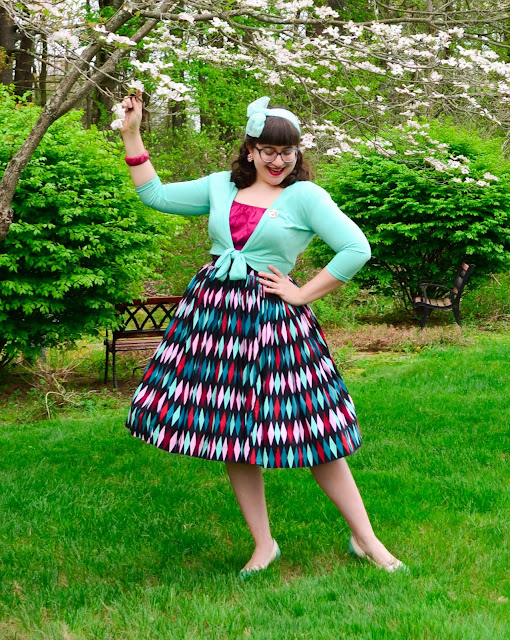 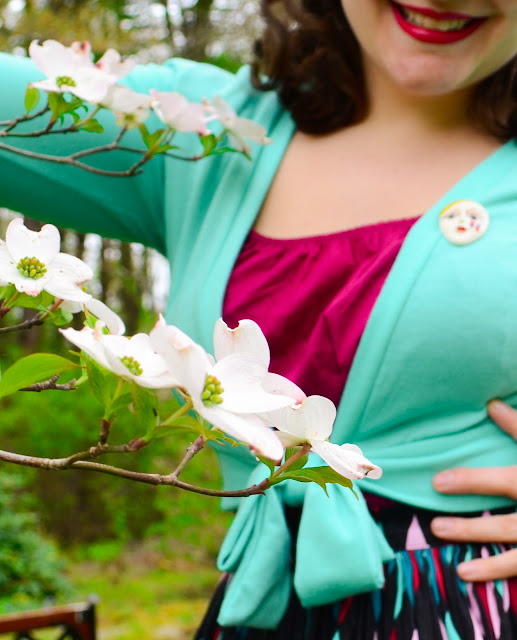 I also thought the brooch was a perfect accessory - the jester mask certainly applies to the trickery of Carnaval as well as the harlequin print of the Jenny skirt! I sure do love me a good theme... 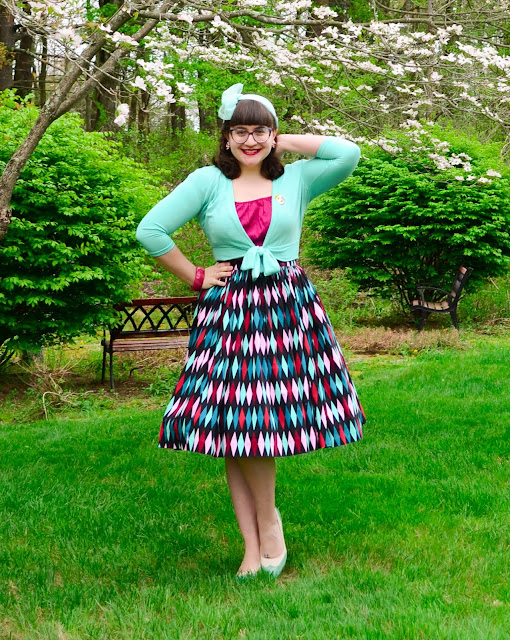 I could go on and on about Caraval - a sign of a good read! - but I'll let you discover more for yourself. If you're not usually into fantasy (like me) but want an easy, exciting, and thrilling read, give this a shot. I read it in its entirety on my flight to Vegas the other week. 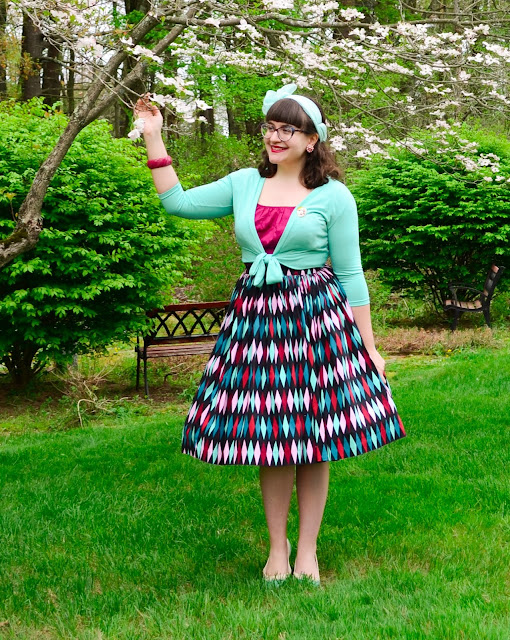 It helped make the trip bearable as I was seated beside the world's biggest frat-boy d-bag and it was slow 6 hour torture. 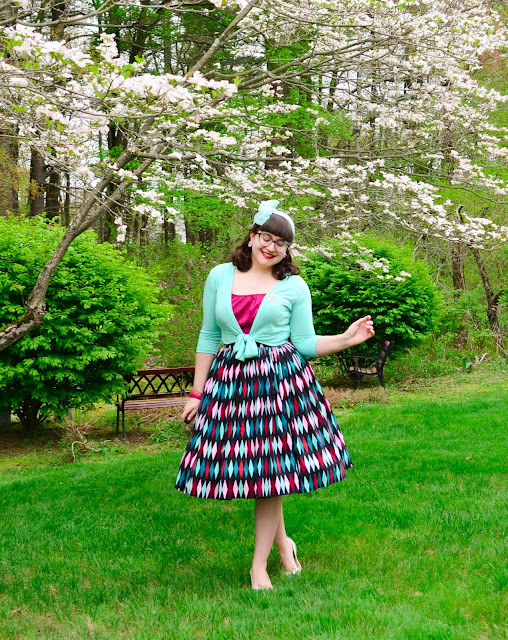 Next month we're reading Lillian Boxfish Takes a Walk by Kathleen Rooney so stay tuned in June for another review or even better - read along and share your thoughts with us! We're a lot of fun, I promise...
Posted by SaraLily at 8:00 PM