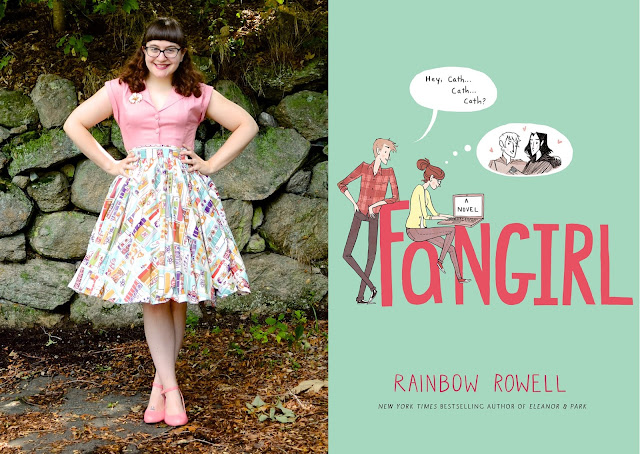 Hey, it's BBRBF Book Club Day! Before we dive into this month's read, "Fangirl" by Rainbow Rowell, I have some new members to introduce! First, like every month, don't forget to check out Kristina, Noelle, and Lyndsey's take on this read! But also, we were thrilled to welcome two new members! This month we have Kathrine aka Miss Information as well as Helen from Circle Skirts and Petticoats! We are now a gang of 6 book lovin' gals and it's super exciting to see the book club grow! 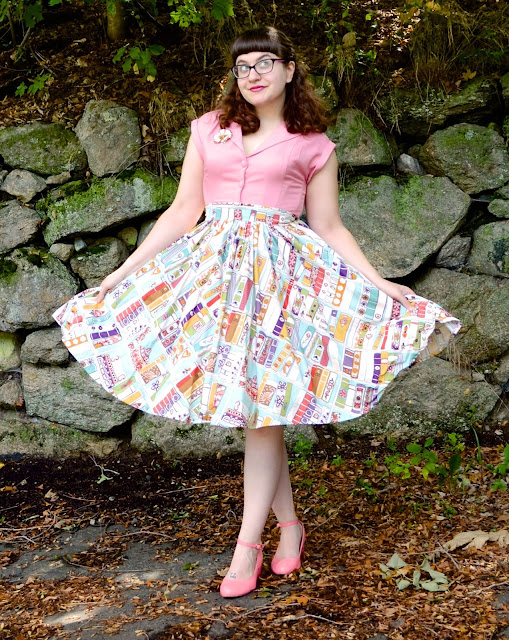 Please don't hesitate to tell one of us if you're interested in joining us! We'd love for you to read along and show us your interpretations with style! Plus, we tend to wander off into tangents when we start chatting - tangents that may include a girly debate over which version of the TV show, Being Human, is better (pssst, it's the US version! It has Sam Huntington in it, need I say more? Look him up and you decide). 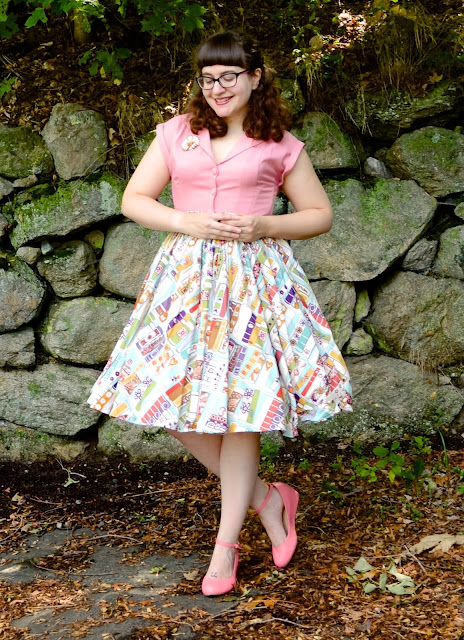 This month we dove into "Fangirl" by Rainbow Rowell. This story, with the protagonist, Cath, being a writer, practically begged me to wear my book skirt itself so I obliged and paired it with one of my new Banned Apparel tops I bought from Unique Vintage this summer. 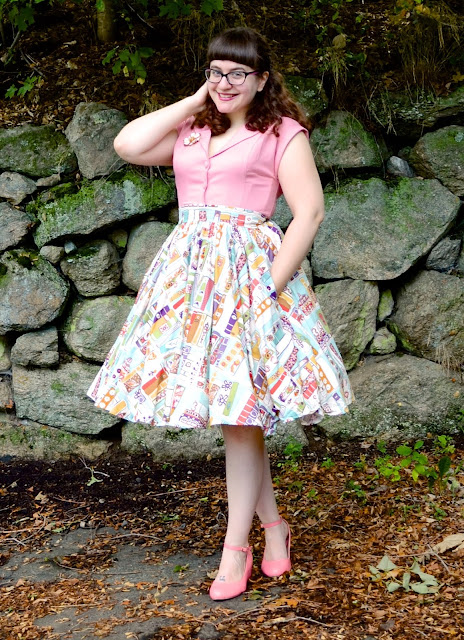 A bunch of us in the club were already fans of Rainbow Rowell when Lyndsey suggested we give "Fangirl" a read. I loved "Eleanor and Park" and "Attachments," and really enjoyed "Landline" so I was jazzed to read another gem from Rainbow Rowell. 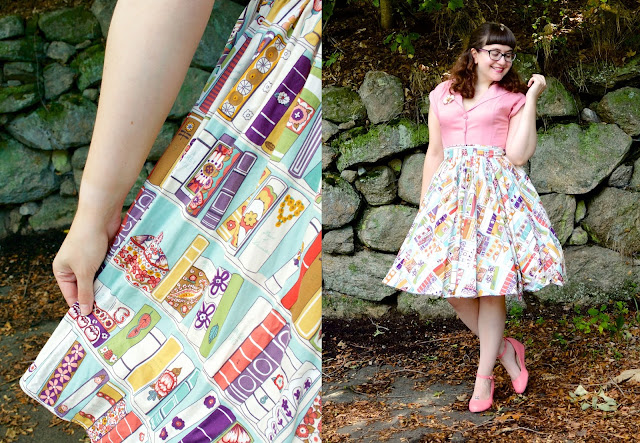 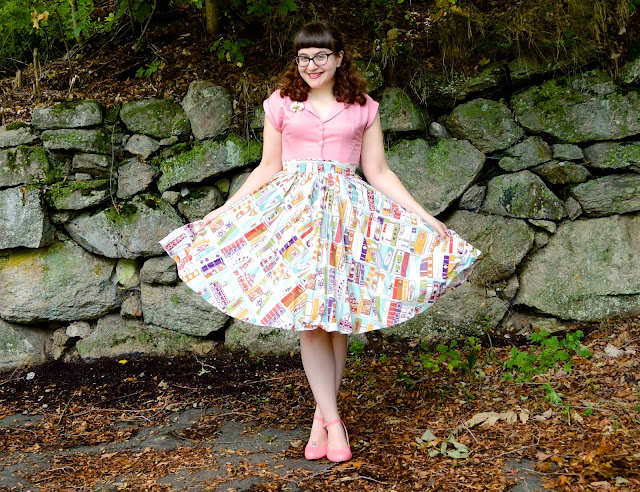 As I started it, it became clear to me that this was loosely based off Harry Potter fans somehow. I don't know the full story behind this novel but that kinda bummed me out. I have never read Harry Potter and have no interest in Harry Potter so reading a book about fan fiction about a book that sounds like Harry Potter....kind of a downer. Did that statement even make sense? 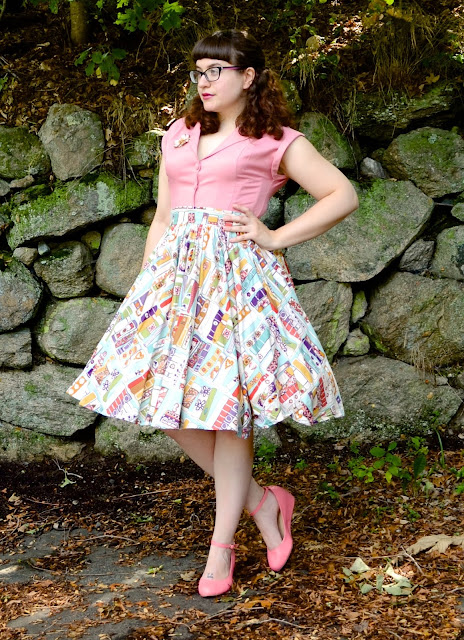 Anyway, I wasn't going to let that sway me. That wouldn't be fair. Putting my personal feelings on fantasy books aside, I dove in and I actually felt a connection to Cath. For one thing, we're both writers. Like Cath, I spent all my free time growing up writing and even had my fun with fan fiction. In middle school, I wrote fan fiction for the TV show, Smallville (Lex/Lana shipper over here, heeeyyyy!), and while my fanbase didn't reach the thousands like Cath, I did get a small following and received some attention in the message boards. Nerdy, right? 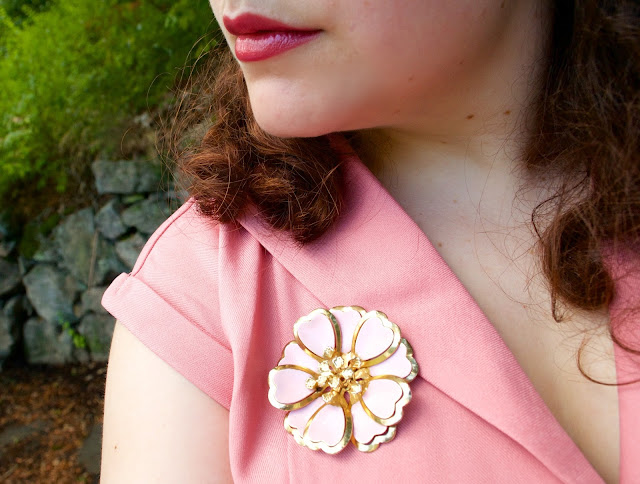 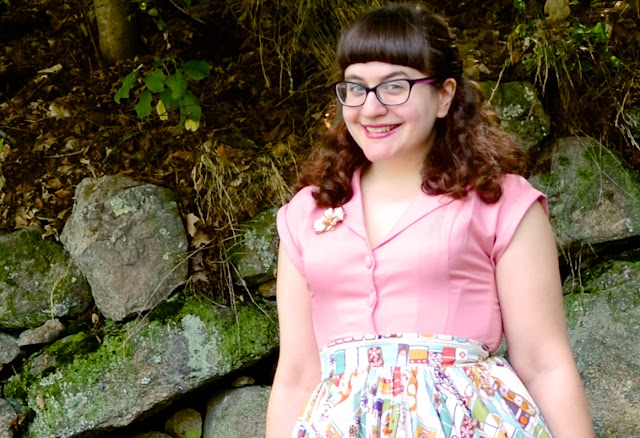 Still, one thing that I found interesting is that I did all that in middle school. Cath is entering college. I outgrew the fan fiction obsession after middle school - is it mean to say I grew up? Cath comes off immature to me because of this and maybe she's supposed to. Then again, though, she reminded me of SO MANY girls I knew in college who LIVED AND BREATHED Twilight. They wore Twilight tee shirts everyday, had Edward posters on their dorm walls, and probably enjoyed a fan fiction piece or two in their downtime. So I guess I get it. By the way, I've never read a word of Twilight either. No, thanks! 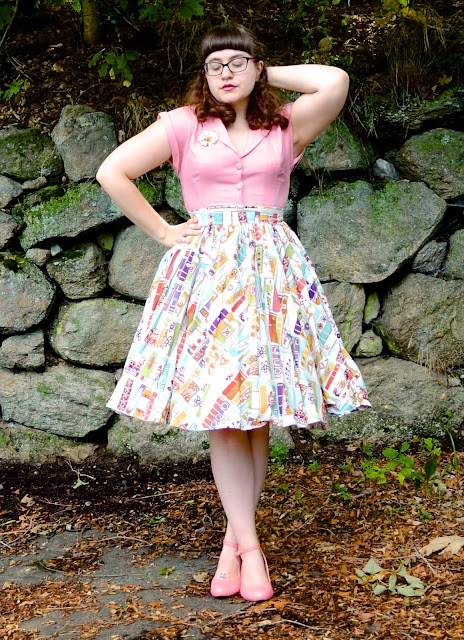 That aside, I liked that like me, Catch was in school for writing (though her behavior around refusing to write anything but fan fiction - even going as far as not turning in her final project because she didn't want to do it - got to be SO annoying - how old is she again?) and was a total book nerd. I also really liked that like me, she felt awkward and anxious in social situations, wasn't jumping into bed with the first guy she saw (and even took it slow with the guy she DID like), and she generally stayed away from drinking and the whole party scene. 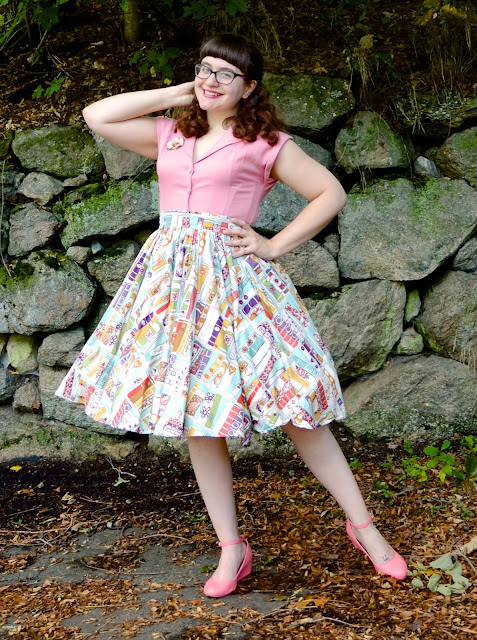 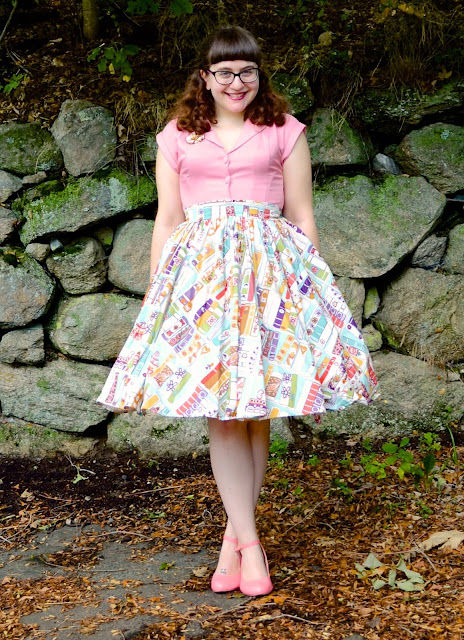 As the story went on, I loved the cadence between Cath and Levi. They become friends and form quite the cute relationship - he always shows up to walk her home when she leaves the library late at night and I loved that. It's such a sweet thing to do. But I gotta say (spoiler alert!), their first kiss is SKETCHY AF. I mean, they have been reading together on her bed and they're all sleepy. Then she is LITERALLY falling asleep when he kisses her. It's a bit...rapey. If you kiss a girl who is more or less sleeping...doesn't that make it a bit sketchy? It felt sketchy. Much more sketchy than cute or romantic. 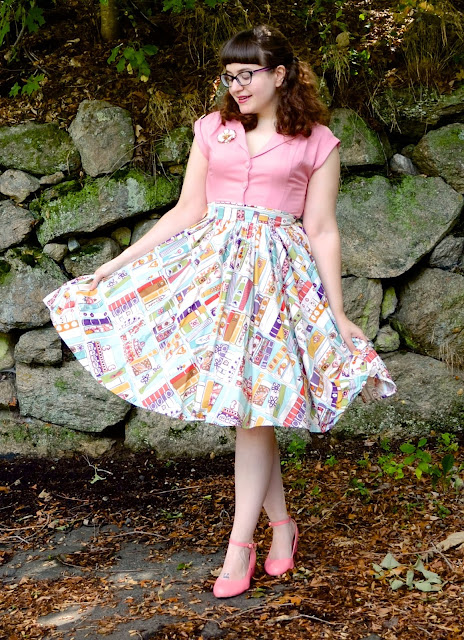 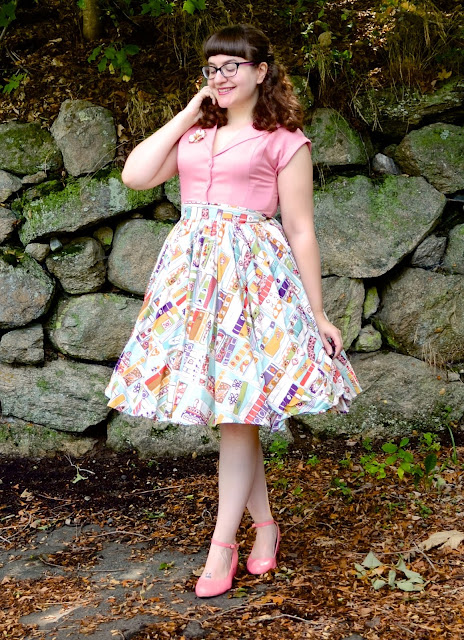 Or perhaps I am getting too old for young adult novels. I used to love them and never read anything but young adult. Lately, I am getting the sense that I am over the coming of age stories (as well as the whole cliche love/drama of "two people clearly like each other but won't admit it, then they finally admit it and have a big romantic moment, but then the second it's all going so well a big conflict occurs and ruins it! Oh now we must turmoil for chapters on end and then finally they reunite, work it out, and queue the cheesy ending!"). Perhaps I am looking for more relatable and realistic fiction of someone my age. YOU GUYZ, AM I GETTING OLD AND BORING?? 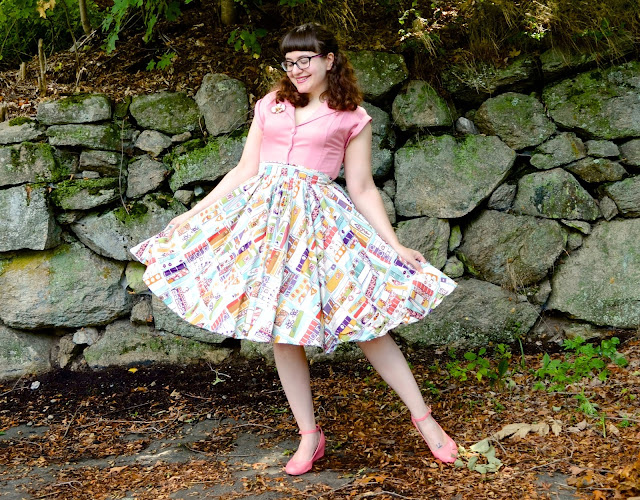 Perhaps I am a harsh critic. I don't mean to come across that way or to say that I didn't like the book. I did like the book, I liked the story, and I did like Cath. I bet we'd even be friends if we went to the same college. I just don't know if we'd bond when it came to our reading/writing preferences. 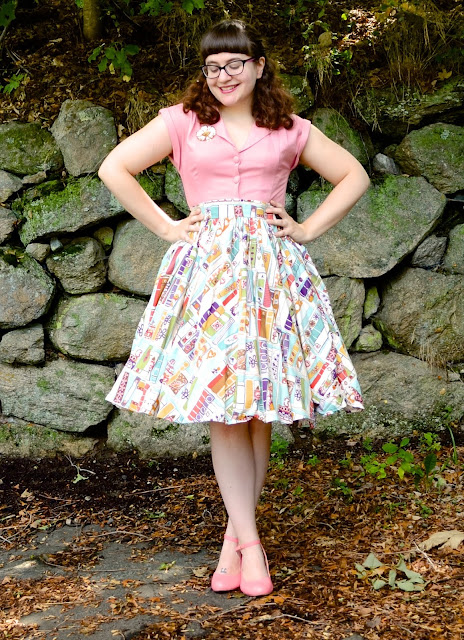 If you want to read along in September, our  next book will be We Are Pirates by Daniel Handlers!
Posted by SaraLily at 10:00 AM