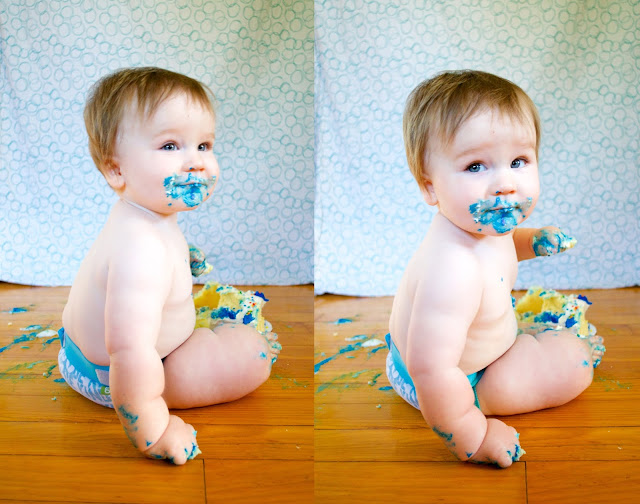 A couple weeks ago I met up with one of my favorite families to photograph their littlest celebrate his first birthday the fun way - with a cake smash photo shoot! Not familiar with what a cake smash is? It's when you introduce your baby to cake for the first time in honor of their first birthday - with a photographer present to capture the experience.

I photographed them a lot when I worked in the studio and I so miss them! They're so fun! It can go one of two ways, really. The baby can either dive in without abandon and totally love every bite or the baby will take one lick of the stuff and totally despise how it feels on its fingers and lips and throw a fit. I've experienced both situations. 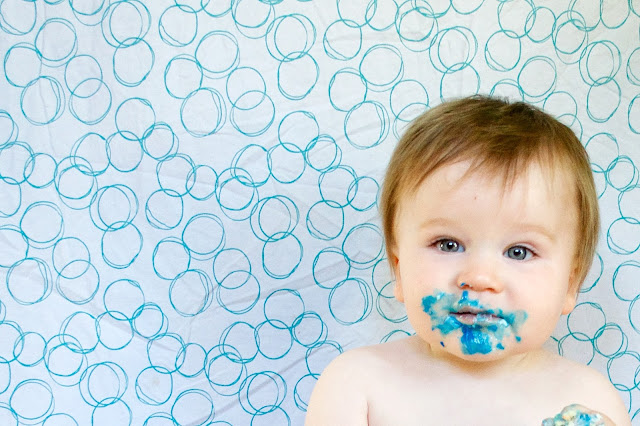 Both can actually produce some pretty awesome portraits...

Daniel did not let us down, though! He was hesitant at first ("I mean, what IS this brightly colored squishy thing you put in front of me, Mom and Dad?") but once he got a taste of that sweet frosting, he reached for more...and more... 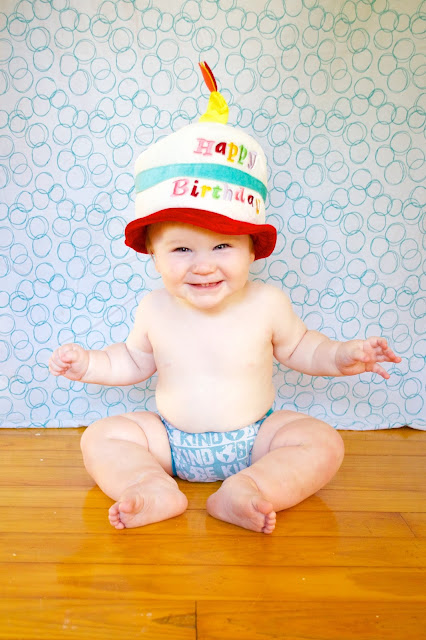 It's so great to see how far Daniel and his family have come in a year. I photographed Daniel when he was only a month or so old along with his super adorable siblings last fall and was super excited to photograph him now, one year later. He's got your typical Gerber baby looks with Michelin man arm and leg rolls to boot! 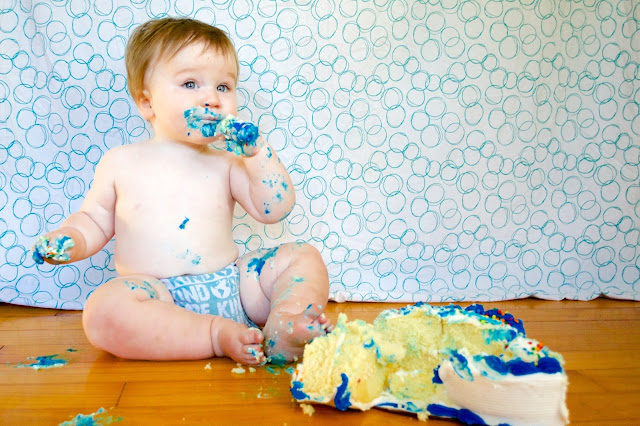 Don't you just want to eat him up? 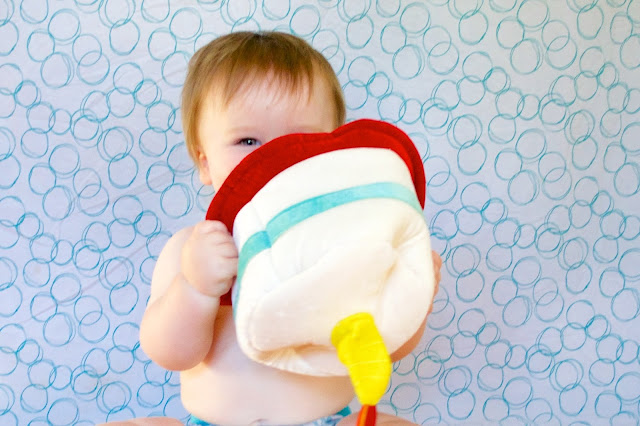 This kid's got quite the team of cheerleaders. While he took his time checking out the cake and all its sugary-ness, his big sis and bro, Delaney and David, cheered him on. The more mess he made all over himself, the more Delaney and David giggled and encouraged him to mess it up even more. 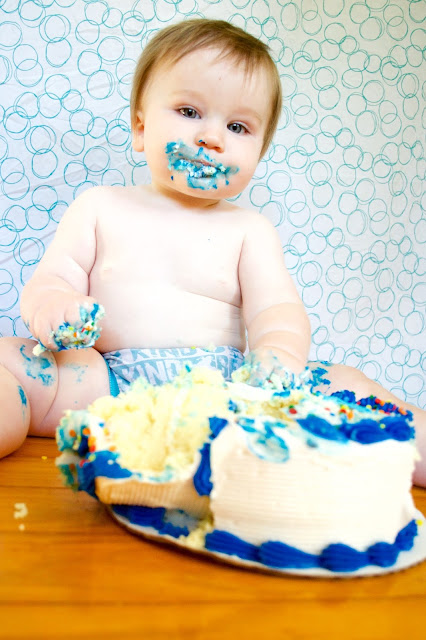 I had to laugh at a comment big sis Delaney made the moment Daniel's foot touched down in the middle of the broken apart cake. She gasped and softly said, "Oh darn. I wanted a piece of that cake..." 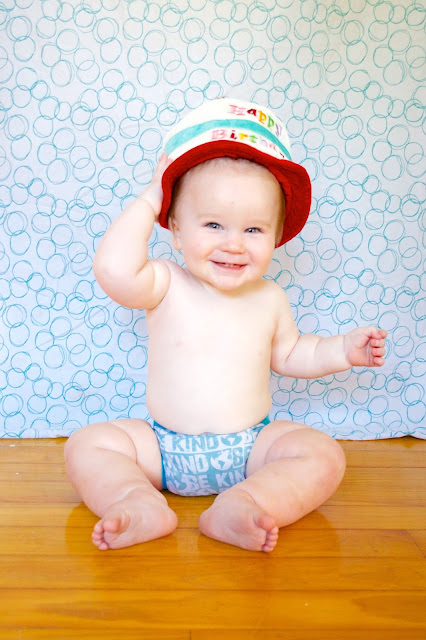 I hate to break it to you, Delaney, but when there is a cake smash, there is seldom much left to truly enjoy ourselves. Baby wears most of it when done right! 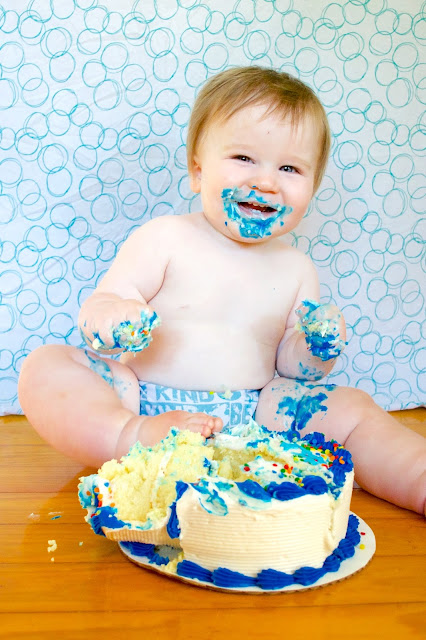 I'd say all in all, Daniel handled the cake smash very well. He had plenty of giggles, lots of curiosity, and made sure to trail the frosting around the room as he crawled right toward Mommy.

"Frosting hug, anyone?" he seemed to be asking. 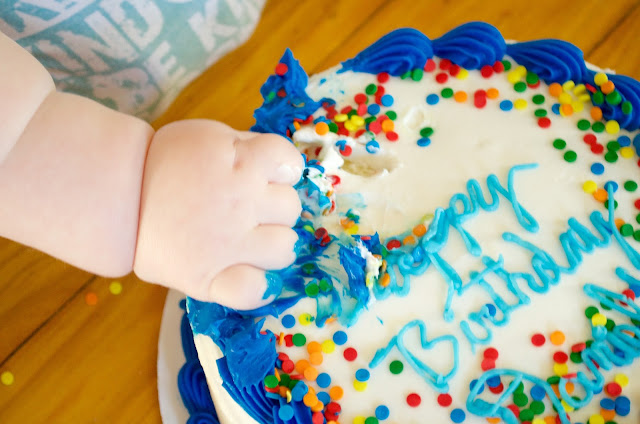 No, Daniel, we will pass! 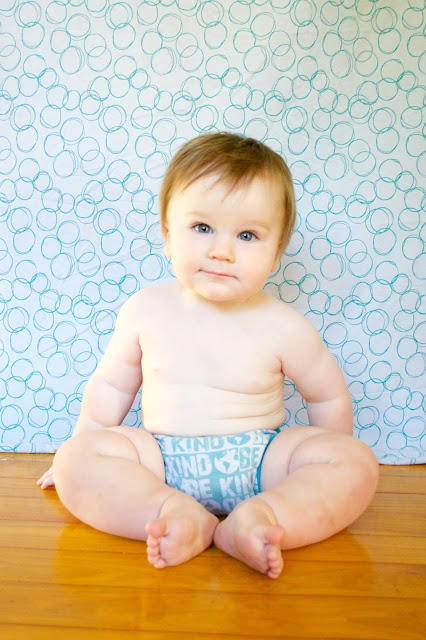