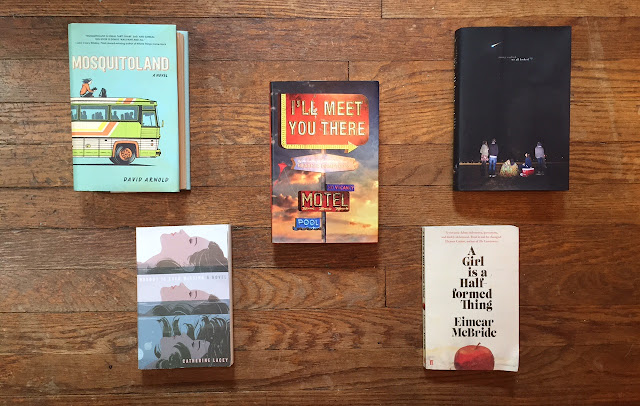 Is this blog post deja vu? Heck no, it's just time for June's edition of "What's Sara Reading?" and I've got some goodies for you today! I've had my pick of reads in the past month, mostly thanks to my Insta pal, Jessie, who proposed a book swap recently. Oh did we swap! I sent her 4 reads and she sent 4 right back - along with some other awesome goodies. Have I mentioned how much I love my Insta friends? I really do. I have met so many great gals on Instagram.

People think I'm crazy when I try to explain how many friends I've made on social media platforms like Instagram but it's not crazy! I really have! It can be such a community full of support, encouragement, and enjoyment (aka love for adorable dresses).

So anyway, with Jessie's contributions added onto my usual book splurge off Amazon (ugh, Amazon, why can't I quit you?), I had quite a pile to pick from this month. I still have some left over for next month! Can't have too many books, right?

1. Mosquitoland by David Arnold
I ate this book up as quickly as a mosquito eats up my ankles at night. Sorry, I had to make a mosquito joke. Why wouldn't I? Anyway, I didn't know what to expect when I started this one but by the time I was three chapters in, I was pulled in. I was so glad it was a chunky book - I didn't want to reach the end. The story follows Mim as she finds her way to Ohio from Mississippi on her own - whether it be by bus or by hitching rides. Her mom is sick and she is determined to be by her side. All the situations she gets herself in and folks she meets along the way are what make this story so great. I loved it!

2. I'll Meet You There by Heather Demetrios
This was another one that started off with an "I'm not sure" feeling. It did come off as your typical YA read about a gal, Skylar, from a rundown home town with big dreams but it ended up becoming a bit more than that. The story also focuses on Josh, a soldier returning from war, and follows his relationship with Skylar as they find solace in each other during their struggles. Definitely something I don't typically gravitate toward but I really enjoyed it.

3. We All Looked Up by Tommy Wallach
If you want a typical, easy, good YA read, this one is for you. Told in various POVs of high school students as they face an impending meteor strike that will end life as they know it, the story hops along and keeps you moving with it. Some of it was bordering on cliche and was a bit far-fetched but I don't really mind cliche. It had some great characters and came together in the end pretty well. I also hear there is an actual soundtrack for it by the author, which is pretty darn cool to me! I will have to see if I can find it and take a listen.

4. Nobody is Ever Missing by Catherine Lacey
This book frustrated me. It just did. While my heart ached for Elyria, who as an adult still struggled with her adopted sister's suicide when they were in college, it just didn't evolve. It was intriguing to follow her as she escaped her life and traveled around New Zealand, but it felt unresolved when it ended. It sort of didn't end, if that makes any sense - and not in the "ooooh a cliff hanger" way. I guess you'd say I felt as though it was a bit anti-climactic.

5. A Girl is a Half Formed Thing by Eimear McBride
This one is tough to explain. Written very informally in a young girl's mind (sort of like a stream of consciousness), you definitely have to focus as you read about her life. Following her struggles having a brother with a brain tumor combined with her budding sexuality as she becomes a teenager, this book definitely gets heavy. I didn't struggle too much with the writing. I definitely had to re-read some bits here and there but for the most part, I could follow what she was saying and knew what she was experiencing. Definitely not a breezy read for the beach!