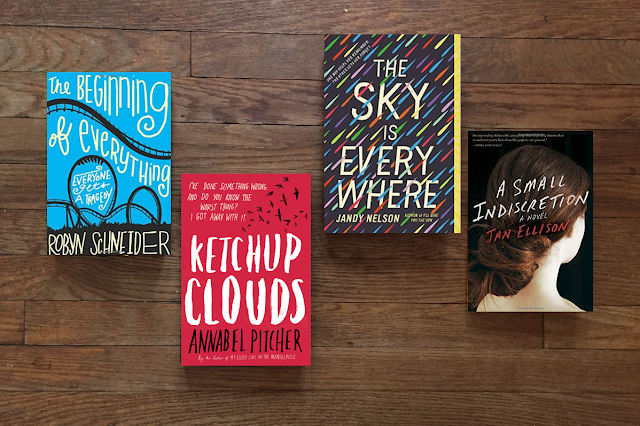 With all the traveling I did between April and May, you'd think I would have gotten more reading done. I suppose I did (I finished one book below on one flight alone!) but when I see this month's round up, it doesn't seem so impressive. I feel like I read more, though, and I suppose that is what matters most!

I also just received a big box full of tasty new reads from a friend off Instagram and I can't wait to dive into those soon! Is there anything better than pen pals who share your taste in books? I think not! I sent her one or two of the ones below right back.

How is May shaping up for you? I am always exhausted by May's end. May and October seem to be the busiest months for my company. In early May, our annual conference happens in Vegas (see my post on this year's EMC World here!) so everyone is hard at work making it a success. Then, even though we all get a chance to breathe post-show, I seem to always have a lot of personal stuff going on in May due to Mother's Day and both my sisters' birthdays happening in May.

As for October, I don't actually know why it's always so busy, but it is! It tends to be a month full of busy weekends and nights. At least it's busy on a personal side? Hmm...

Anyway, business aside, let's dive into this month's reads, shall we?

1. Ketchup Clouds by Annabel Pitcher
Such an interesting story - the book is written in the form of letters that "Zoe" writes to a man in jail. I put Zoe in quotes because from the start, she warns that she is not using her real name. She starts writing to a man on death row as part of a pen pal program but uses her letters to him as her confession as she begins to tell him the story of how a recent death was her fault. There really is so much more to it than that but you get to find out each detail as slowly as the inmate does with each and every letter.

2. The Sky is Everywhere by Jandy Nelson
This is the book I devoured on one flight. It was the first leg of my flight to Vegas for NAB back in April. One reason I read it so fast was because it is just one of those easy reads that you can fly through in 4 hours or so if you're, you know, stuck on a plane without a TV in the seat in front of you or something. The other reason I could read the whole thing in one sitting? Upon reading page one, I realized that I had definitely read the book before. Not only that but I still had my original copy in my book shelf at home! As I sat there, I could even picture it. I was a bit annoyed but more amused. They had clearly updated the book with a new cover. I didn't even realize I was buying a book I had already owned! Luckily, it's a fantastic book so I didn't mind reading it again. The story is a bit heavy as it is about a girl mourning the death of her older sister but the characters are so wonderful. It's worth it for the characters.

3. A Small Indiscretion by Jan Ellison
This book took awhile to get through. It was lengthy but also pretty heavy. It was extremely well written, though, as so many threads and paths tied together so ingeniously by the end. I LOVE it when a book does that! I finish and think, "What? How? HOW?" I always envy writers with such skill. At the core of it, this book is about a woman whose son is in a coma after a car accident. She is writing to him, telling him the story of her life starting when she was 19 and living in London, leading up to the events of his accident. The twists and turns that occur throughout will definitely keep you enthralled!

4. The Beginning of Everything by Robyn Schneider
I just finished this book on my flight home from EMC World. It's focused on Ezra after a car accident that left him "crippled" and unable to play tennis any longer. When he is thrown from his popular jock normal life, he starts to see the beauty in a different life - as well as falling for the mysterious new girl. This was another story that surprised me multiple times with how things came together. Damn these talented writers! Cody teases me because I never see what's coming in shows/movies/books and he does (how does he KNOW??) but I love that. I like discovering things as they happen, feeling that jump in my chest when something surprises me, and so on. It's so thrilling!!
Posted by SaraLily at 10:00 AM