Little American Girl in Dubai: Shopping at the Souk (2 of 3) 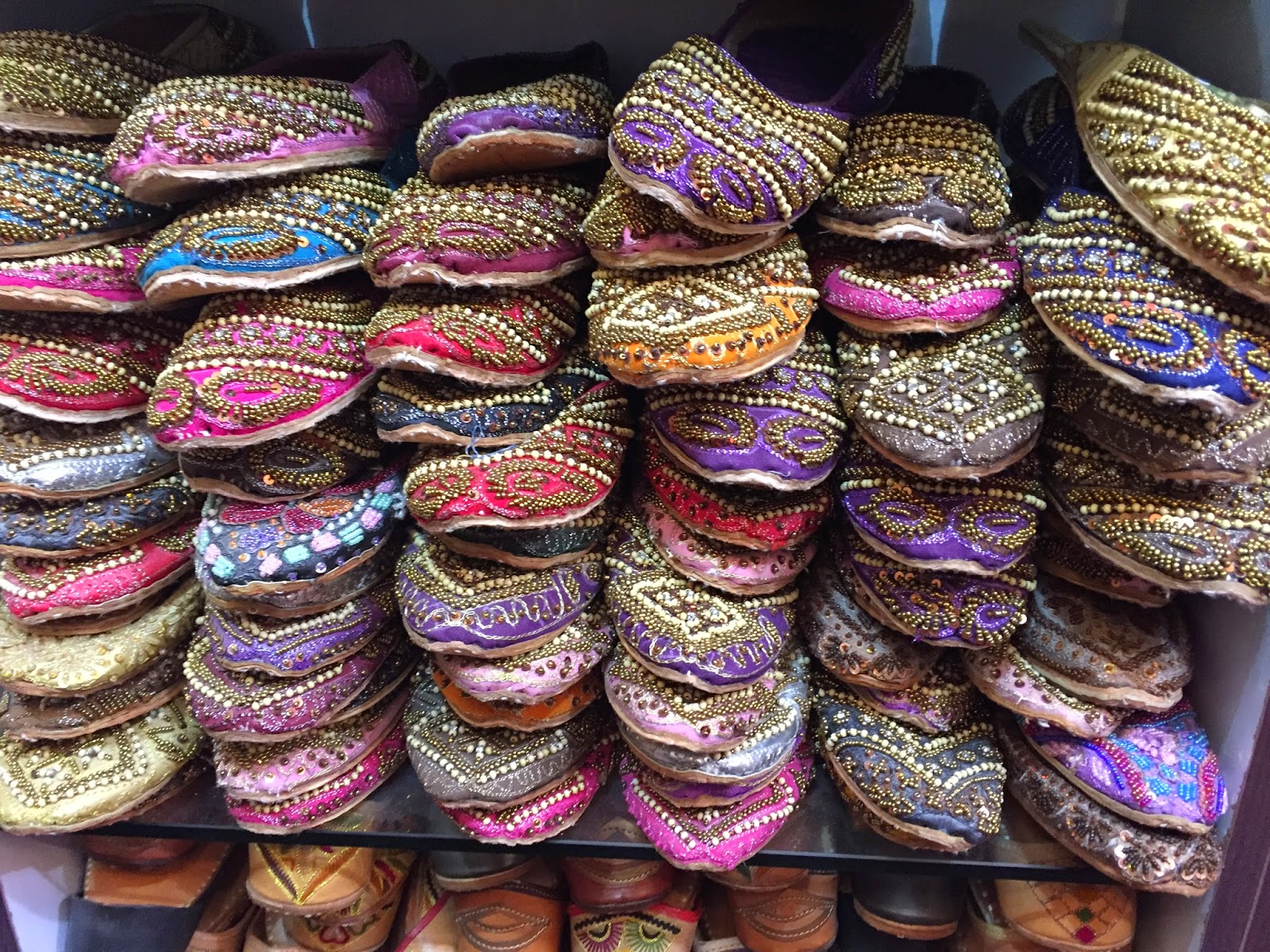 On my first day in Dubai, I didn't have much to do as the CABSAT tradeshow didn't open for another day. After a late and long breakfast at the hotel, we all headed over to the exhibit hall to check on the progress of the booth build and sign off on some last minute paper work for AV and furniture and all that good stuff.

We were only needed there for a couple hours - the rest of the day was ours to roam! Kristana, our manager on site, is a huge travel bug and it was awesome having her there. She was great at suggesting things to see and places to go.

On Monday, once we were free from the construction site that would soon be a lively tradeshow floor, we decided to hop into a cab and head to the Souk. 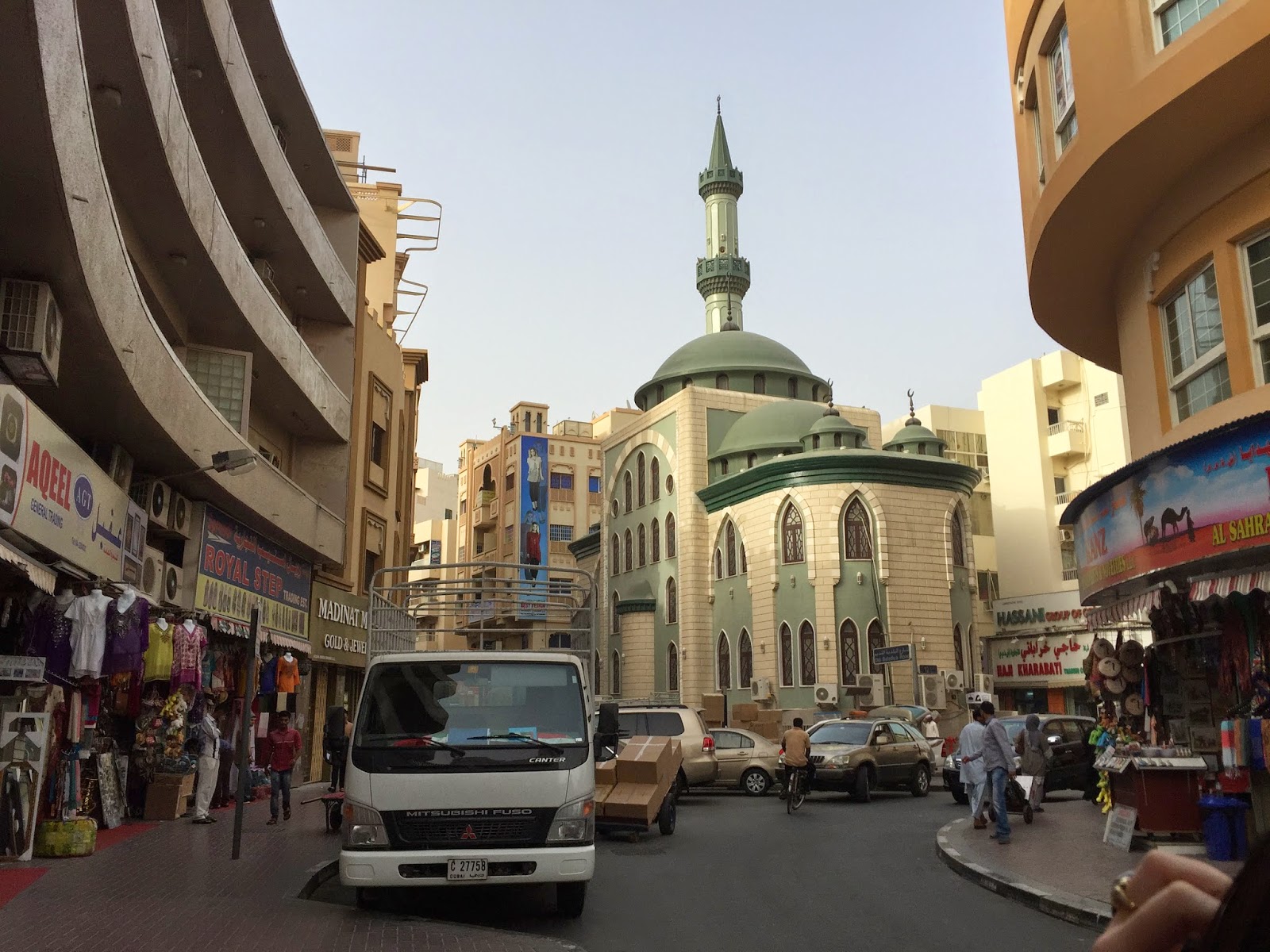 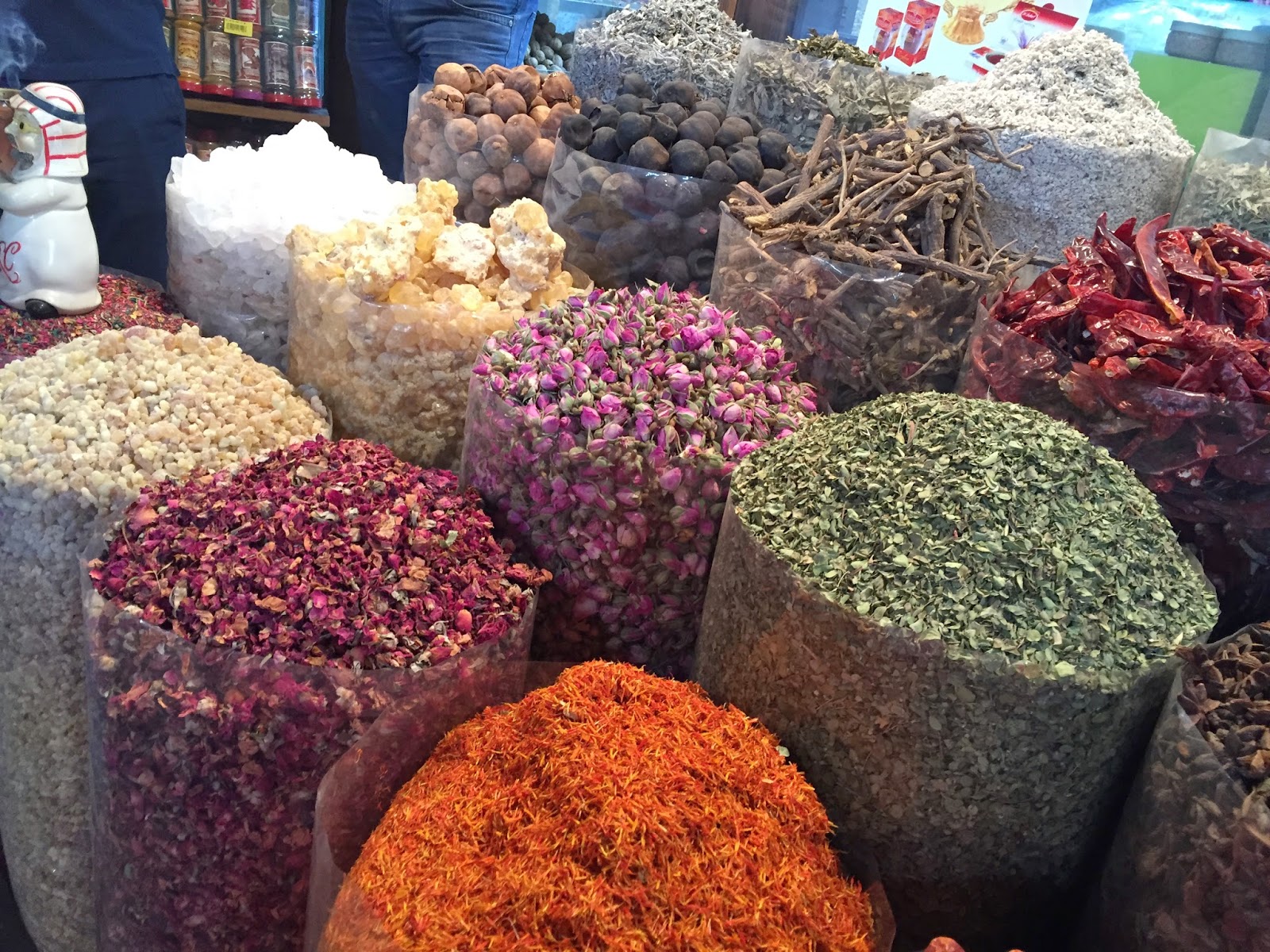 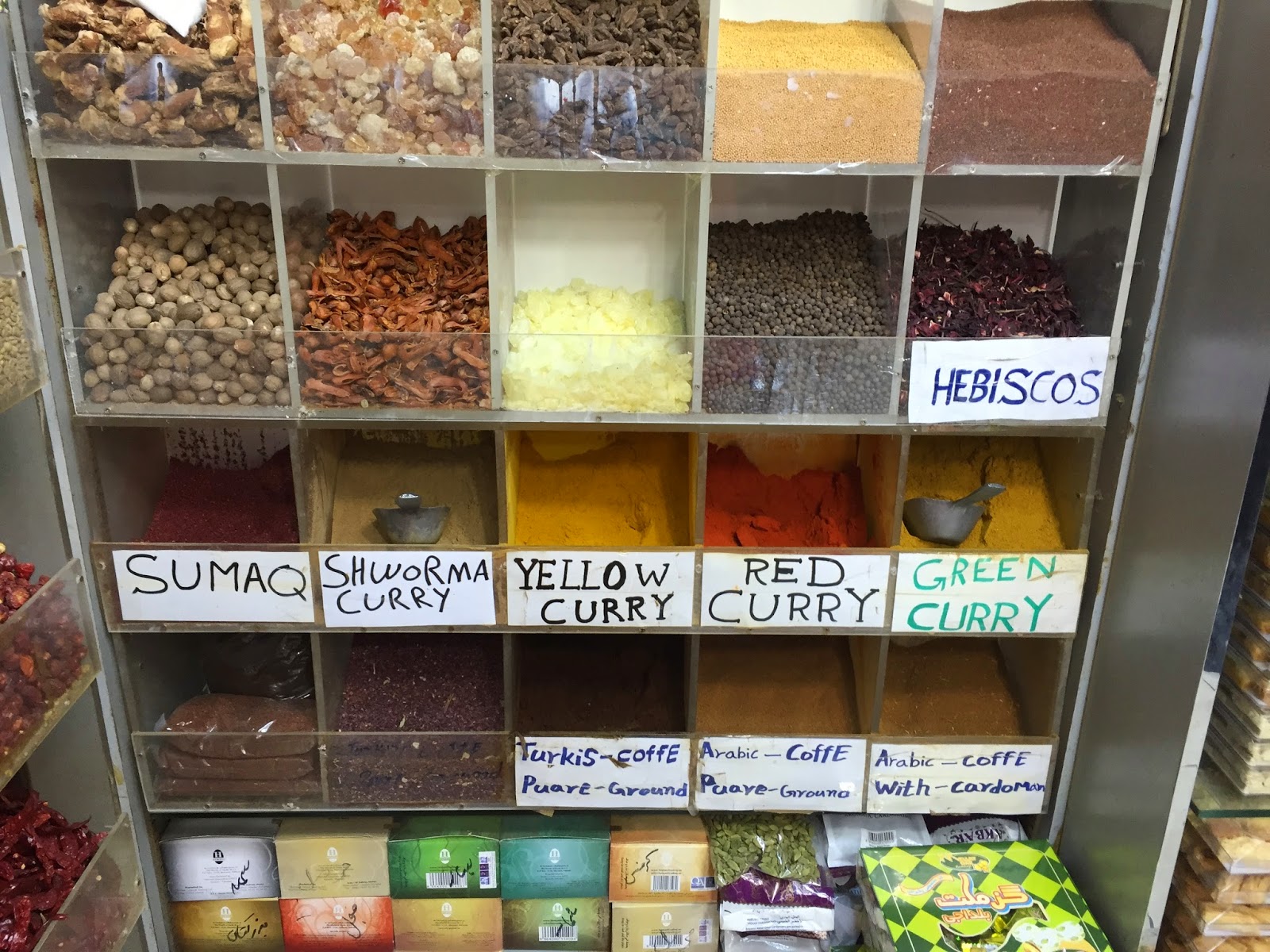 I loved the part that was filled with fabric, shoes, and clothing. The colors and fabrics were beautiful! If I knew how to sew, I would have come home with a ton of potential new skirts. 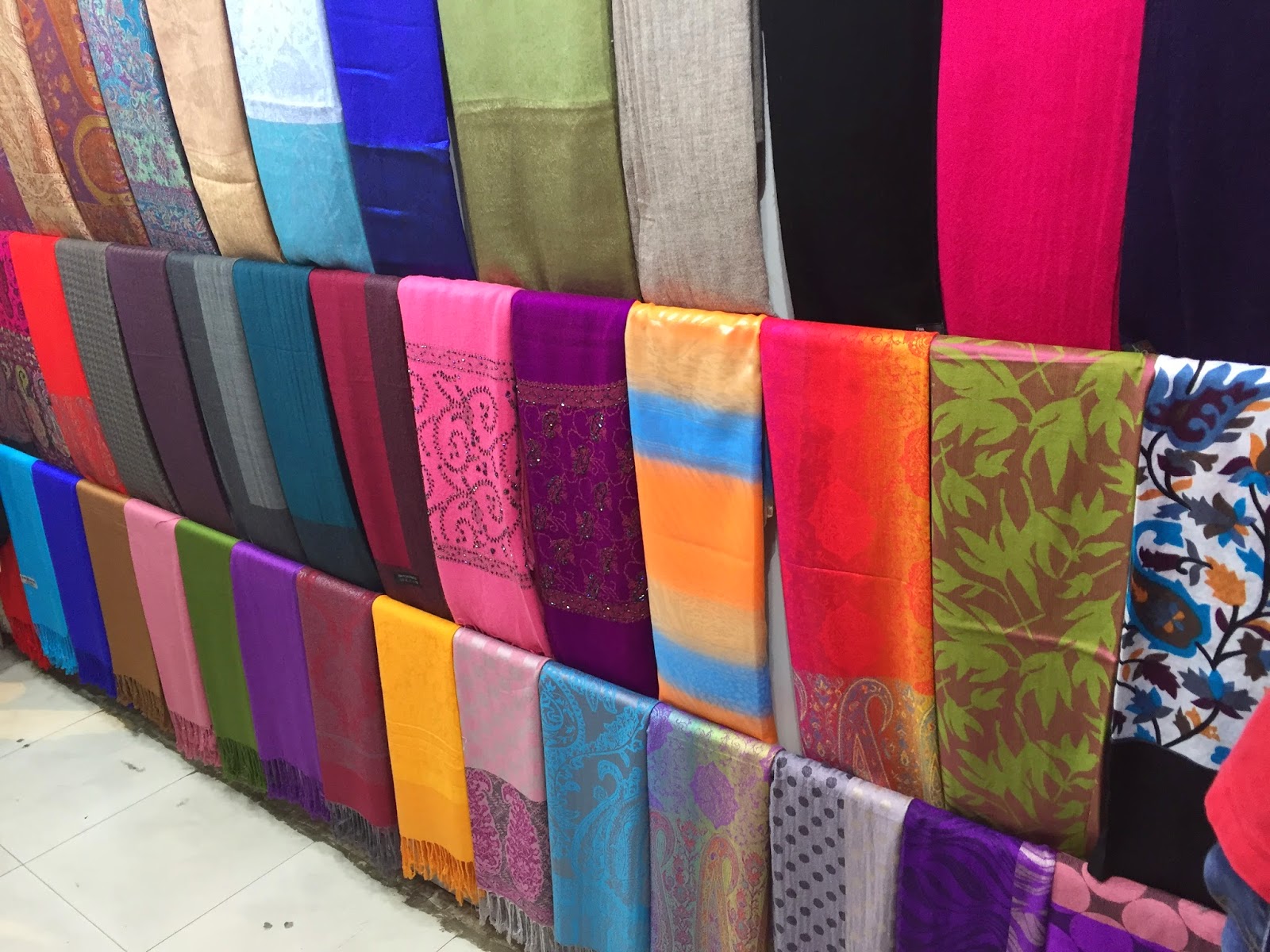 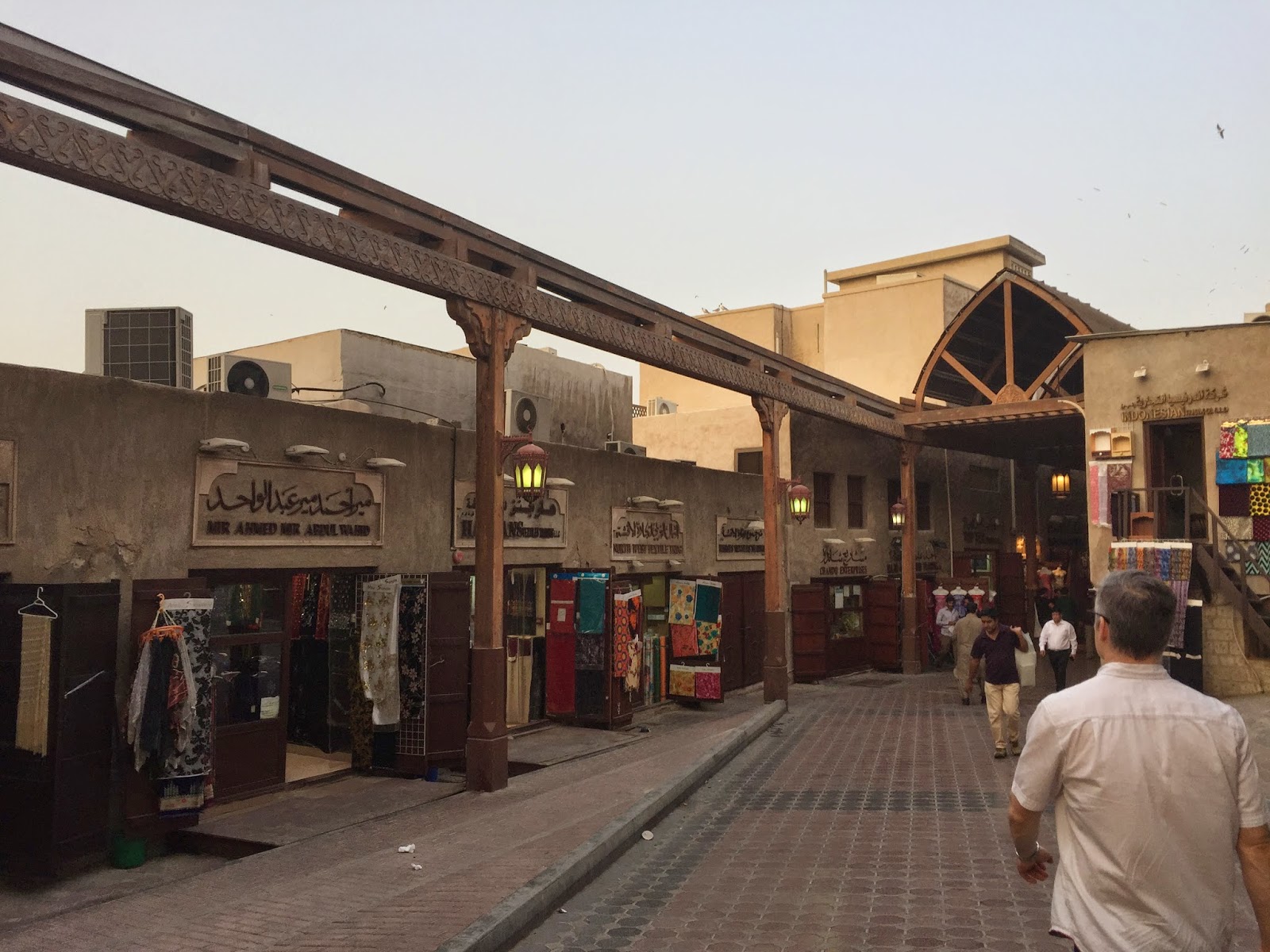 It was such an experience as we walked through the alleys and streets. The shop owners were all standing outside their shop doors, calling out to us as we passed in hopes we'd come in to buy.

I cracked up every time we passed a shop that sold pashmina scarves. Those are a BIG deal there. Those shop owners will even drape a scarf over you as you pass by so you can feel the real cashmere and be tempted to buy! 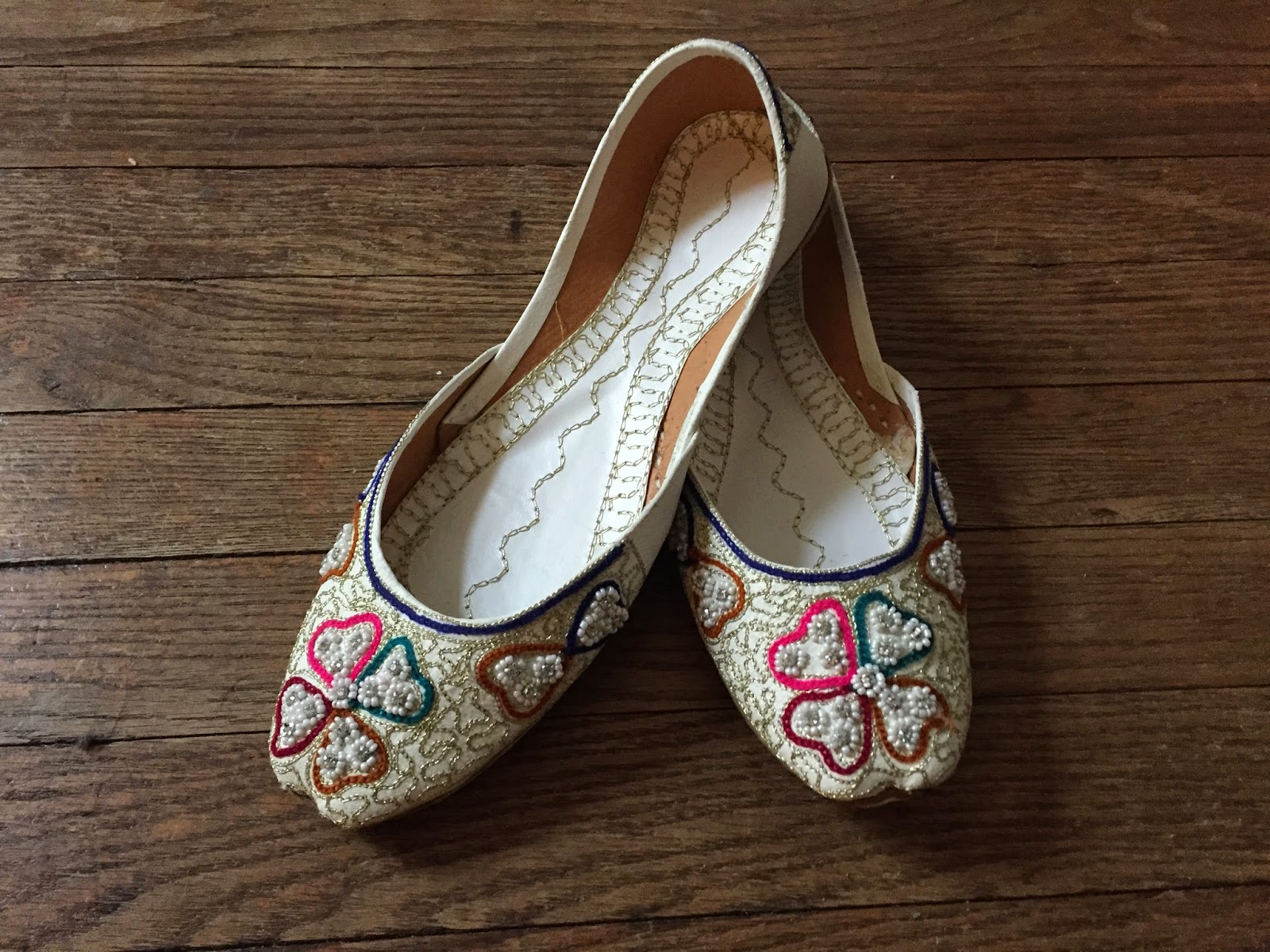 The pair of shoes I bought at The Souk - they were all so beautiful it was hard to pick just one pair!

Whenever the men would walk by, the salesmen would quickly spit out offers of "Rolexes" and fancy watches while the ladies got the scarf treatment or the murmurings of knockoff bags.

The shop owners had some funny ways to get your attention. A lot of times they'd call you names to flatter you (at one point, Kristana was called Angelina Jolie!). Other times, they'd ask where you were from and try to guess (one asked if I was from Germany and I had to laugh since I am the polar opposite of German! Hello!). 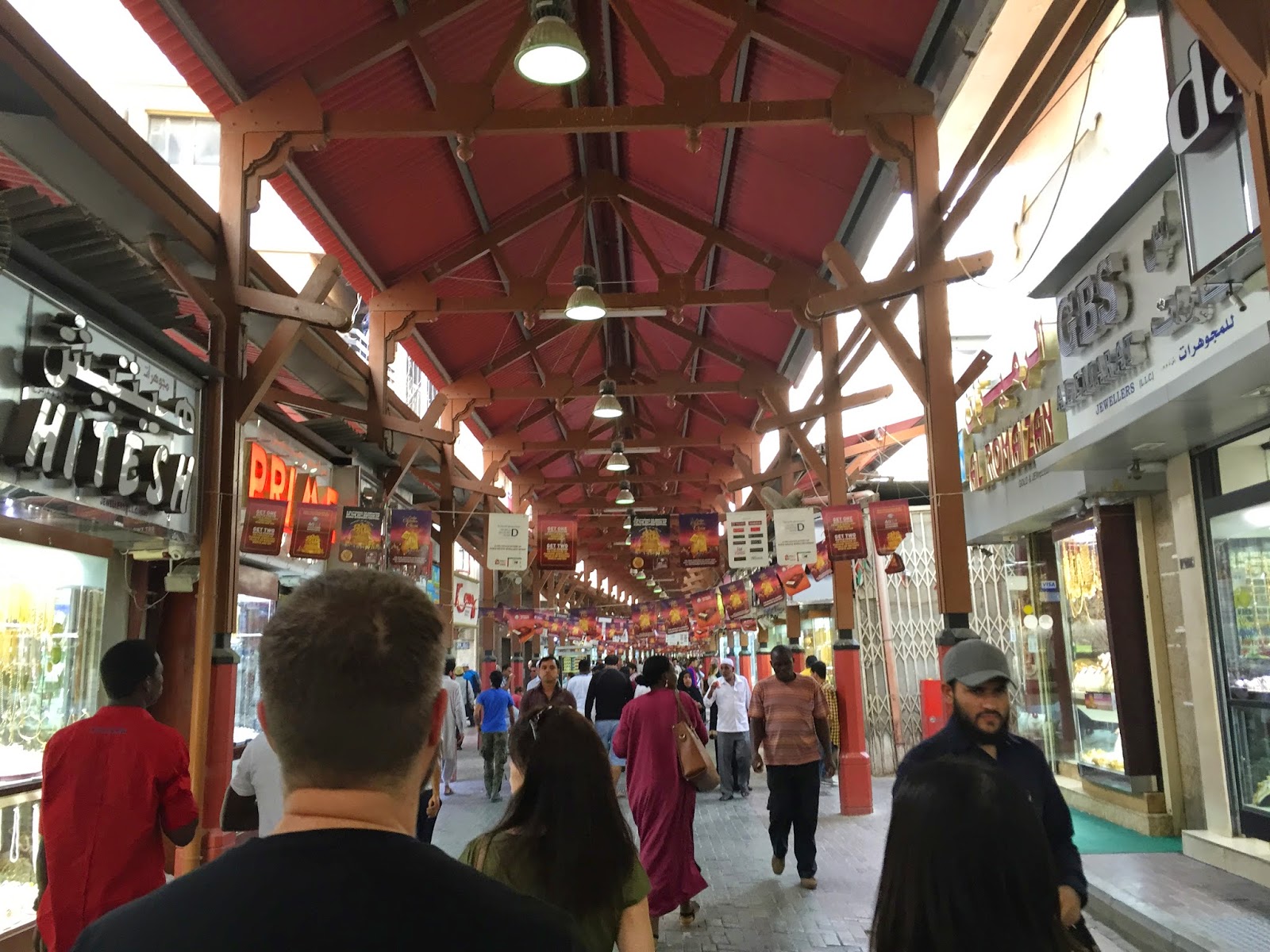 A few shop owners called me Shakira but before I could oblige and start belting out "My Hips Don't Lie," I was informed that "Shakira" for them was like calling me "pretty lady" or giving me a compliment.

Well, I would still be happy to sing some "Whenever, Wherever" if you wanted.

My favorite part of visiting the Souk was learning from the shop owners about traditional dress and what the items meant. It was nice to see how excited the shop owners were to teach us and explain their culture. They weren't annoyed or insulted at all when we asked about the robes the men wear and the traditional burkas. 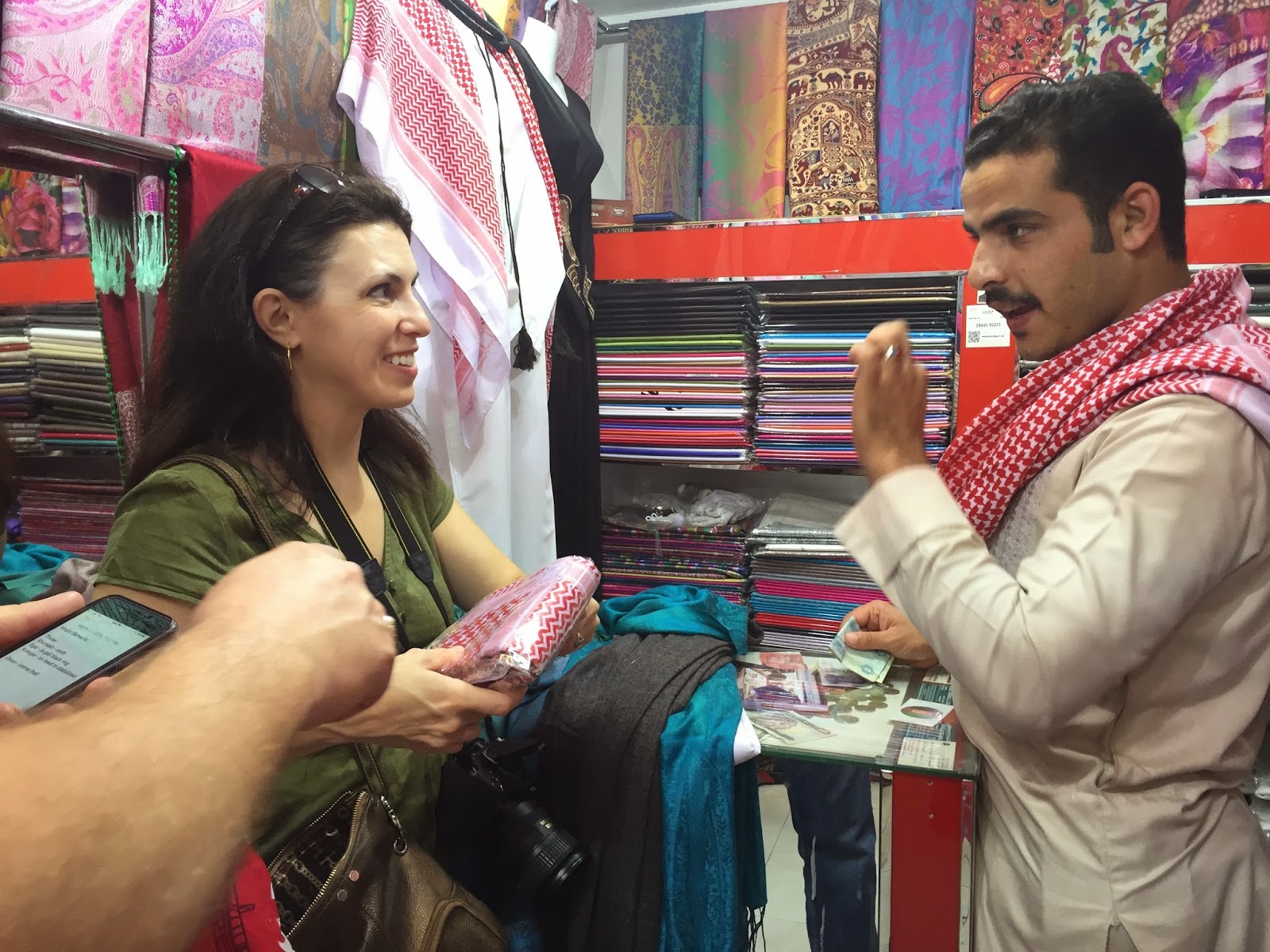 In fact, some were so happy to indulge us that they even convinced Kristana to try one on! Within seconds of having it on, Kristana reported how hot it was to be wearing it. I don't know how the women there do it! 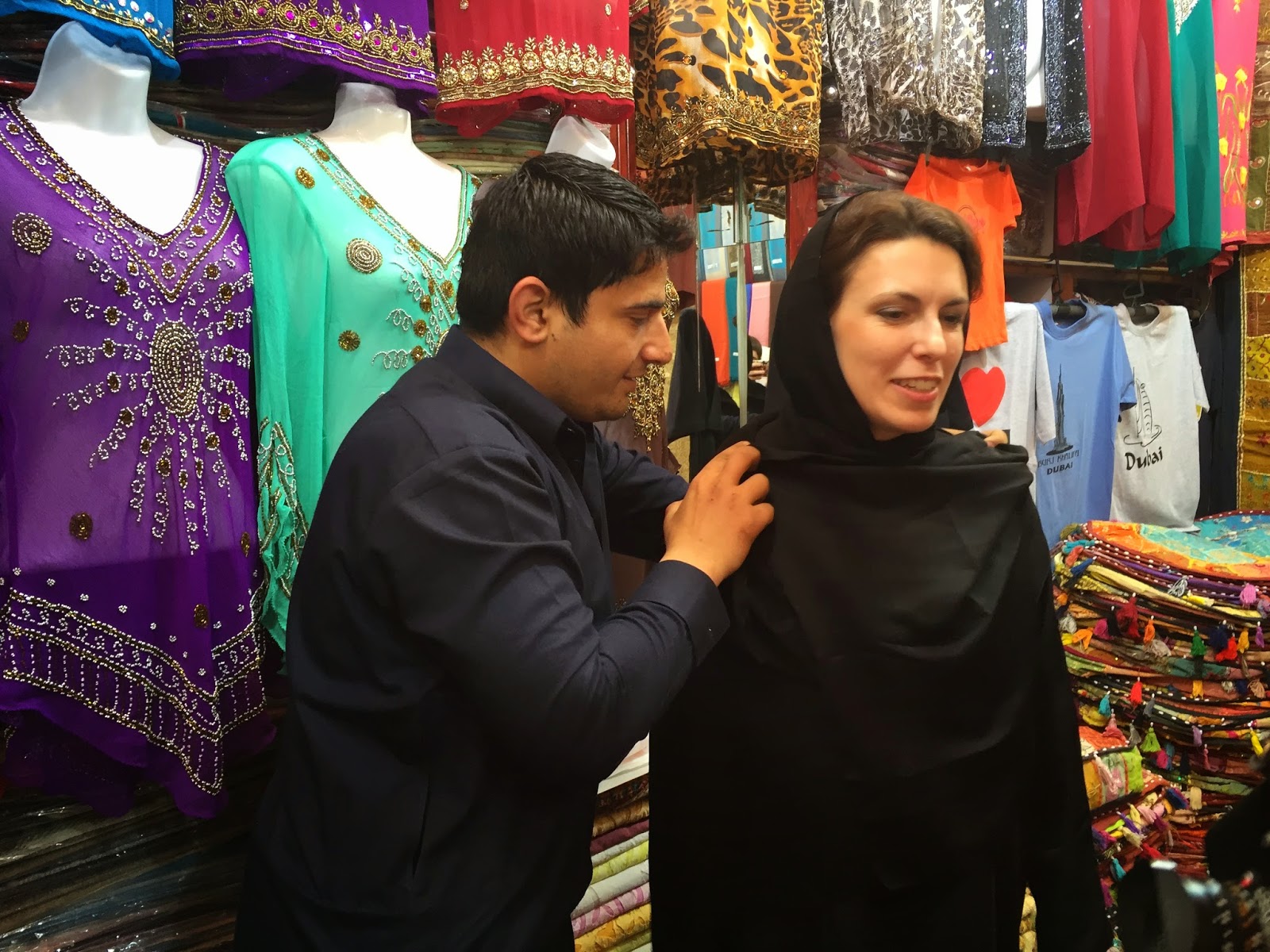 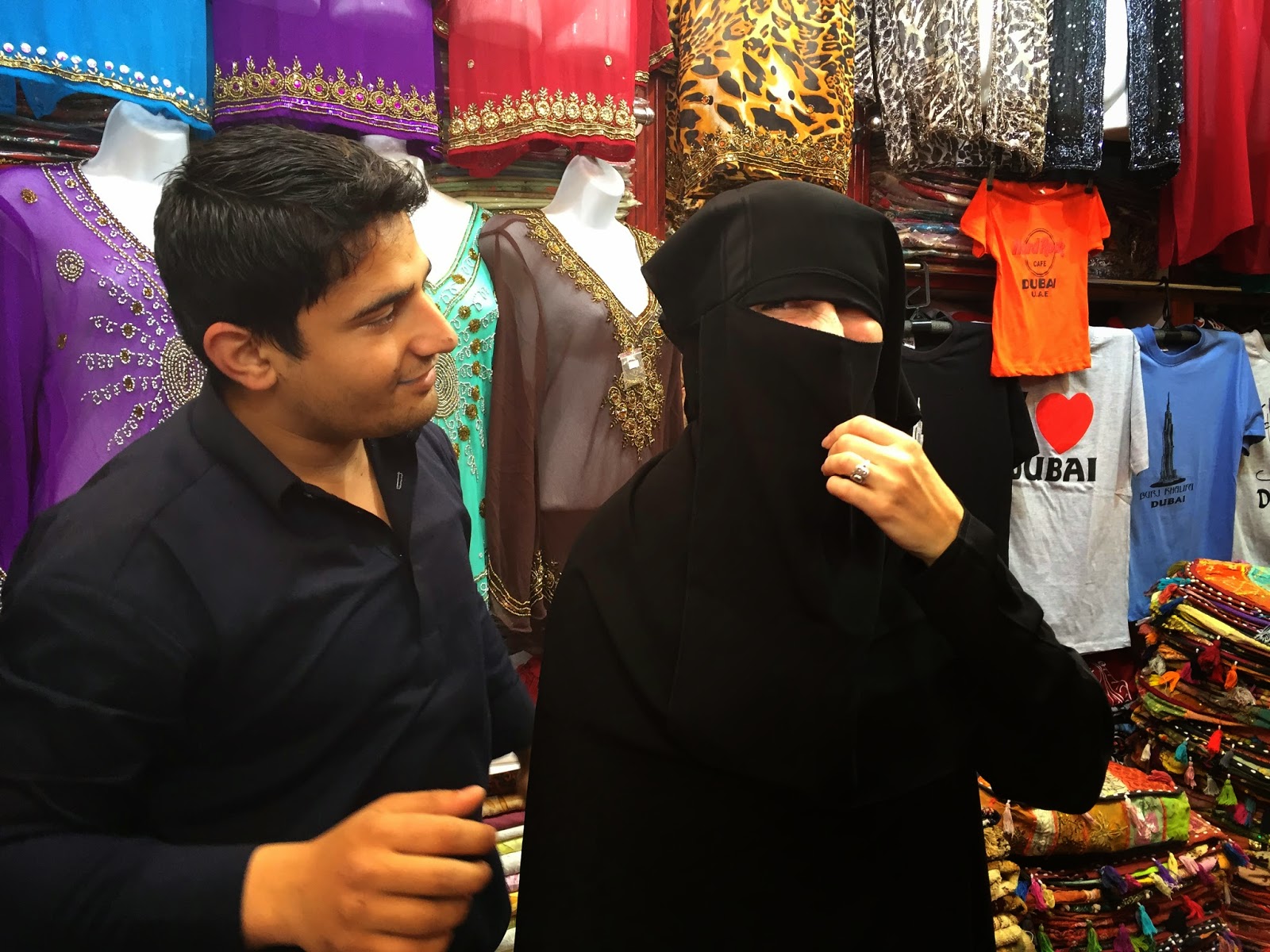 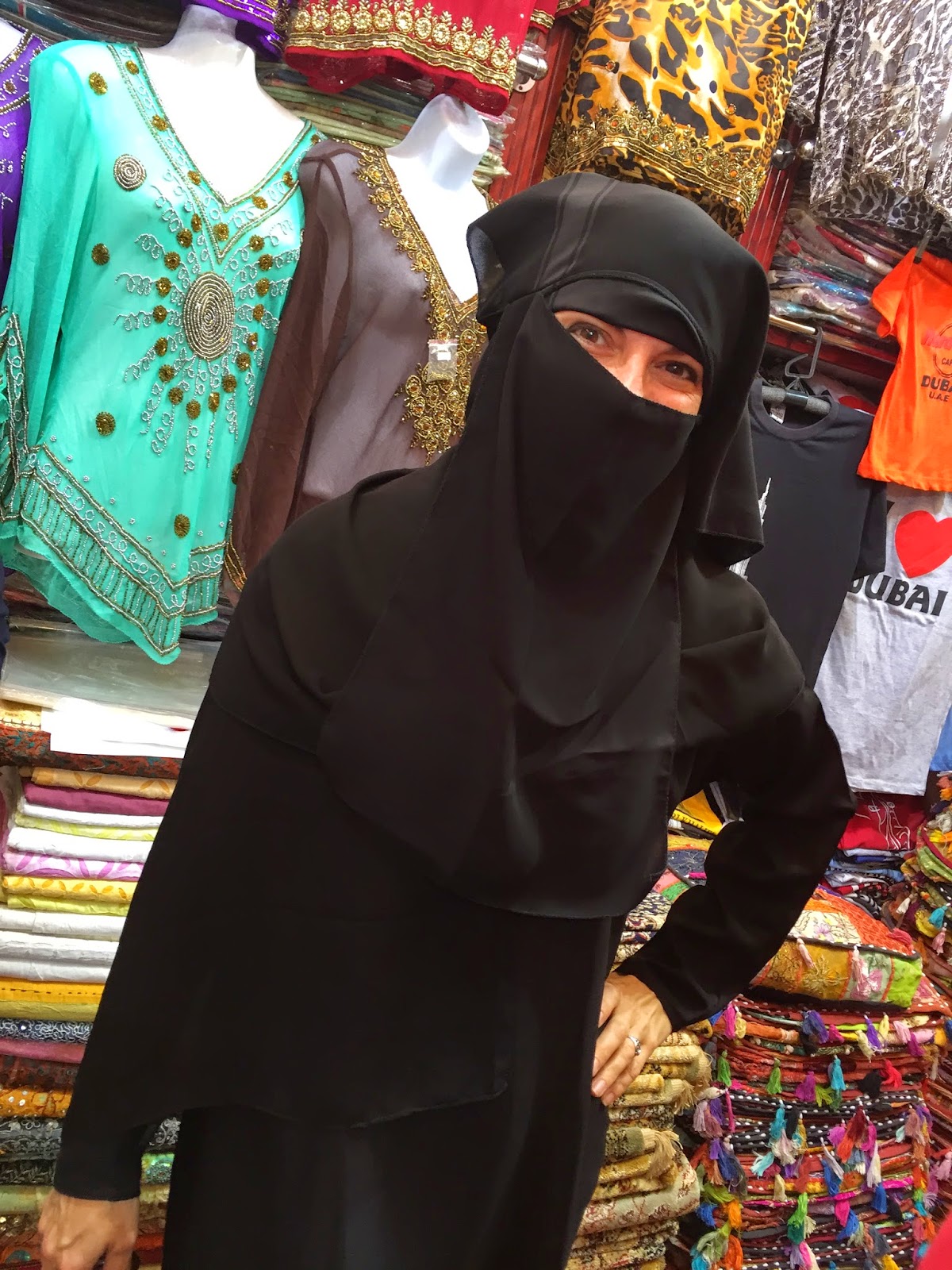 Though I must say, we saw quite a few different types of burkas on women while there and some were so intricate and beautiful! One woman we met had such a lovely decorated burka that we politely complimented her on it and she revealed that she designed it herself! How cool is that? It'd be like getting to design my own swing dress. So fun!

She then continued to show us her henna tattoos and talk about other burkas she designed. She was such a sweet gal - with some of the best cheekbones I ever saw! I had a bit of a crush. Before we parted ways, we all took a group photo and she had us take one on her phone too! It was like meeting us American girls excited her, too!

After the Souk, we took a short boat ride across the river. The boats had no sides to keep us from falling in! That was a little nerve wracking, but once you took a seat in the middle of the boat, it wasn't as dangerous at all. 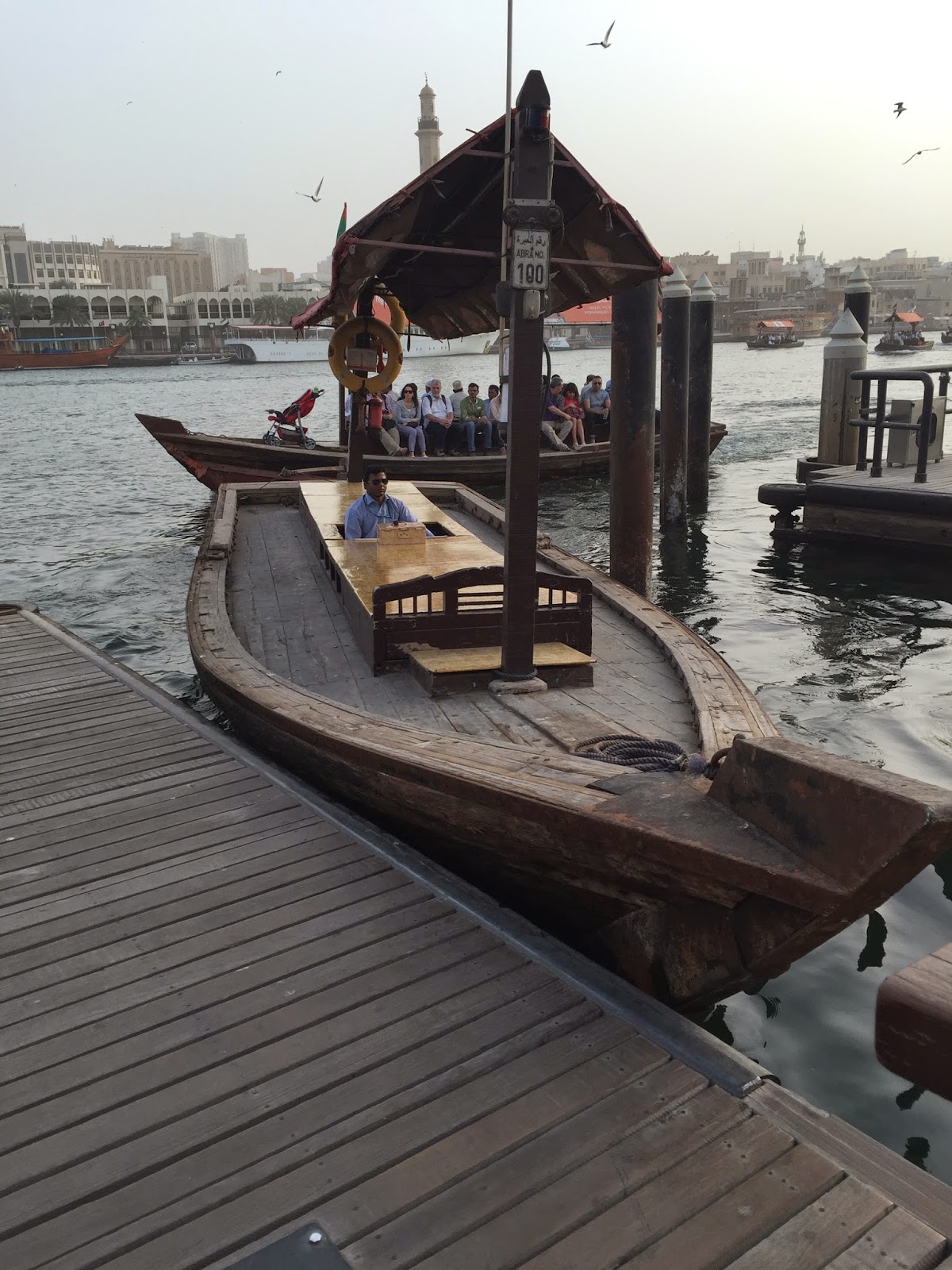 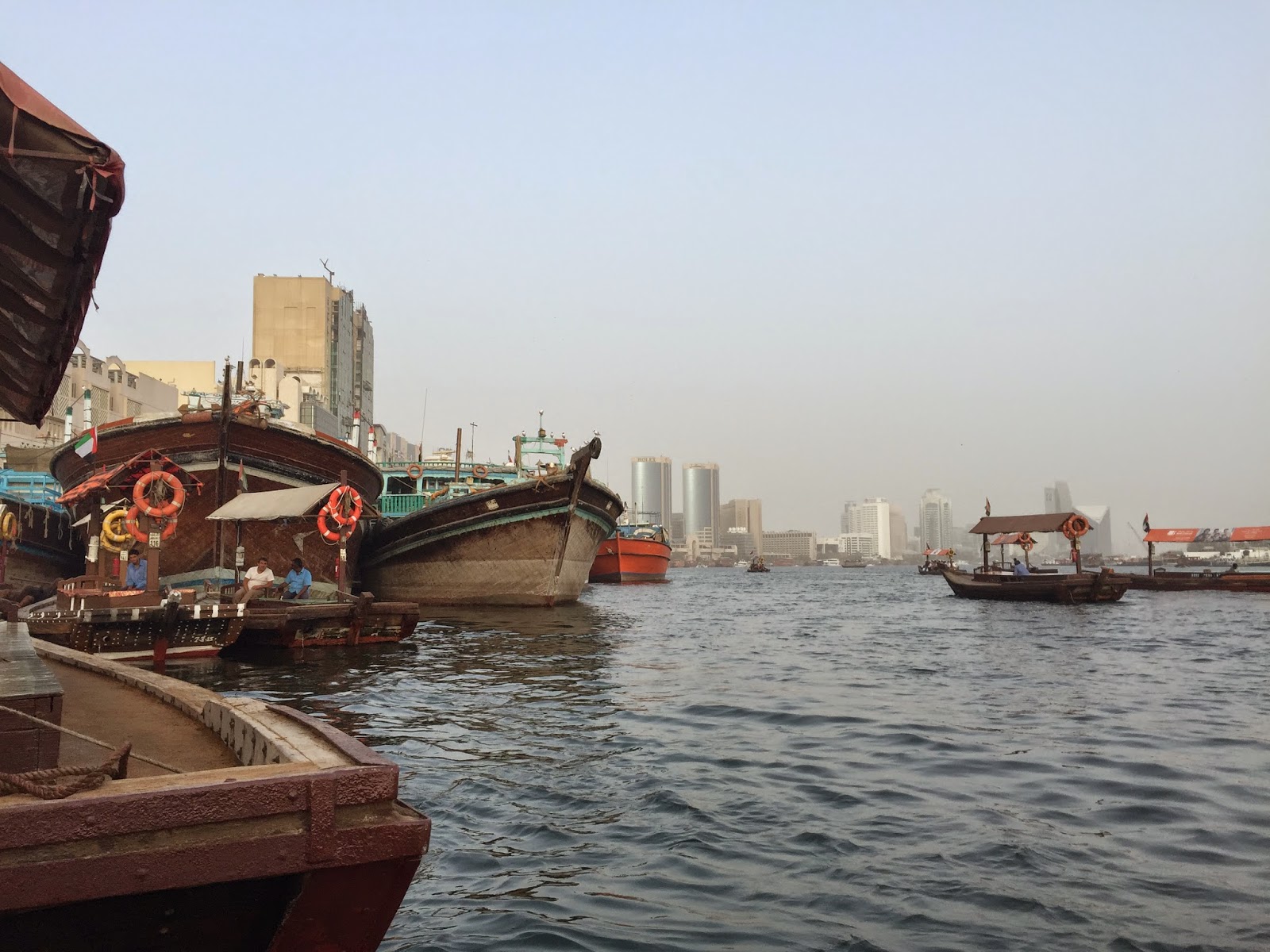 Once we crossed the river, we hailed a cab and headed back to the hotel. We were pooped! Knowing we had a big first day of the show coming up, we knew we wanted to grab a bite to eat somewhere nearby and call it a night.

Stay tuned, folks! We've got one more Dubai fun-filled post coming up next week!
Posted by SaraLily at 10:00 AM