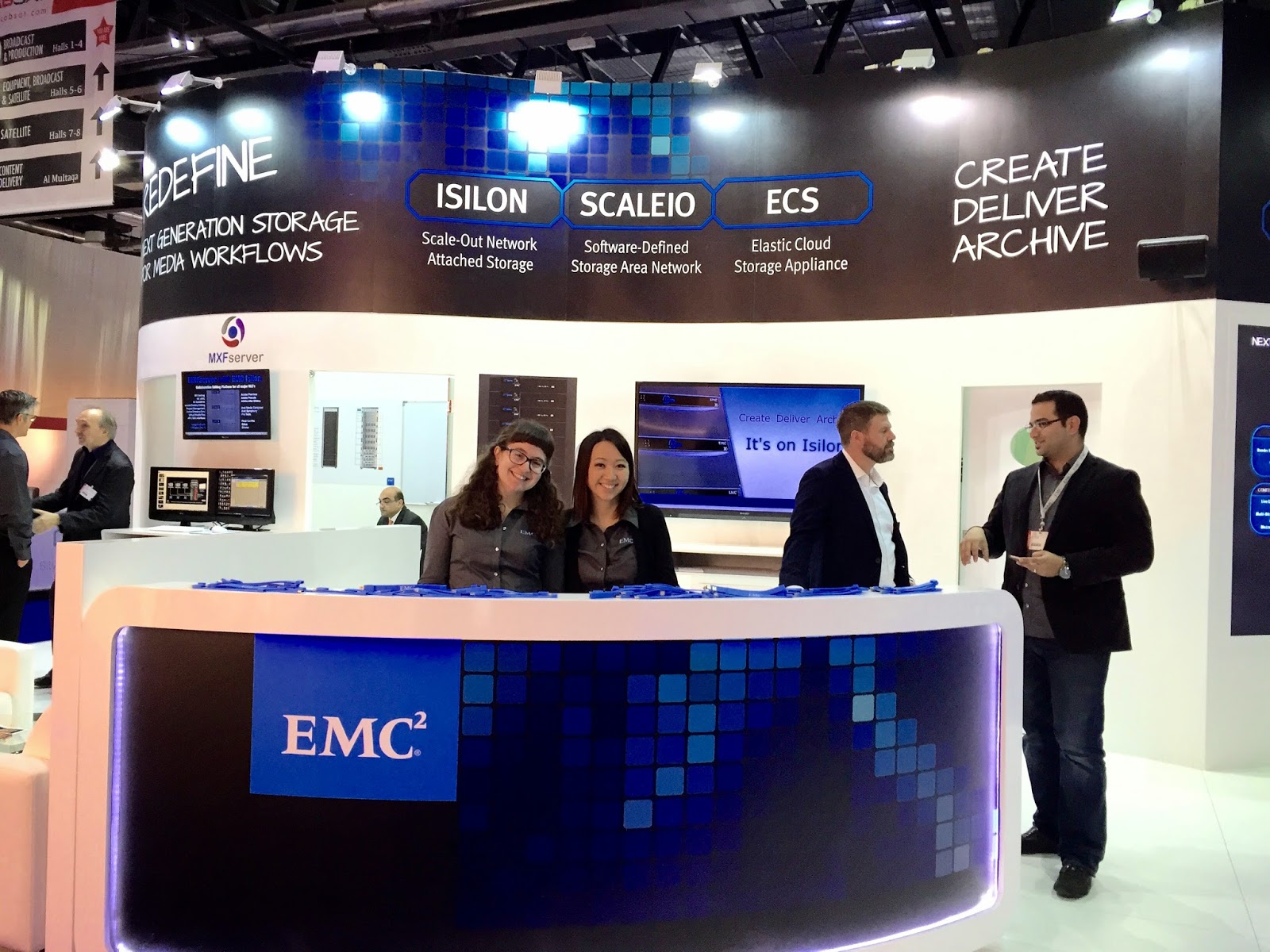 Last week I ventured out to Dubai - just a short 13 hour flight from Boston. From the moment I landed, I definitely felt like Dorothy after the tornado passed, leaving her in a strange land.

Toto, I was definitely not in Kansas anymore...

I was in Dubai to work at a trade show called CABSAT. My teammate Jenny and I had planned and executed a booth for EMC at this show. It was my first show in my new role - it was nerve wracking, exciting, and scary all at once.

I know, my first show and its in Dubai. Could I have gotten a show farther away? Not so sure. 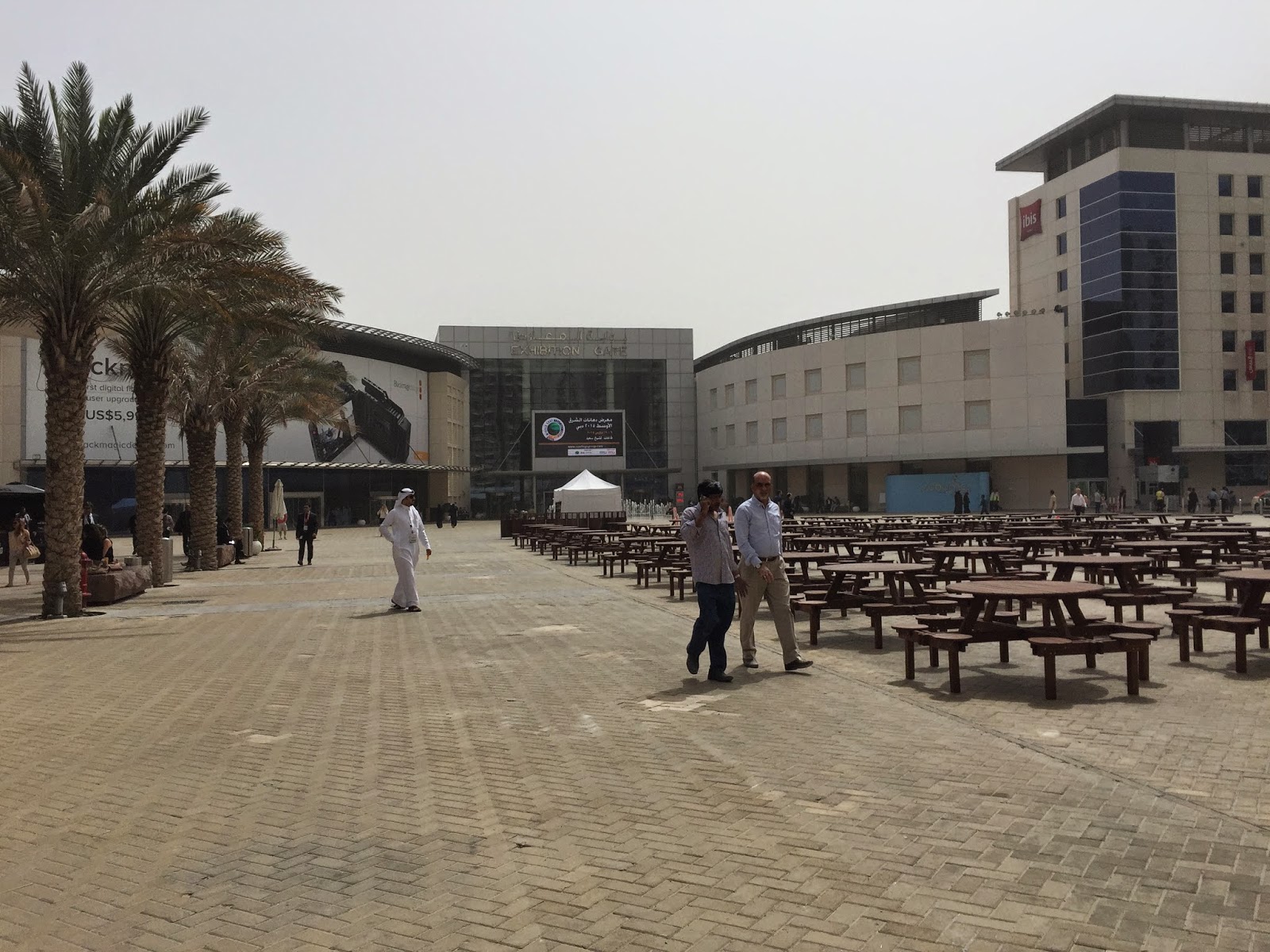 Anyway, while there we explored whenever we could. We explored so much I plan to separate our journey into 3 blog posts. So buckle up! For the next three Wednesdays, look out for a Dubai themed blog post.

Sorry if it gets annoying.

You can make a note to ignore me on Wednesdays if you wish - I won't take it personally.

I thought it'd be cool to show you our booth at CABSAT as well as some cool sight seeing in this first blog. It was definitely cool to be on the planing team for the show and to then see it all come to fruition. Makes all the stress and hard work worth it when you walk up to a booth and see it in the flesh. 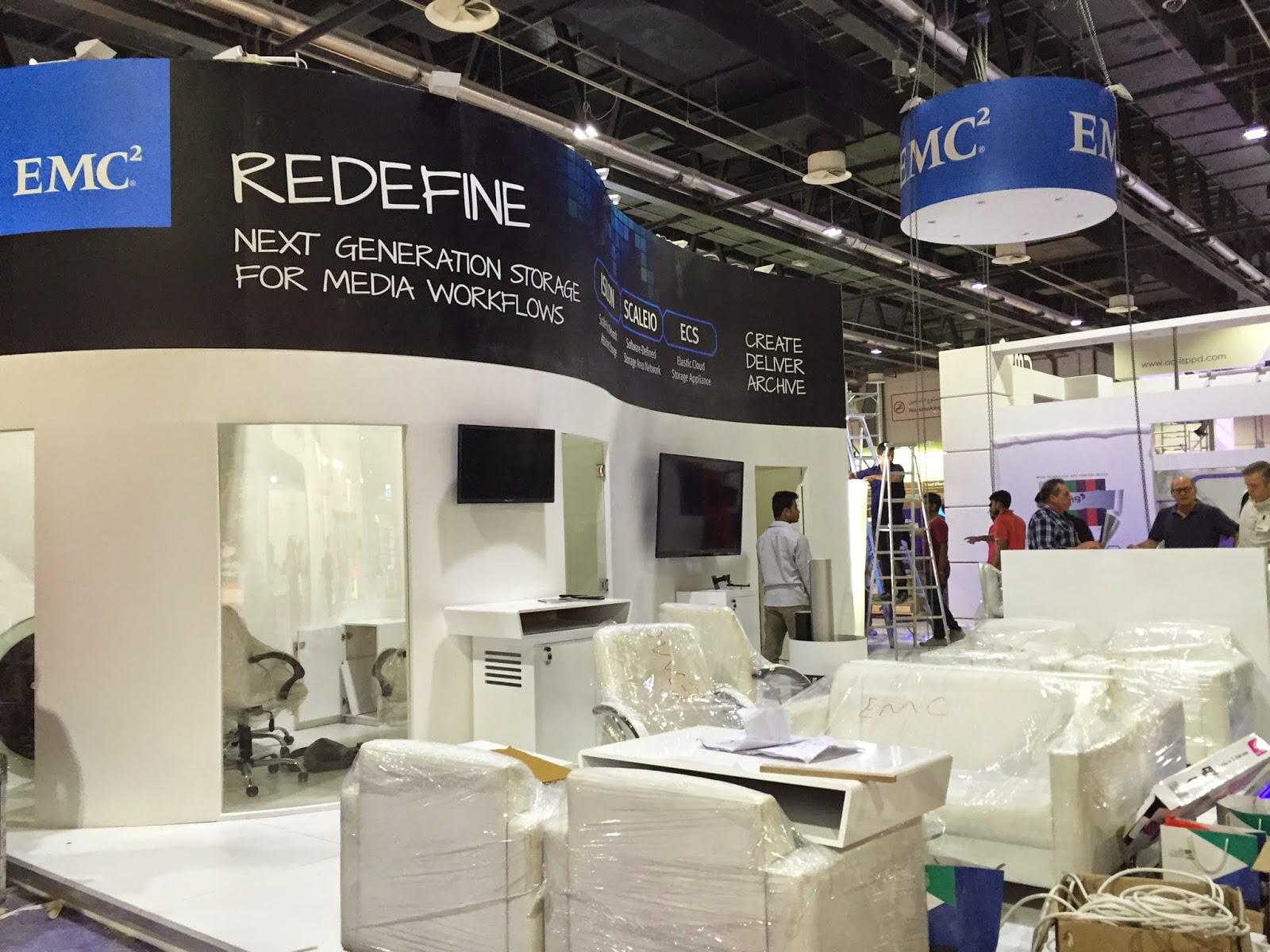 For a lot of our trade shows, we hire a magician - Scott -  to gather crowds at our booth. Scott has worked with my team for years but this was my first time witnessing his act and I was blown away. He definitely knows how to pull people in and even after seeing his set for 3 days in a row, I am still baffled by some of them! How? HOW!? 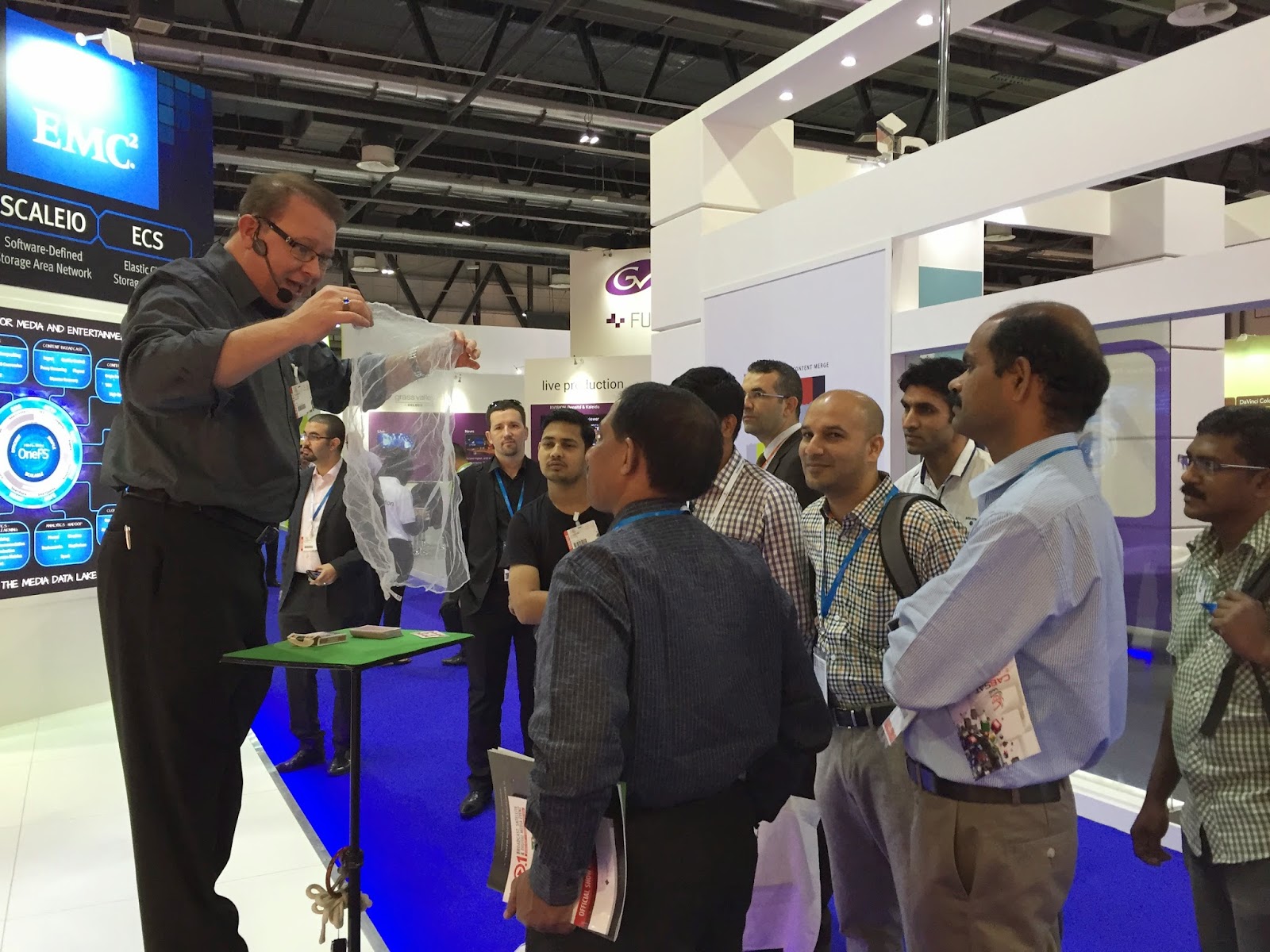 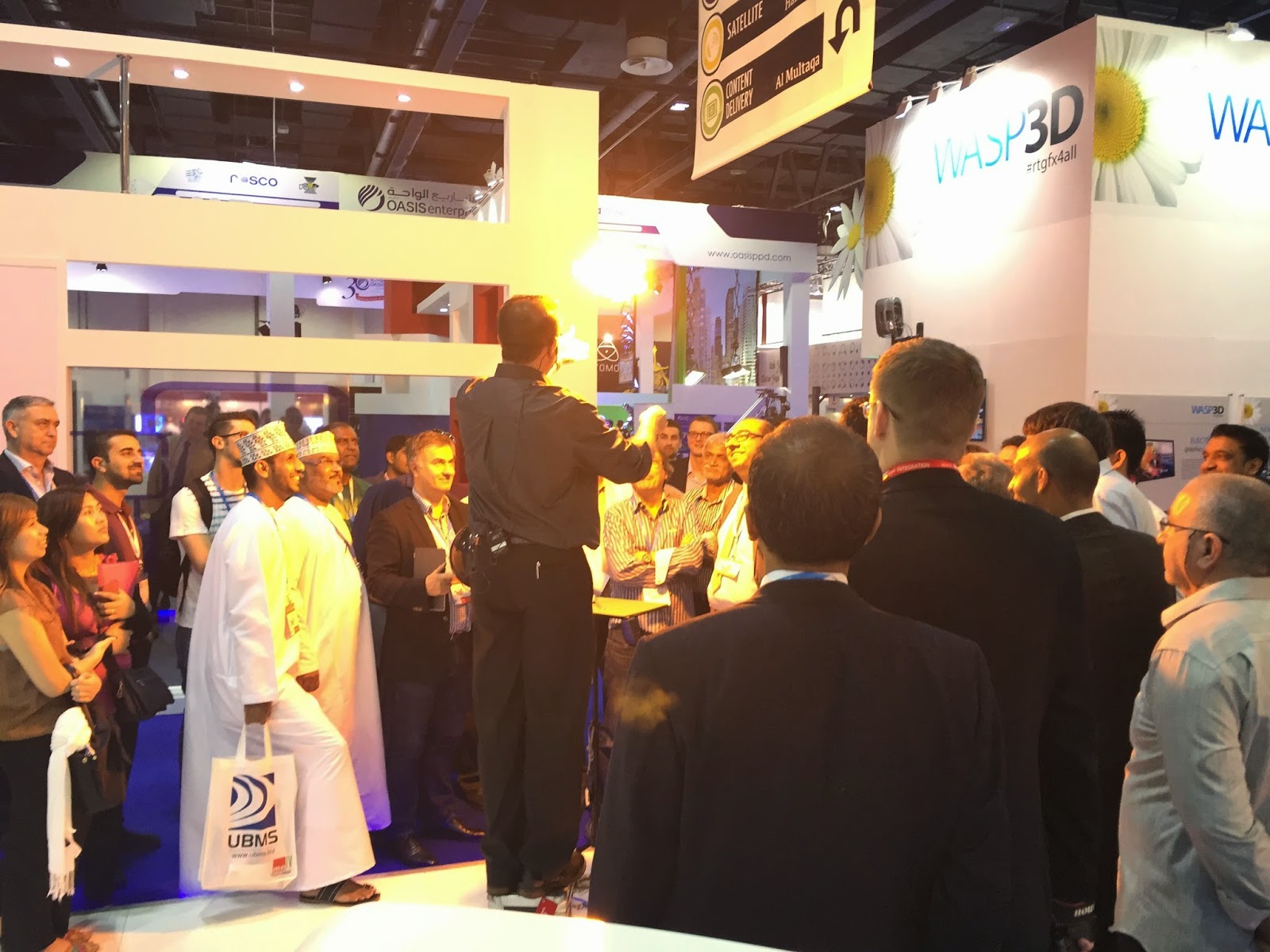 Being in Dubai was definitely a culture shock. I knew it would be. For the most part, I was amazed at the architecture and how much it actually reminded me of Las Vegas - just a very different part of the strip without the gambling or booze. Certainly though, some elements took some getting used to - the women's only car on the train, the constant honking 24/7 due to insane driving habits (seriously - riding in a cab there was terrifying!), and figuring out the differences between USD and AED/Durhams. 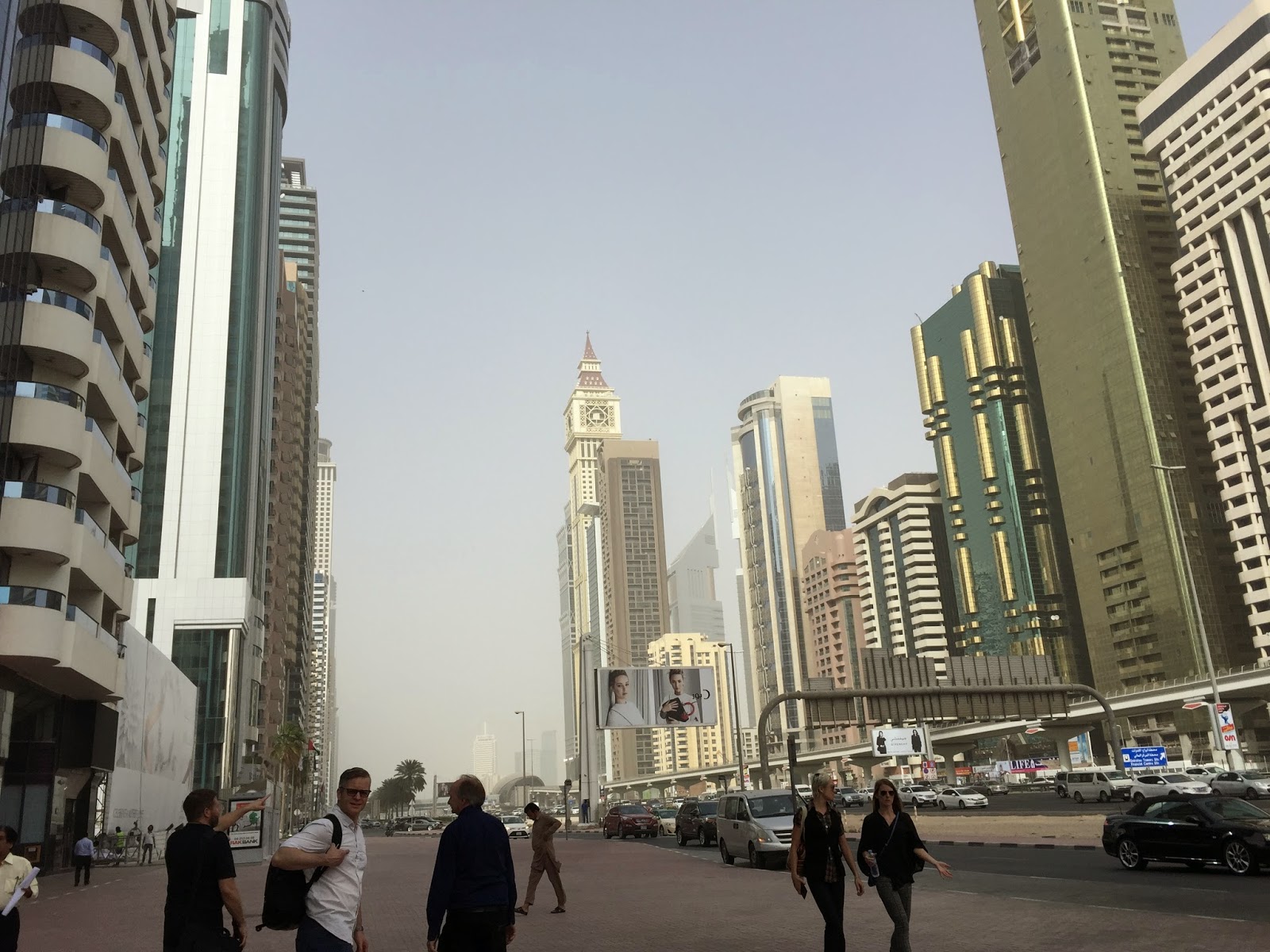 We spent one night at the Dubai mall. After dinner at The Social House, we stepped right outside the restaurant's doors to watch the water fountain show on the water by the Burj Khalifa - the tallest skyscraper in the world. Cool, huh? 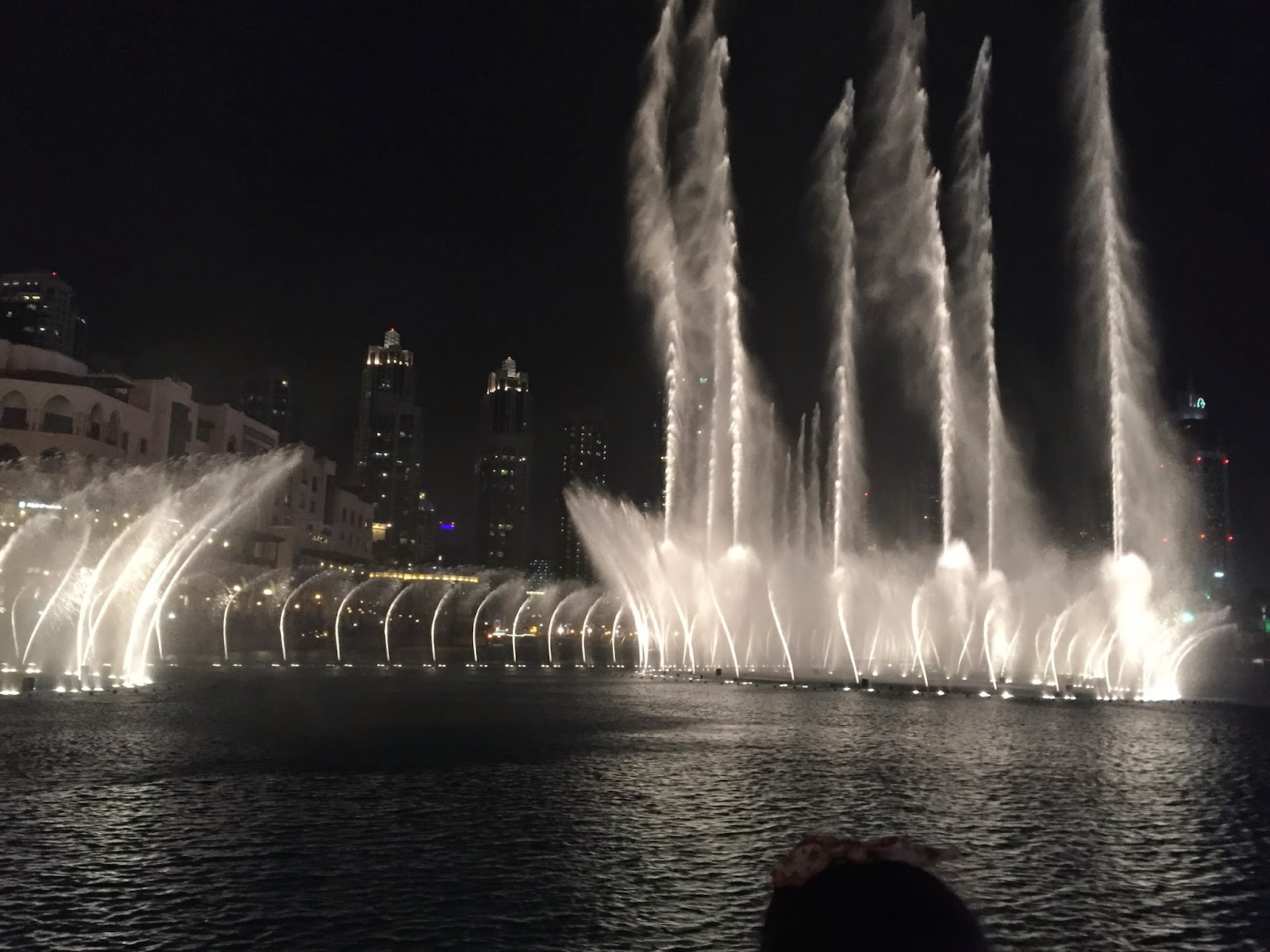 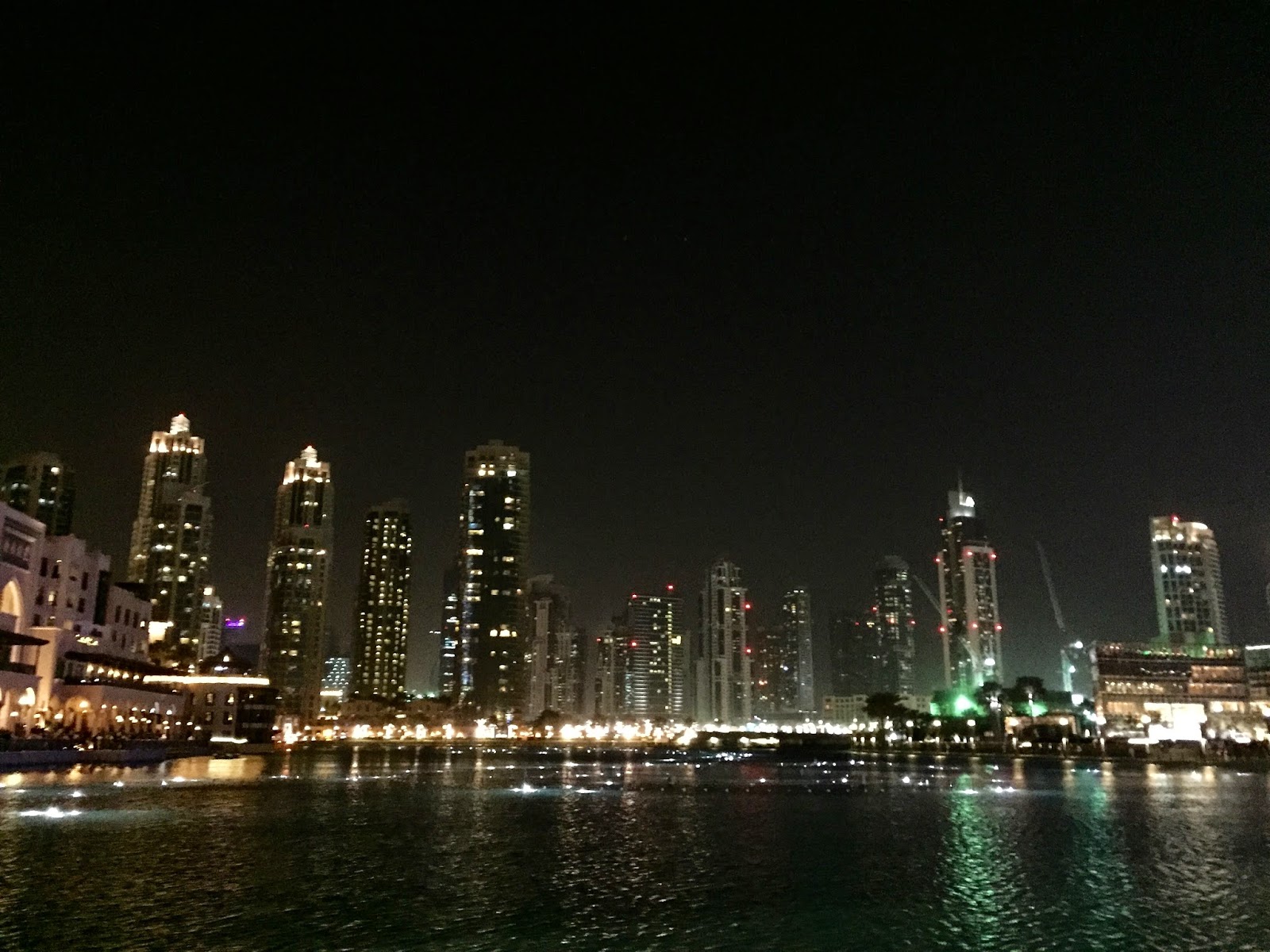 The city looked beautiful at night and with the weather being so nice compared to Boston - 80 degrees during the day, 70 degrees at night - it was heavenly to be wandering around outdoors to see it! 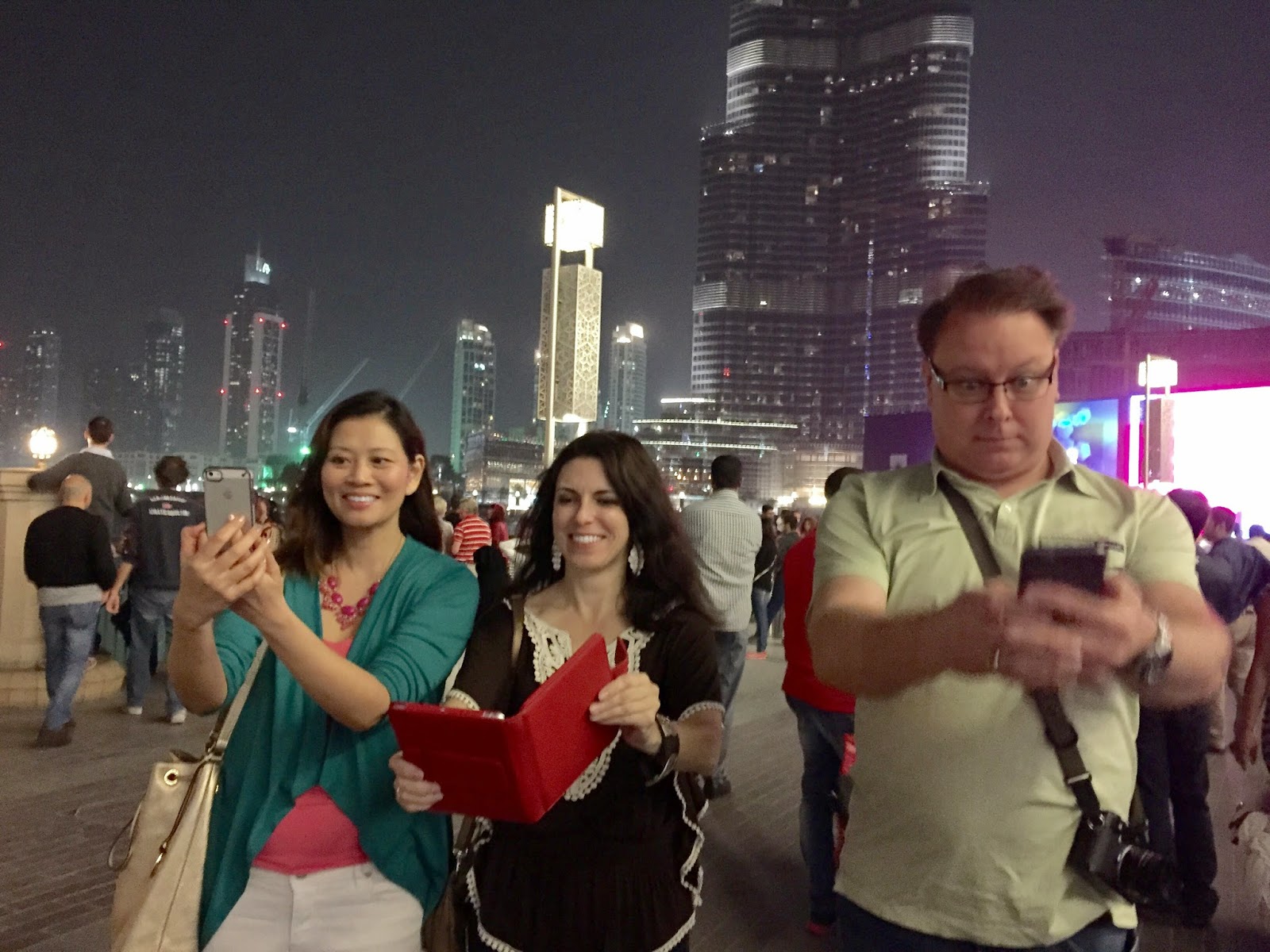 The Dubai mall was definitely an interesting experience. You think your mall gets crazy at Christmas time? Try the Dubai mall anytime - it was so packed! It was hard to really take it all in since you really had to keep your eyes peeled as you walked around. I kept my phone away for most of it while we shopped for souvenirs but had to capture this store as it seemed out of place: 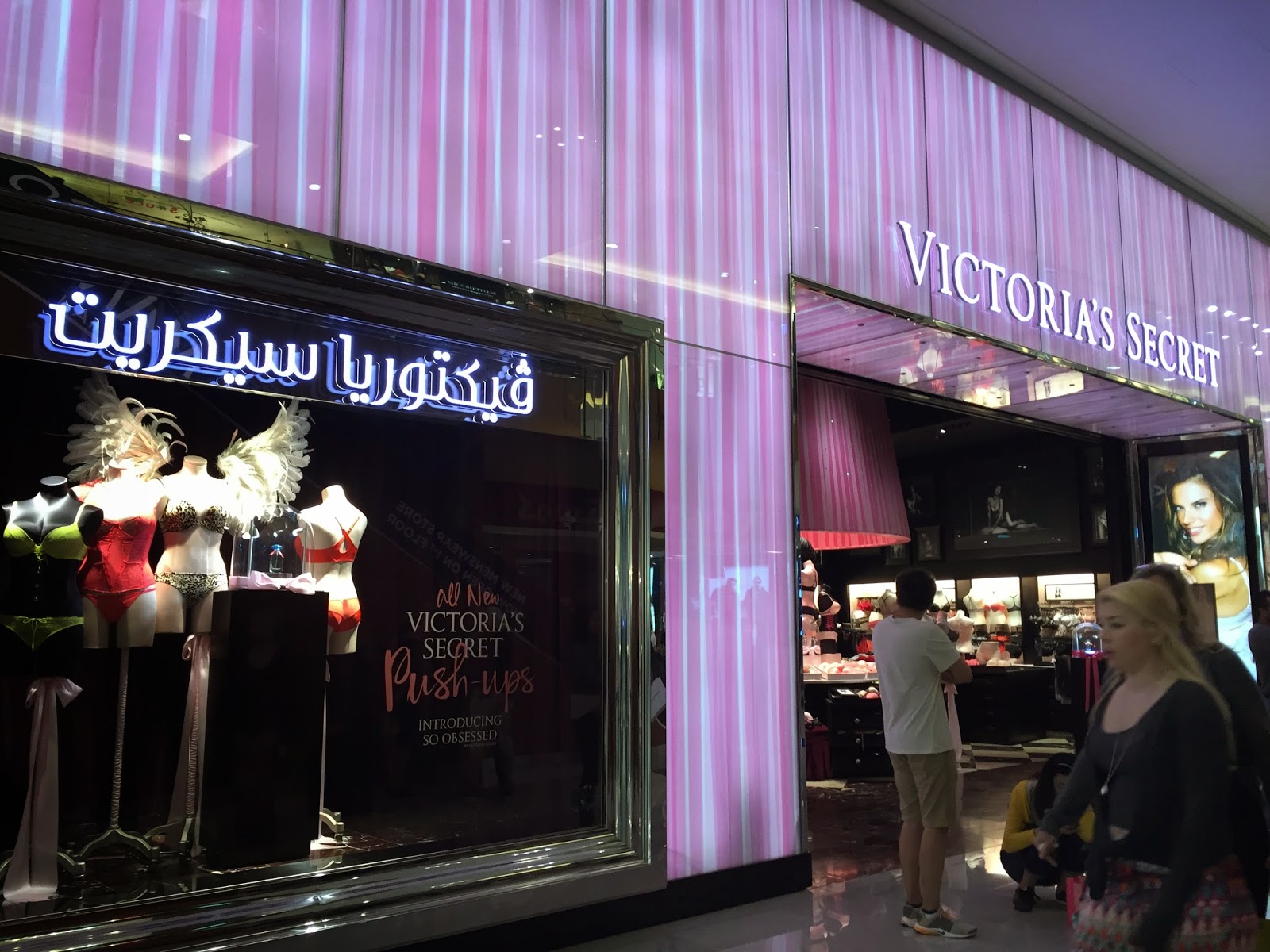 Victoria's Secret in English & Arabic - I guess the women have to wear something under their burkas, right?

Though the point of our trip was to successfully execute the trade show, I am so glad we got to sight see and play the role of tourists at least a few times while in Dubai. How could we not? I can't wait to share my experiences in the Souk (the markets) as well as how we celebrated a job well done on our last night in Dubai. Stay tuned for more next week!
Posted by SaraLily at 11:36 AM