Last year, someone brought up the idea of having a Friendsgiving of our own. For those who are unfamiliar with the term, Friendsgiving is basically Thanksgiving only with friends. No family allowed! OK, that's a bit much, but you get the idea. For Cody and me, our friends are our family (well, our second family anyway) so we knew we wanted to host one. Then came the question of WHERE we'd have it.

We couldn't host last year due to our living arrangement (I was still renting 1BR apartments and he still lived in his tiny cottage that barely fit a futon in its living room) but we knew once someone had a big enough space, we'd have Friendsgiving. 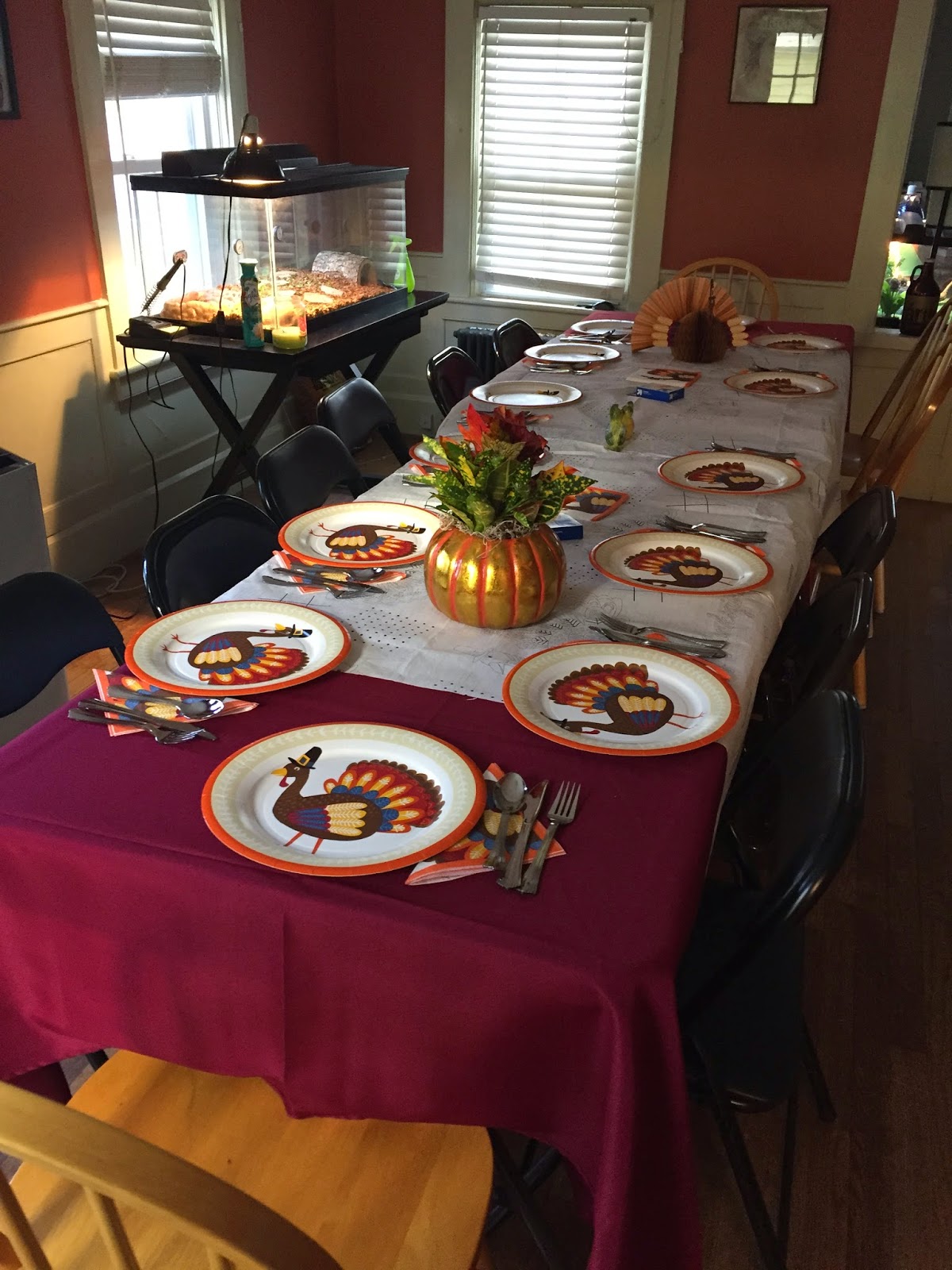 This year was the year!

Now that Cody and I are renting our house and have plenty of room, the possibilities are endless! Friendsgiving was on! So on November 22nd, the Saturday before Thanksgiving, we had 11 friends over for turkey, pie, drinks, and fun!

I may have had a little too fun preparing.

I knew I'd whip up a punch and since it's the holidays, I stayed away from the tropical kind and instead, made a combo with blueberry lemonade, pomegranate blueberry juice, and some citrus and blueberry vodka. Easy peasy and yummy, too!

Although I started shopping for decor a bit too late (apparently Thanksgiving decorations come out when Halloween ones do and once the switch is made from Halloween to Christmas, you're screwed for Thanksgiving stuff - good to know!), I found a couple things at my trusty neighborhood Target.

One of the things I bought was a paper tablecloth meant for the kids' table covered in games and turkeys to color. I put it out on the table with crayons sort of as a joke but it ended up being the best part!

Everyone was playing games and decorating their turkeys as Cody and I carved up the turkey and got everything served. I laughed at the concept! It was a good thing I grabbed that tablecloth! 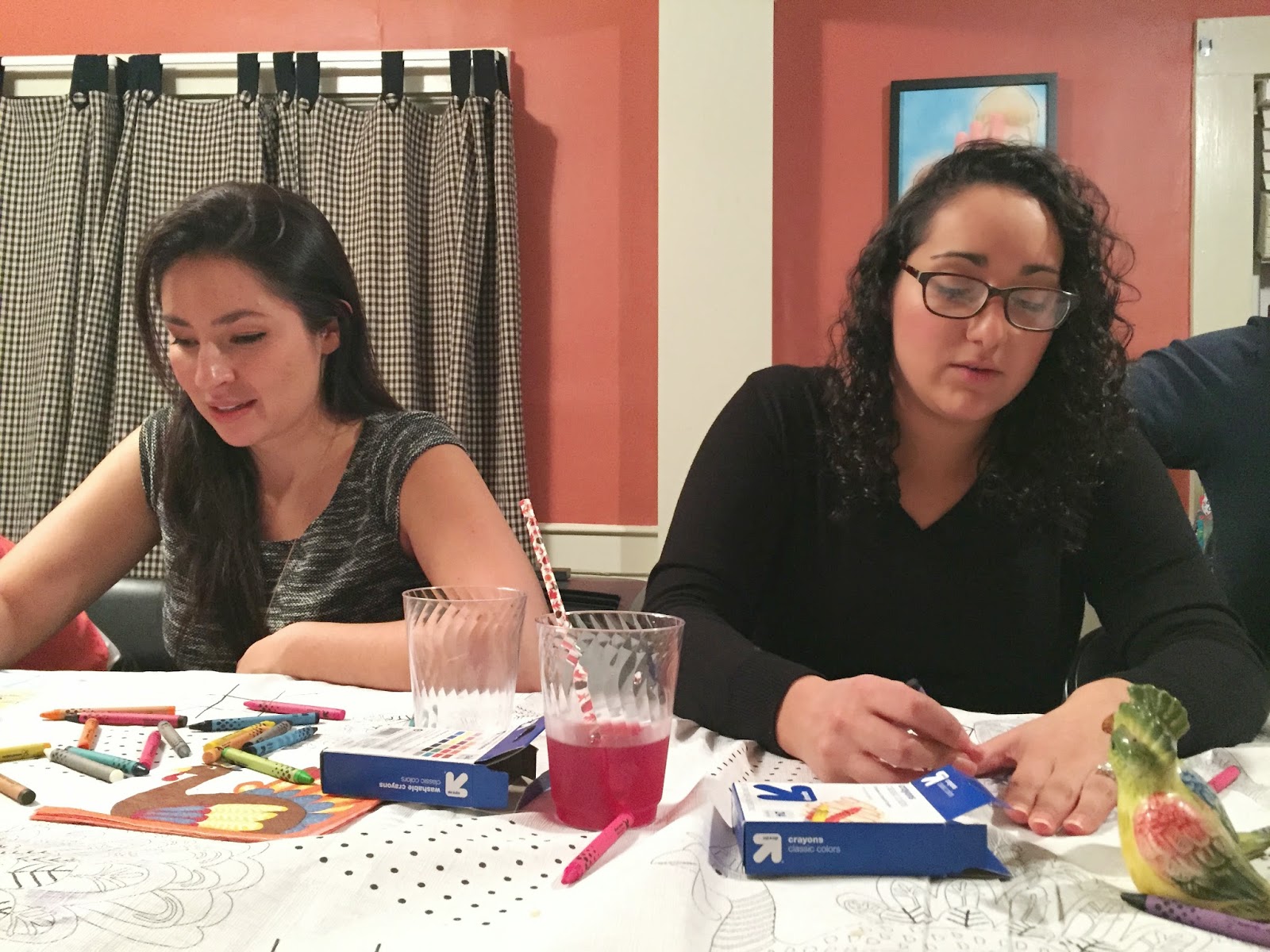 So since we were hosting, it sort of made sense that we'd be in charge of the turkey. I was a bit nervous since I had never made a turkey before. My father always has (and does so amazingly, by the way) but I had yet to even consider conquering poultry of this size. So I did the only thing I could do - called up my dad to ask for help! He gave me his advice and instructions on what to do and off I went!

Our method for picking out the turkey? We just grabbed the biggest one we could find at the store - just a small 20lb bird. No biggie.

I had NO idea what I was doing but we just went with it and hoped for the best. We didn't stuff the turkey since one of or friends was bringing that. Instead, we stuffed it with onions, carrots, and celery. I think that decision was the best in the end!

Then we just covered it with garlic powder, salt, pepper, and plenty of melted butter. 4 1/2 hours later, we had a pretty perfect looking turkey, if I do say so myself! 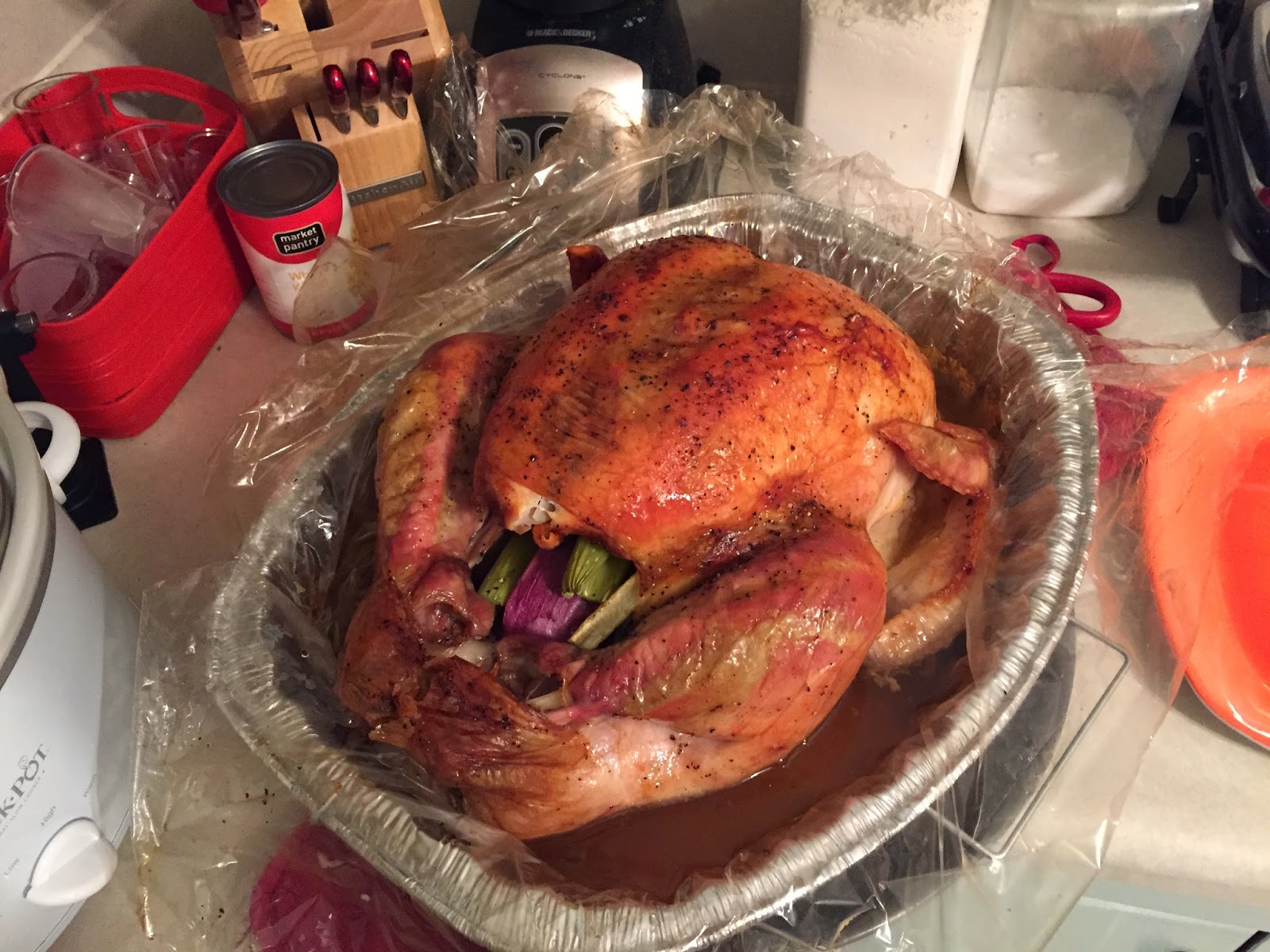 I was surprised to see that the party didn't wind down until midnight. After we had dinner, the coloring had continued. I started making coffee and we put the spread of desserts on the table (pies, cakes, brownies, cookies, you name it!). At first everyone claimed they were too full but once the pies started getting sliced up, no one could resist helping themselves. Everyone was nibbling pie as they finished coloring their turkeys! It was quite hilarious to watch, actually. 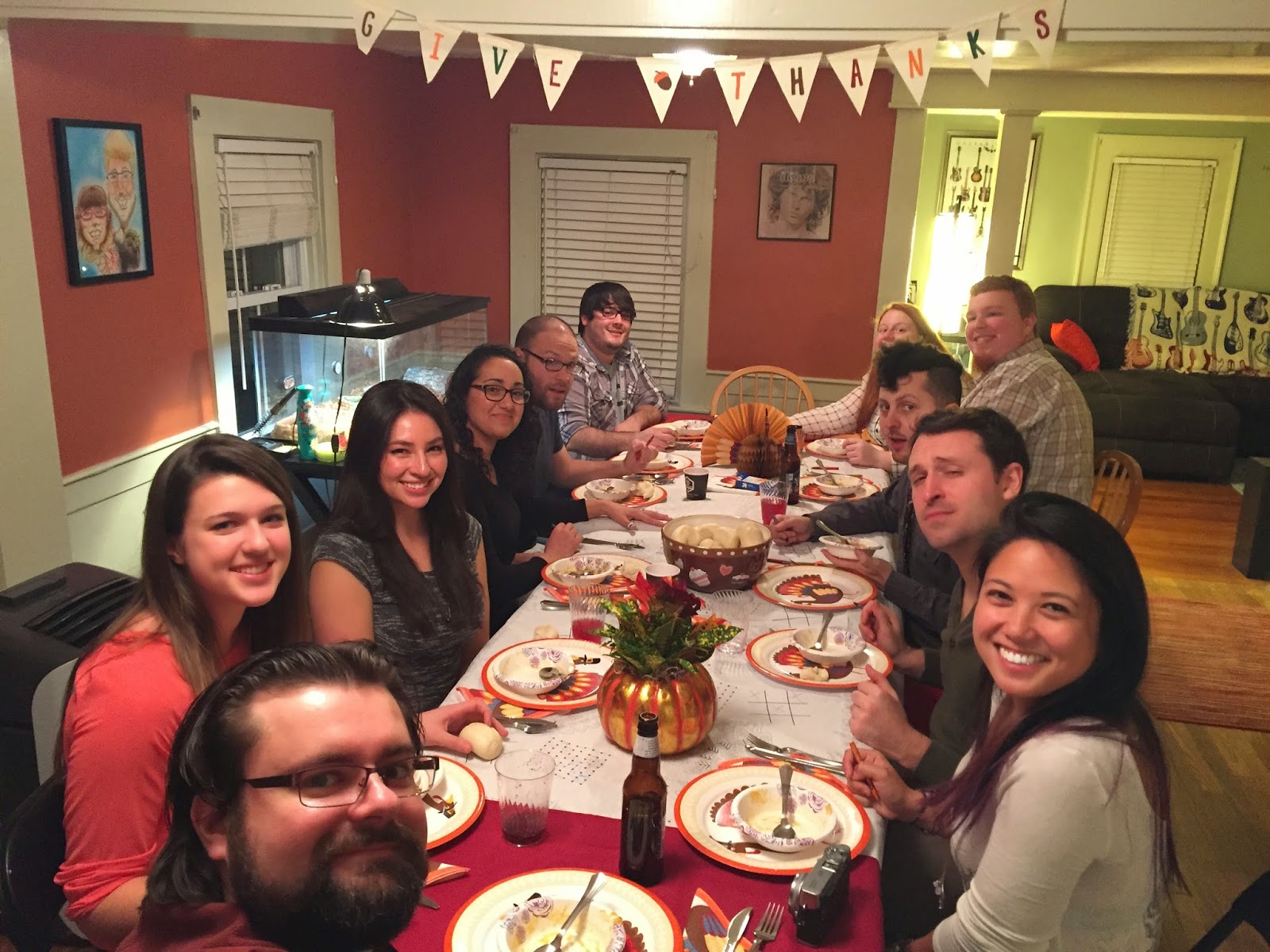 Needless to say, I was exhausted by night's end. I didn't want to clean a thing but I'm not one to leave it until the next day. What was convenient about a pot luck version of Thanksgiving was that everyone took their dishes home with them so I was actually left with minimum dirty dishes (thanks to plastic-ware and turkey covered party plates!). 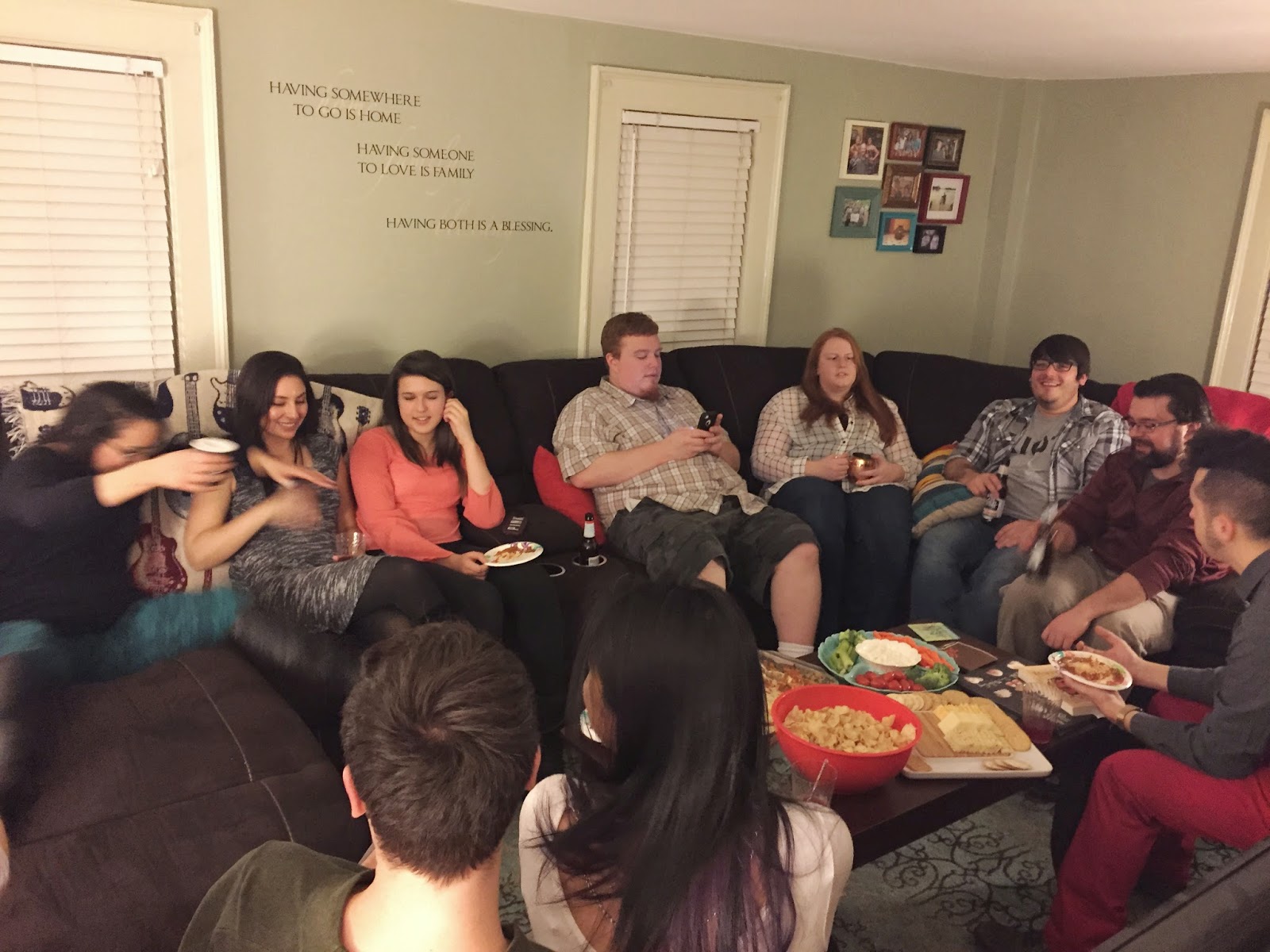 I also have incredibly considerate friends. I came out of the bathroom at some point to find Andy and Red working on the dishwasher - Andy was even rinsing first! I couldn't believe it but appreciated the help. It was really why we had Friendsgiving - our friends are exceptional!
Posted by SaraLily at 10:02 AM